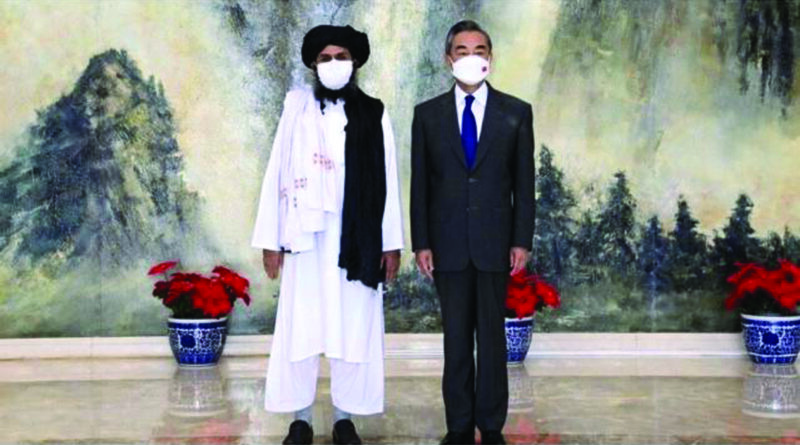 China once played a background role in Afghanistan but, post-US exit, Amit Agnihotri charts the growing convergence between Beijing and the new administration in Kabul

As the US counts the cost of its 20-year long war in Afghanistan – $2.3 trillion spent, 2,400 soldiers killed and its superpower image dented – China is eyeing the $1 trillion worth of minerals in the war-torn country, and greater influence.

The power vacuum created following the US exit from Afghanistan has given way to the China-Pakistan-Taliban nexus, now playing out in the region.

Even as the world grappled to come to terms with the reality in Afghanistan,China was one of the first countries to establish diplomatic contact with the Taliban and recognise their interim government, many members of which are UN-designated terrorists and are wanted by the US.

Weeks before the August 31 deadline for withdrawal of all US troops from Kabul, Chinese foreign minister Wang Yi met with a nine-member Taliban delegation in Tianjin on July 28, with the group’s founder Mullah Abdul Ghani Baradar, now deputy prime minister, in attendance.

In addition, the Chinese embassy in Kabul remained open during the chaotic August 15-31 period, when the western powers’ embassies had to be shut down for security reasons amid global focus on evacuating people.

Then, soon after the Taliban announced their government, China endorsed the new regime and sanctioned $31 million of aid for the food-starved country in a swift reach-out.

Soon after the Taliban announced their government, China endorsed the new regime and sanctioned $31 million of aid

Yet the past two decades were very different.

During this period China remained a low-key player in Afghanistan, limiting itself to providing financial aid for humanitarian projects such as hospitals and solar power stations. The Asian Dragon silently watched the US and NATO forces try to control and stabilise the war-torn country.

But now, post-US exit, China has come out of the shadows and is engaging with the Taliban, with the aim of asserting itself in the region.

While Beijing is keen to derive economic benefits from mineral-rich Afghanistan, without repeating the mistakes committed by the Soviet Union and the US, it is also wary of the Islamic hardliners now ruling Afghanistan.

Although Beijing takes solace from the fact that its protégé Pakistan has considerable influence on the Taliban, the Asian Dragon is concerned that the Uyghur Muslim fanatics operating from Afghanistan could be the source of a potential security threat.

However, Pakistan, which has nurtured the Taliban over the past two decades and termed their 2021 comeback as ‘liberation’, would be only too happy to use its ‘considerable influence’ over the proxy regime in Kabul to serve China’s strategic and commercial interests.Pakistan happily plays a subservient role because its economy is in the red, and the Imran Khan government is dependent on dole-outs from China.

The Pakistan-Taliban link was evident from the September visit of Pakistan’s Inter-Services Intelligence chief Lt Gen Faiz Hameed to Kabul, to iron out differences between the warring groups and oversee the formation of an interim government, at the same time as Pakistan Army chief Gen Qamar Javed Bajwa told the visiting UK foreign secretary Dominic Raab that he will ‘assist’ the Islamic warriors in the effort.

The ISI hosted a meeting of the intelligence chiefs of China, Russia and Iran to discuss the Afghanistan situation, even as the US Secretary of State Antony Blinken acknowledged before a Congressional panel that Pakistan was harbouring members of the Taliban.

Before the US decided to re-assess its complex love-hate relationship with Pakistan, the ISI prompted the Taliban to flag the ‘Kashmir’ issue to prick India, a challenger to China’s dominance in Asia.

While China knows it can pressure the Taliban via Islamabad, the widespread human rights violations of the Uyghur Muslims in its western Xinjiang province, which shares a narrow border with Afghanistan, remains the Asian Dragon’s soft underbelly.The constant refrain over these rights violations from the US, the UK and the United Nations further adds to Beijing’s anxiety.

China is worried that the Afghanistan-based Uyghur separatists, known as the East Turkestan Islamic Movement (ETIM), could incite its Muslim minorities in Xinjiang province and cause a revolt against Beijing’s alleged atrocities in the region.

To address its security concerns, therefore, China has extracted an assurance from the Taliban that the ETIM operatives have left Afghanistan and that the Islamic Emirate will not allow any terrorist entities on Afghan soil.

To push its economic interests, Beijing has proposed a road connecting Peshawar in Pakistan with Kabul, in order to aggressively extend the $60 billion China-Pakistan Economic Corridor (CPEC), the flagship project of its Belt and Road Initiative, into Afghanistan.The BRI seeks to link Beijing with Africa, Central Asia and Europe through an enormous network of ports, railways, roads and industrial parks.

Desperate for funds and political support from Beijing as it seeks global legitimacy, the Taliban have backed the BRI, saying the rich copper mines in Afghanistan can now be put back into operation and modernised, thanks to China.

China had previously signed a contract to mine copper in Mes Aynak, near Kabul, in 2008 but the project could not move ahead due to lack of approachable roads and electricity.Beijing is now negotiating with the Taliban to revive the project.

The growing convergence between Beijing and Kabul was evident from the remarks made by Taliban spokesperson Zabihullah Mujahid, who described China as the war-torn country’s pass to markets across the world.

In 2010, the US authorities valued Afghanistan’s untapped mineral wealth at around $1 trillion, which may be worth $3 trillion today.Of these, Afghanistan has vast reserves of lithium, vital for the modern, high-tech world and needed to push global transition from traditional to green-energy options.Lithium is used to make rechargeable batteries for a wide range of products like laptops, mobile phones, glass and polymers, and is a key component for electric vehicles.Both the US and the UK are keen to shift to EVs, while China has already said they should make up 40 percent of all auto sales by 2030.

The concern for the world is that China leads therare earths sector by providing around 85 percent of the global supply of rare earth elements and is home to two thirds of global supply of antimony and barite.

During the peak of the US-China trade war in 2019, Beijing threatened to regulate the supply of rare earths and other elements. The move could have caused shortages in the US high-tech industry – although globally, it is actually Bolivia that tops lithium deposits at 21 million tons, followed by Argentina (17 mt), Chile (9 mt), the US (6.8 mt), Australia (6.3 mt) and China (4.5 mt).

The Taliban have captured political power by force, but still face the challenge of running a cash-strapped country of 38 million people.They are looking for international aid and financial assistance, which may not come easy as the world powers would expect them to first show respect for human rights and global order.

The US has frozen $9.5 billion worth of Afghanistan’s resources and the International Monetary Fund has reduced financing for the war-torn country.

However, Beijing, which fancies itself as a global superpower, is willing to bail out the Islamic Emirate to further its strategic interests in Asia.

The catch for the Taliban, however, is how to avoid falling into Beijing’s infamous debt-traps that ruin the host economies in the long run.