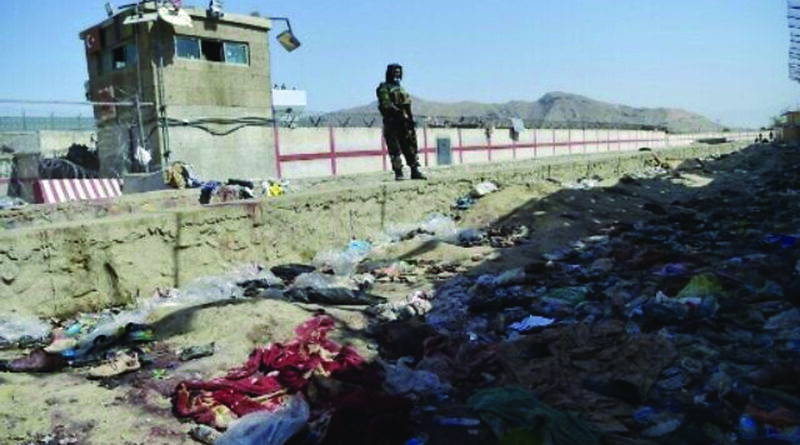 The face of moderation

Geopolitical pressures are set to produce a more temperate Taliban regime in the short-term – but, warns Rene Tebel, sharia remains a red line

With the rapid capture of almost all of Afghanistan’s territory, including the capital Kabul, there is initially little doubt that the Taliban will rule Afghanistan. On the 102nd anniversary of independence from the British colonial empire (Aug. 19, 2021), Taliban spokesman Zabiullah Mujahid tweeted the imminent proclamation of an ‘Islamic Emirate of Afghanistan’.

As an Islamic Emirate, Afghanistan will of course not be a Western-style democratic state, but will be based on Sharia law as conservatively interpreted by the Taliban. The power to govern will presumably rest with a 12-member governing council, a head of that council who will be the equivalent of a president, and his three deputies.

The Taliban is not described as a unified force; rather, ArabNews sees influential clergy and warlords alongside a ‘civilised’ political wing in Doha. There is also the Haqqani network, which is considered terrorist and is not insignificant in Kabul, and shura groups, including the influential Quetta Shura, vying for influence in the new power structure.

The fact that forces such as Mullah Abdul Ghani Baradar, a co-founder of the Taliban, are initially likely to prevail with the idea of an ‘inclusive’ government consisting of Taliban and non-Taliban elements (as a fig leaf?) is due to the constraints of realpolitik: the Taliban must first consolidate their power in Afghanistan and build a functioning state.

This is where the Taliban’s historical burden comes in. Many Afghans have dim memories of their rule from 1996 to 2001 in an internationally isolated, destitute, and religiously strict regime. As a result, the Taliban appeared purified in their first press conference and statements, promising that their future government would be ‘positively different’, as their spokesman Zabihullah Mujahid was quoted as saying in Pakistan’s The Express Tribune.

To do this, the Taliban must make allowances for traditional ruling structures and the 14 ethnic language groups, amnesty officials, soldiers, and pilots of the previous government, and try to keep skilled workers in the country to continue running state institutions.

Other problem areas lie in the vast difference between arch-conservative rural and urban areas, where Western policies and money have influenced lifestyles over the past two decades, and resistance to Taliban rule is most likely.

There is also the imminent threat of famine. Mary Ellen McGroarty, country director of the UN food agency in Afghanistan, said in an Aug. 18 video briefing that 40% of the crops had been destroyed and that Afghanistan was headed for a humanitarian catastrophe following its second severe drought in three years, the effects of the COVID-19 pandemic, and the approach of winter.

The Taliban must also assert its claim to power against rival factions. This primarily concerns the local branch of the Islamic State (IS), the so-called IS-Khorosan (IS-K). Only recently it drew attention to itself with the bloody attack on the airport in Kabul. In an interview, Haroun Rahimi, Assistant Professor of Law at the American University of Afghanistan, sees the Taliban’s willingness to talk to the US alone as a reason for the IS-K to consider them traitors. Moreover, IS stands for the idea of a transnational, universal caliphate, while the Taliban, despite their alignment with the Deobandi school and the influence of Pakistani madrassas, are described as national Afghan Islamists who reject a transnational jihad (at least for now). On the other hand, what speaks against the thesis of deep enmity between the Taliban and IS-K is that Pentagon spokesman John Kirby admitted, in response to a question from a Fox News reporter, that thousands of IS-Khorosan supporters were freed from two Afghan prisons in the wake of the Taliban takeover in mid-August.

Another front has emerged in the Panjshir Valley, where weapons have been doing the talking since August 31st following the breakdown of talks with the ‘Panjsir Resistance Front’.

The Taliban’s various promises to pursue a moderate policy are based, in part, on Afghanistan’s glaring economic weakness. David Mansfield and Graeme Smith published a 44-page report on the southwestern province of Nimroz in the ODI think tank, in which they show that the Taliban generate their receipts mainly through the 10-20%taxation of agricultural revenues, construction projects, fuel trading, and the collection of a road toll from trucks, though to a modest extent it is also through drug cultivation and human smuggling.

Nevertheless, a look at the World Bank’s website shows how much an Afghan government depends in the short term on foreign aid from international donors, which recently accounted for 75% of government spending. According to the website, there are hardly any industries in Afghanistan; 44%of the workforce is engaged in agriculture, which feeds 60%of households. The private sector is described by the World Bank as marginal. In contrast, corruption and the shadow economy are widespread. Other notable metrics include an unemployment rate of 11.2% for 2020, and an illiteracy rate in excess of 57% for those over 15, according to the UNESCO Institute for Lifelong Learning. However, this rate differs fundamentally between men (45%) and women (70.2%) on the one hand, and young people in the 15-24 age group, 35% of whom are illiterate.

The Taliban’s heavy dependence on foreign aid, the absence of which is driving inflation, exposes them to the power of money, with international donors freezing funds to Afghanistan and conditioning their continuation on certain demands. For example, the IMF is blocking access to resources and the World Bank is halting its financial support for aid and development projects for the time being. TOLO news quotes World Bank spokeswoman Marcela Sanchez-Bender in a statement to US broadcaster CNN that the World Bank is ‘[…] deeply concerned about the situation in Afghanistan and the impact on the country’s development prospects, especially for women’. In addition, the Taliban do not have access to the Afghan central bank’s foreign exchange reserves worth about $9.4 billion, most of which are stored at the Federal Reserve in New York, and they must also do without development aid funds, not least those from Germany. A deal is brewing with Western states like Germany: development aid for human and women’s rights, a government that does not consist only of Taliban, and an Afghanistan that is not a ‘new refuge for terrorism’, as German Foreign Minister Heiko Maas recently put it.

This thumbscrew puts the Taliban in a quandary. If they adjust their governing style for moderation, disappointed supporters could feed more radical currents such as the IS Khorosan; if they remain too rigid, they risk the continuation of sanctions and the acute absence of necessary aid funds.

However, the Taliban’s moderation should probably be seen primarily as a signal to their neighbours in the region and supporters. Their main wishes for the new masters of Afghanistan include a stable Afghanistan with a broad distribution of power, a moderate religious policy and a peaceful foreign policy to avoid Western sanctions or even renewed military intervention by foreign powers, and to create a prosperous environment for trade and investment. Here, the People’s Republic of China should be seen as the first addressee, which the Taliban regard as an important investor.

China, which officially does not interfere in the domestic politics of a trading partner, makes its stance on the Taliban contingent on the Taliban preventing the Turkestan Islamic Party (TIP) or ETIM from launching attacks from Afghanistan in the Xinjiang Uighur Autonomous Region (XUAR), which shares a 90-km border with Afghanistan along the Wakhan Corridor. With Pakistan, China is equally wary of the Tehrik-e-Taliban (TTP), who are fighting for an independent Pashtunistan in Pakistan. As recently as July, an attack on a bus carrying Chinese workers on their way to the Dasu Dam claimed the lives of nine Chinese and four Pakistanis.

India, in turn, fears attacks by terrorist groups such as the Jaish-e-Muhammad and the Lashkar-e-Tayyaba in Jammu and Kashmir, and ultimately Russia also measures the Taliban against jihadist attacks in Central Asia.

Pakistan and Iran, in turn, share concerns about minorities: Iran intervenes because of the Shiite Hazara minority, who make up about 20% of Afghanistan’s population. Pakistan’s Achilles’ heel is Afghanistan’s 1919 border demarcation with what was then British India, which was based on the ‘Durand Line’ of 1893. This divided the Pashtun settlement area, which is why today the Pashtuns make up more than 40%of the population in Afghanistan, while the majority of them live as a minority in Pakistan, where the majority of the population is Punjabi.

Probably the most explosive question at present is linked to a possible wave of refugees. On the land route, the route from Afghanistan via Iran and Turkey to the EU seems particularly plausible at first glance. But compared to the refugee movement in 2015, the current situation has changed completely.  Representatives of Turkey leave no doubt that Turkey does not want to be ‘anyone’s refugee warehouse’ (Presidential Spokesman Ibrahim Kalın), ‘does not have any obligation whatsoever to be a safe haven for Afghan refugees’ (President Recep Tayyip Erdoğan) and the EU should not believe that in giving Turkey money,‘we are giving [Turkey] money to keep Afghans in the country’ (Foreign Minister Mevlüt Çavuşoğlu).

This brusque attitude can be explained, on the one hand, because Turkey is already carrying a heavy load of Syrian refugees and the mood toward them in the country is apparently threatening to tilt and, on the other hand in particular, the protection of Greece’s border security with Turkey has reached a level that has thwarted Turkish attempts to blackmail migrants since the early summer of 2020.

Adding to the picture is an Anadolu Agency report on the reinforcement of border troops along the 295-km-long border with Iran, along with their being equipped with night vision devices, thermal cameras and UAVs. A modular border wall is also being expanded, with 58 observation towers and 45 communication towers, and is expected to be completed around the end of the year.

According to Understanding War, Russia also has the goal of ‘[…] preventing potentially destabilising refugee flows from Afghanistan’, and Russian President Vladimir Putin says, according to TASS, that ‘we don’t want militants under the disguise of refugees to appear [in Russia] again’.

Thus, for the time being, it seems likely that the Taliban will initially adopt a more ‘moderate’ line of government for reasons of internal consolidation, monetary pressure from the West, and at the request of its neighbouring states, thus consolidating its claim to power in the initial phase. However, this ‘moderate’ stance will still be strictly Sharia-oriented. There can be no doubt about that.

Rene Tebel is a contributor to Stratfor