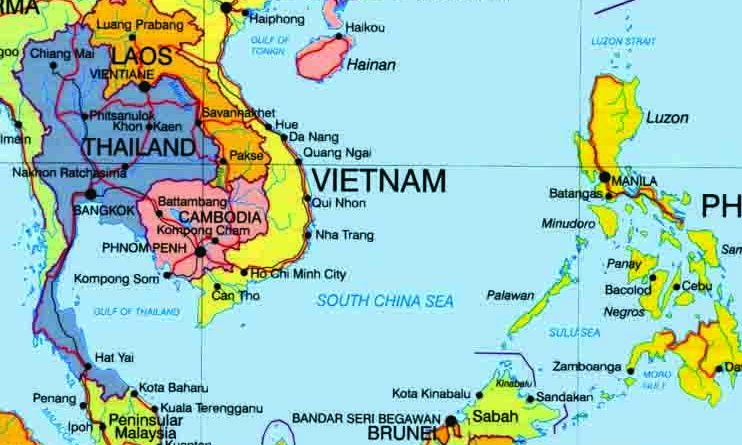 The recent creation of the AUKUS trilateral security pact has added one more set of initials to a part of the world that already has plenty. Nicholas Nugent  reports

Australia, the UK and the US are establishing a new ‘strategic partnership’. Named AUKUS for its three member nations, the alliance plans to build eight or more nuclear-powered submarines for Australia. Subsequently, the countries say they will work together in the Indo-Pacific region, cooperating on cyber technologies, artificial intelligence, quantum technologies and undersea capabilities.

The main advantage of nuclear-powered submarines, it was explained, is that they can stay underwater for several months, much longer than traditional diesel powered ones, which gives them far greater range. This transfer of nuclear technology to Australia indicates serious intent.

Alliance partners stressed there was no question of the Australian submarines carrying nuclear weapons, although to operate the vessels, Australia would become the first non-nuclear country to have access to highly enriched uranium (HEU). And if Canberra has this infrastructure in place, it opens up the possibility of US and UK nuclear-armed submarines operating in the region.

While the defence alliance did not identify any particular enemy, China was not slow to get the message that it was the target of the new deal. It accused the three countries of irresponsibility and of ‘overriding a commitment to nuclear non-proliferation’. Foreign Ministry spokesman Zhao Lijian said the three should ‘abandon the obsolete cold war zero sum mentality and… do more that is conducive to regional peace and stability and development’. Otherwise, it said, they will end up hurting their own interests.

The transfer of nuclear technology to Australia indicates serious intent

Elsewhere, reactions were of puzzlement. Why was France – which already had a contract to sell diesel submarines to Australia – not party to the alliance, since it builds and operates nuclear-powered submarines and has interests in the Pacific to protect, notably in New Caledonia and French Polynesia? According to Le Monde Diplomatique, France has 7,000 troops, 15 warships and 13 aircraft permanently stationed in the Asia-Pacific region. The same publication claimed that President Macron’s government is now part of ‘the US-led Indo-Pacific axis’.

Another question was why the deal did not come under the QUAD, an existing alliance to which Australia and the US, as well as Japan and India, belong. (India also operates nuclear-powered submarines.) There has been talk of expanding the QUAD to include Britain and France.

China’s growing reach into and beyond the South China Sea was demonstrated with the large number of military aircraft flying close to Taiwan around its national day on 10 October. The US, Britain, France, Australia, India and Japan held a joint naval exercise in the South China Sea from March to June, during the course of which American, British and French warships defied China by sailing through the strait which separates Taiwan from the Chinese mainland.

Also in October, Russian and Chinese naval vessels sailed through the strait which divides two of Japan’s main islands, Honshu and Hokkaido, during their own naval exercises. Both Russia and China have claims on outer islands that Japan regards as its own.

During the Vietnam war the United States formed a regional security alliance, the South East Asia Treaty Organisation (SEATO), an anti-communist organisation aimed in part at containing Chinese ambitions. It was dissolved in 1977. Some regional players, notably Australia, India and Japan, seem to want to construct something similar to address their concerns about China’s claims on islands within the South and East China Seas and the growing threat that it may try to invade Taiwan. China insists it only plans to ‘reunite’ Taiwan with the motherland.

The North Atlantic alliance, NATO, which provides for security in Europe, also weighed in, saying that China’s behaviour in the South China Sea posed a ‘systemic challenge’ and that it was becoming closer to NATO in military and technological terms. China’s diplomats accused NATO of ‘slandering China’s peaceful development’.

China is not above playing the alphabet game itself, though ostensibly not by way of military alliances. Its Belt and Road Initiative (BRI) has signed up 138 countries around the world. President Biden in June gained the support of the G7 group of major democracies (which link the US, UK, France, Germany, Italy, the European Union, Japan and Canada) for a plan to counter China’s BRI with his own Build Back Better (BBB) scheme, aimed at financing infrastructure in low and middle-income countries. This was seen as a direct response to China’s effort to win friends through the BRI.

Within Asia, China has been a leading player in the proposed Regional Comprehensive Economic Partnership (RCEP), a trade agreement which would link China, Japan, South Korea, Australia and New Zealand with the ten members of ASEAN (Brunei, Cambodia, Indonesia, Laos, Malaysia, Myanmar the Philippines, Singapore, Thailand and Vietnam). India pulled out discussions at a preparatory stage, fearing it would be flooded with cheap Chinese goods and that Australia and New Zealand would decimate its dairy industry.

ASEAN members have worries about China’s dominance in the region, both economic and military, though none would publicly express it for fear of provoking China – or even being punished trade-wise, as Australia was after it called for an enquiry into COVID-19’s origins. Some member states, though, have welcomed AUKUS and some have lodged protests at China’s South China Sea territorial claims.

In September China surprised its neighbours by applying to join the wider Comprehensive and Progressive Agreement for Trans-Pacific Partnership (CPTPP), which links signatories in Asia and Latin America. The lead player in the earlier Trans-Pacific Partnership (TPP) was the United States, but when President Trump pulled the US out of the trading alliance it was reborn as the CPTPP.

Commentators believe China may find it easier to gain admission now the US is no longer on board, although they point out it may have a hard time fulfilling conditions which limit government support for industry or state enterprises. If it were to be admitted, it will hope to play a leading role, being easily the region’s major trading power. Since joining the World Trade Organisation (WTO) in 2001, China has shown greater interest in joining free-trade groupings.

China’s application to join was immediately followed by one by Taiwan, ever anxious to  seek economic protection through trading alliances, though equally anxious to avoid provoking China by joining or endorsing defence alliances.

One conclusion from this proliferation of security and trade alliances is that the Indo-Pacific region remains tense because of China’s determination to ‘recover’ Taiwan and to control the South China Sea. Many East Asian nations feel threatened by China but are unwilling to join an anti-China grouping. Yet in trade, only India exhibits a fear of China’s economic power by refusing to sign the RCEP trade alliance.

As for Australia, it finds nothing inconsistent in being in trade pacts with China and being part of the QUAD. Joining AUKUS may be a result of its worsening trade relations with China.

Another conclusion is that the South China Sea remains one of the most dangerous parts of the world and no amount of trading partnerships will change that underlying truth. It is no wonder that European nations have deployed their navies in the region of late and that several, including nuclear powers Britain and France, have announced a ‘tilt’ in both trade and security towards the Indo-Pacific region.