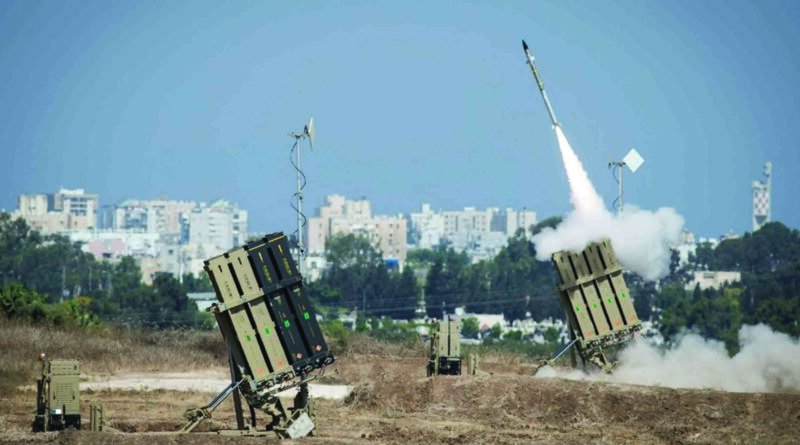 Opinion is divided over the endorsement of US funding for Israel’s $1bn Iron Dome defence system, as Israel continues to normalise relations with Arab nations. Amit Agnihotri reports

The $1 billion additional US aid for Israel’s Iron Dome (missile interception system), at a time when the Jewish nation is normalising its relations with the Arab countries, has left opinion divided in the world’s most powerful democracy.

The grant is not new. Israel has been a recipient of generous US aid over the past decades as America considers the state its most trusted ally in the volatile West Asian region.

Yet the $1 billion grant has raised eyebrows, as it is over and above the $3.8 billion per annum military funding that Tel Aviv gets from Washington. Out of that, around $500 million goes for the Iron Dome.

Recently, a legislation to approve the extra grant faced resistance from some Democrats in the US House of Representatives and later in the US Senate, where Republican Rand Paul refused to back the legislation, blocking its unanimous passage.

However, the funding got through with an overwhelming majority of US lawmakers (420:9) endorsing the legislation – though not before some of them asked if the grant was a defensive measure or would fuel Israel’s aggression in the region.

Israel and Palestine have been locked in a fierce battle of survival for decades and international efforts over the past 25 years have failed to work out peace between the warring neighbours. Israel captured the West Bank, East Jerusalem and Gaza in the 1967 war, and continues to occupy the territories which the Palestinians want for their future state.

Palestine recognised Israel as part of the 1993 Oslo accords, but lasting peace is still elusive.

The missile interception system was developed by Israel after the 2006 war with Hezbollah in Lebanon and each projectile cost is $50,000. The stock was depleted in May this year when the Israel-Palestine conflict flared up yet again.

As a result, confrontation between the two communities intensified near Jerusalem’s Old City and led to Israeli raids at the Al-Aqsa mosque. In retaliation, the Palestinian militant groups fired a large number of rockets from Hamas-controlled Gaza, which remains sealed off by Tel Aviv since 2005.

The Iron Dome intercepted the rockets before they could land in Israel, but the war killed 253 Palestinians, including 66 children, in Gaza, and 12 Israelis.

The $1 billion aid is expected to replenish the missile interception system but has led to a demand that US military aid to Israel should be linked to human rights.

Those against the extra grant are in a minority but still question the need for funds when Israel’s relations with the Arab nations are normalising, following the 2020 US-brokered Abraham Accords.

Another view is that US military funding to Israel is more than what the superpower contributes to the North Atlantic Treaty Organisation. Interestingly, while funding to NATO had been a concern for the previous Trump administration, military aid to Israel has never faced such criticism.

Those in favour point out that threats to the Jewish nation have not diminished, and support the need to boost its defence.

The passage of the funding bill, despite the hiccups, was attributed to the powerful pro-Israel lobbies that operate in the US.

One of them, the American Israel Public Affairs Committee, had said the move to block the Iron Dome funding bill would cost innocent lives, make war more likely and embolden Iran-backed terrorists.

Resolving the Israel-Palestine conflict remains a major challenge for the US, which is trying hard to push peace in West Asia.

Recently, Morocco became the sixth Arab nation to establish diplomatic relations with Israel as part of the 2020 Abraham Accords, while the UAE, Bahrain and Sudan had joined earlier. Until last year, only Egypt and Jordan had ties with Israel.

However, the Palestinians see the Abraham Accords as a betrayal by Arab nations, who promised to normalise relations with Israel only after the creation of an independent Palestinian state.

But the two-state solution to the Israel-Palestine conflict remains a pipe dream, as Israeli Prime Minister Naftali Bennett is opposed to the proposal, even as the international community sees it as the only way to resolve the discord.

The peace initiative has meant that Tel Aviv no longer needs to maintain clandestine contacts with the Arab nations and is able to do business with them openly.

In July, the UAE became the first Gulf country to open its embassy in Israel. The two countries are now set to extend their cooperation in space and look forward to a $1 trillion economic activity by 2031.

For the US, open friendships among the Gulf countries and Israel suit its policy against Iran, which continues to pose a challenge to Washington’s influence in the strategic West Asian region.

At a recent ceremony to mark the first anniversary of the Abraham Accords, the US Secretary of State Antony Blinken promised to take the process forward, while noting that the Biden administration wanted to widen the circle of peaceful diplomacy, because it was in the interest of countries across the region and around the world for Israel to be treated like any other nation.

Besides the Israel-Palestine conflict, regulating Iran’s nuclear power ambitions remains another major diplomatic and security challenge for the US in West Asia.

Iran, in fact, is a concern shared by the Abraham Accords participants as well as those outside the pact, namely Saudi Arabia and Qatar. For them Iran’s military presence in Syria and its support to hostile fighter groups across West Asia is a big threat to regional peace.

Israel accuses Iran of trying to develop nuclear weapons and says a nuclear-armed Islamic nation would pose an existential threat to the Jewish state. Tehran denies the charge.

Earlier, in 2015, Iran had joined an international nuclear deal, known as the Joint Comprehensive Plan of Action. But former US President Donald Trump unilaterally pulled out of the pact in 2018.

Since then, Iran’s attempts to enrich weapons-grade Uranium and its recent 25-year mega trade deal with China have left the US and its allies worried.

US President Joe Biden is trying hard to revive the 2015 nuclear deal and bring Iran back to the negotiating table, but Tehran is playing hardball by demanding that Washington first release its frozen assets, worth $10 billion.

Diplomacy apart, the US and Israel are also considering covert military operations against Iran, in case Tehran refuses to return to the nuclear deal.

Military aid to Tel Aviv has long allowed Washington to develop and test the latest defence technology and could soon result in its own missile interception system.

That, in a way, explains the flow of US funds to Israel.