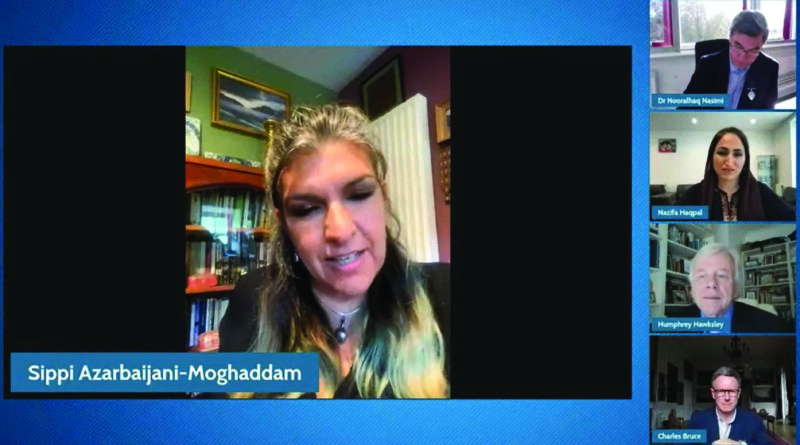 With the Taliban back at the helm in Afghanistan and the country’s humanitarian and economic crises deepening, many Afghans are living in fear, especially women and minority groups. Despite the group’s claim to be more moderate, reports of violence by Taliban forces against women, journalists and human rights activists suggest otherwise.

To discuss prospects for women’s/human rights under the Taliban, The Democracy Forum assembled a virtual panel of experts, moderated by former BBC Asia Correspondent Humphrey Hawksley, and introduced by the Forum’s President Lord Bruce.

With reference to a recent report, compiled jointly by the Afghanistan Independent Human Rights Commission, the International Federation for Human Rights and the World Organisation against Torture, Lord Bruce said the Taliban are steadily dismantling human rights gains made over the last 20 years. Nowhere is this more evident than in the treatment of women, with the Taliban having effectively isolated and silenced the female population of their country and left them unprotected by the state. Given such rights erosions, violations and denials of democracy, Lord Bruce wondered if even a recent announcement by the UNHRC, that it would appointa Special Rapporteur for one year to monitor human rights in Afghanistan, would be a sufficient response.

Examining Taliban-China relations through the prism of human rights, Dr C. Christine Fair of Georgetown University expressed scepticism for the view, held by certain US analysts, that China will exert some kind of moderating influence on the Taliban, due to its concerns over Uighur terrorism and the prospect that Afghanistan, under the Taliban, might be a haven for international terrorism. This, said Dr Fair, is to misunderstand and misunderstate the long duration of Chinese-Taliban cooperation, including the extensive Memorandum of Agreement, signed by China and the Taliban on the eve of 9/11, saying that Beijing would invest in the Taliban and its government, with the proviso that Afghanistan would not be a place from which terrorist attacks were planned against China or Chinese interests. Dr Fair reminded the audience that China had also been on the verge of signing a similar MoA with Osama bin Laden, who never called out China’s atrocities against its Uighur and Muslim populations.

As the single largest investor in Afghanistan, with Afghan rare metals aiding China’s economic growth, Beijing’s claims that it wants to see an inclusive government in Kabul are, said Dr Fair, ‘absurd’, especially when one looks at the Chinese government itself. What Beijing expects from the Taliban, in exchange for financial support, is a limited scope of security that will protect Chinese commercial interests, with the Taliban ensuring no attacks against China or its interests are planned or executed from Afghanistan. Dr Fair compared this with what happens in Pakistan, with the Pakistan Taliban a direct blow-back effect of the Taliban in Afghanistan, so that peace in Pakistan is not compatible with Taliban rule in Afghanistan – something China will come to learn.

China and Pakistan were also touched on by Dr Nooralhaq Nasimi, Founder & Director of the Afghanistan & Central Asian Association. With the USSR, Pakistan and Iran having caused many problems for Afghanistan, he hoped China would not repeat similar mistakes. Indeed, the future was, he said, of greater concern than the past: since the Taliban took over, the people of Afghanistan were suffering homelessness and food shortages, which would be exacerbated in the coming winter months. Dr Nasimi also lamented the lack of representation of Afghan women at the United Nations and in local politics, and highlighted the need for lobbying at international level to stop Taliban atrocities, and to provide funding for internally displaced people in Afghanistan. But he also highlighted some positive measures, such as grassroots activities by his own organisation, and others, in Kabul, including the introduction of Citizens’ Advice Centres, training and workshops.

Nargis Nehan, founder of EQUALITY for Peace and Democracy and a former Afghan Minister of Mines and Petroleum, also took a cautiously optimistic position, stressing that the many gains made over the past 20 years, and the struggle by Afghanistan’s women and youth, show that the nation is not a ‘lost cause’ or ‘failed project’, as so many believe. Afghan women’s place at the forefront of demanding human rights, despite Taliban threats, reveal they are not victims, said Nehan, and this is a fight of liberal values against extremism. The Taliban may not have changed, but Afghan women have changed, and resistance will be fomented – not only from women but also other groups, due to the pressures of poverty, etc.

Regarding both the previous Afghan government and the Taliban, Nehan believed neither really engaged with ordinary people, their concerns and frustrations. For true inclusivity to happen in government, people from different ethnicities, ideologies, gender groups, and so on, must be represented. She hoped the international community, by which Afghans felt abandoned, would rally, helping to provide aid, education and support in the war against extremism.

Social scientist Sippi Azarbaijani-Moghaddam offered a historical perspective on what we see in Afghanistan today, discussing her experiences with working on women’s programmes under the Taliban between 1996 and 2001.One of the most interesting things about the Taliban from that time, she said, is that they were obsessed with controlling public spaces, and ‘cleansing’ them of ‘corruption’ and ‘disorder’. But the public and private spheres were treated differently – ‘discreet’ girls’ schools were accepted, as long as kept out of the public sphere and did not cause public discord. On attitudes towards women, Azarbaijani-Moghaddam likened the Taliban’s to those of certain other Islamic, which see women as a discordant, corrupting influence that need to be heavily controlled in public spaces.

Yet the mainstay of her discussions with the Taliban centred around pragmatism. As long as women’s activities were of practical value, they were not stopped. She cited the example of General Suhaila, an invaluable female trauma surgeon who treated injured Taliban, and who refused to wear the burqa in her hospital. The Taliban, therefore, don’t pick battles they can’t win, although they will be draconian towards certain groups – so, concluded, Azarbaijani-Moghaddam, there is no real hope for human rights as we in the West would consider them.

Former Afghan diplomat Nazifa Haqpal examined the role ofthe younger generation of Afghans, their activism and the importance of supporting them. By amplifying Afghan voices, and applying other pressures on the Taliban, Haqpal believed the international community could hold the Taliban to account, at least to some degree, with regard to fundamental human rights principles, particularly women’s rights.She felt disappointment at the betrayal of the Afghan people by their government, leaving them to the mercy of the Taliban, which are extremist interpreters of Islam. In fact, given the Taliban’s limited education and knowledge of science, politics, Islamic law, etc, the Afghan people can challenge the group through the teachings of Islam. Haqpal added that Taliban attitudes to women are in complete contradiction of Afghan history, since women previously had status, education, etc. So, women’s rights are not a new phenomenon in Afghanistan, she said – it is oppression that is relatively new.

In the current circumstances, the international community must take a collective approach, and should draw protective lines around all human rights and media freedoms. With this support, Afghanistan can, Haqpal concluded, challenge the Taliban from within.