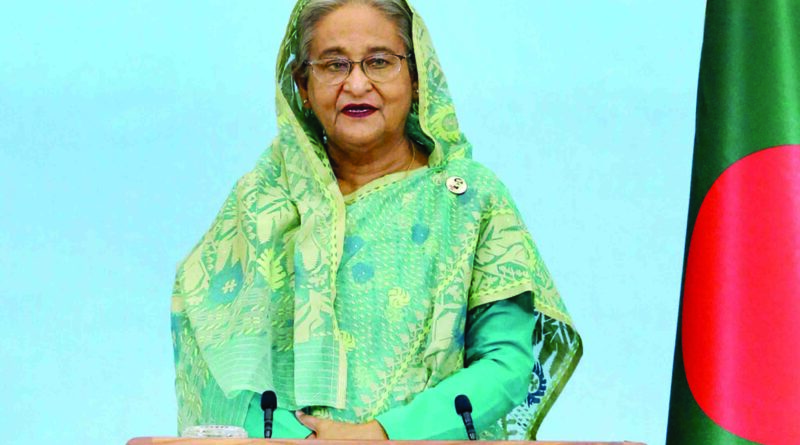 Amidst violence and uncertainty in Afghanistan, Mohamed Nasheed, former President of the Republic of Maldives, charts how Bangladeshi Premier Sheikh Hasina continues to lead the fight for vulnerable countries’climate survival

As the world gears up for this year’s important United Nations climate negotiations, COP26, to be held in Scotland, there is one world leader who has been fighting hard for the rights of climate-vulnerable, developing countries: Bangladeshi Prime Minister Sheikh Hasina.

The Prime Minister holds the presidency of the Climate Vulnerable Forum (CVF), a 48-strong group of vulnerable countries, which are pushing to ensure that global temperatures do not breach the all-important 1.5 degrees ceiling.

So far, the world has experienced 1.1 degrees of warming, and the weather is already out of control. If warming shoots past 1.5 degrees, scientists say vulnerable countries, especially low-lying ones such as Bangladesh and my country, the Maldives, will face long-term peril.

The 1.5 degrees ceiling was agreed by world leaders at the 2015 UN climate meeting in Paris. The CVF was instrumental in getting countries to agree on 1.5. Now the fight is on to ensure that countries, especially big emitters of greenhouse gasses such as the United States and China, cut emissions quickly enough to stay within 1.5. Sheikh Hasina is leading this fight.

Speaking alongside 70 other world leaders at the virtual Climate Ambition Summit last December, the Prime Minister warned on behalf of the CVF that the world is nowhere near meeting the 1.5 ºC target. And she has since been warning the world of the dangers of inaction.

Under Sheikh Hasina’s leadership, Bangladesh is becoming the world’s driving force on climate action. Not only has the Prime Minister been leading the diplomatic charge in support of 1.5, at home Bangladesh is also showing leadership by pursuing clean development.

The Prime Minister announced last year that her government is undertaking the ‘Mujib Climate Prosperity Plan’, a strategy for achieving economic prosperity while at the same time reducing planet-heating emissions. Since Bangladesh started on its plan, over 30 other CVF member countries have said they intend to implement Prosperity Plans of their own.

As the world looks ahead to COP26 at the end of October, countries and people across the world look to Sheikh Hasina, supported by other CVF leaders, to lead a negotiating alliance to secure strong outcomes – not only to stop climate heating going above 1.5 degrees, but also on important issues such as climate finance and adaptation.

As the country celebrates the birth centenary of the Father of the Nation, Bangabandhu Sheikh Mujibur Rahman, Bangladesh is standing up for the right of vulnerable countries everywhere. On this most important of global issues, Bangladesh is taking its place as a major leader in global affairs.

Mohamed Nasheed is former President of the Republic of the Maldives, current Speaker of the Maldivian Majlis, and CVF ambassador for ambition