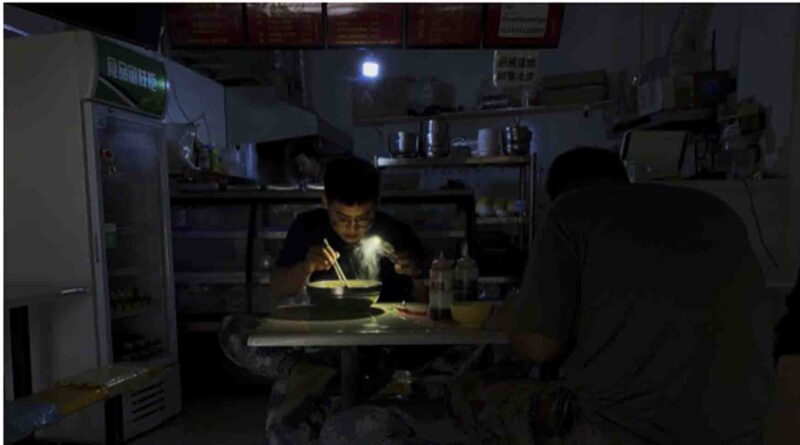 Lights out over China

An acute power shortage in China has led to the closure of many factories and businesses, pushing up food prices and causing a serious blow to the economy.  Duncan Bartlett examines the roots of the problem and asks what will happen to China’s ambitious climate change targets

In the cold, northern provinces of China, power supply disruption has become an unwelcome part of life. People are frustrated when street lights are dimmed at night, or elevators in tall buildings are put out of service. The impact on the economy is severe.

These shortages have hindered the chances of a robust recovery, following the slump brought about by the coronavirus crisis. By mid-October, economists surveyed by Bloomberg were offering estimates of economic expansion for the third quarter of this year in a range from 5.8% to a low of just 4.5%.

For China, which enjoyed double digit economic growth for decades, this is a cause for concern. Given the country’s status as an economic superpower, as well as a major trading partner for all Asian nations, the power crunch has significant global implications.

At the heart of the problem is coal. Months of shortages have left power stations without the fuel they need to produce electricity. China still depends on coal for about two-thirds of its energy mix, despite efforts to reduce this proportion by switching to more renewables, such as solar and wind.

At the UN General Assembly in September, President Xi Jinping pledged that his country would stop funding coal power projects overseas. However, he was unable to promise the closure of China’s own highly polluting coal-based energy generation system.

The power shortages are at their most acute in China’s north-east – where temperatures can drop as low as minus 20 degrees celsius in the winter – and have also been felt across much of the country. Energy use is increasing in factories, amid record demands for Chinese exports.

The authorities in Beijing have responded with a two-pronged approach. Firstly, China is trying to import more coal from places such as Indonesia. (Before that, Australia was also a major coal supplier to China – in 2019, some 38% of Chinese thermal coal imports came from Australia. However, last year Beijing reportedly ordered state-owned energy companies and steel mills to stop importing Australian coal following a rise in diplomatic tension.) This has contributed to a surge in the cost of coal required in places as far away as Britain and Spain, and many other countries, which also face an energy crunch this winter.

Secondly, the Chinese government has ordered domestic coal mines to ramp up production. The government has removed most of the price caps on the power generating firms, allowing them to charge more to their customers, including small businesses. Electricity prices have therefore surged by as much as 20% in some parts of China, according to the Financial Times.

Still, there is a wide gap between supply and demand. In Guangdong Province, China’s manufacturing hub, officials said almost 150,000 companies were hit by energy shortages in September.

This has a knock-on effect on food, with retailers passing on higher prices for staples such as soy sauce, bread and rice, as well as for fish, which requires a lot of electricity to refrigerate it and keep it fresh. There are reports of small shops and restaurants in China using their own generators to power lights and cooling systems, even though the machines are not legally allowed.

Coal is also needed to supply electricity to factories which produce items designed to promote the switch to cleaner energy, such as electric vehicle batteries and solar panels.

President Xi Jinping faces tough choices as he seeks to steer China away from its dependence on coal and prepare it to meet his ambitious target to become carbon neutral within a generation. The central government in Beijing continues to press businesses and provincial governments to increase their investments in renewable energy.

China burns more coal than the rest of the world combined and is the number two consumer of oil, after the United States. America has also been using more coal than expected this year, as its economy rebounds from the coronavirus pandemic

In November, President Xi is due to take part in the Cop-26 UN Climate Change Conference in Glasgow. He will join the event by video link, rather than flying to the UK. This will reduce his carbon footprint, but delegates at the event in Scotland will have legitimate questions about how much credibility China has vis-à-vis its climate change promises while coal miners are digging deeper and the power stations are producing millions of tonnes of CO2 emissions.

Ultimately, China must address a problem which faces many nations in Asia and around the world. The systems currently used to power economies create a voracious demand for energy. Yet the longer China depends upon coal, it must accept its notorious reputation as the world’s largest emitter of greenhouse gases, by a wide margin.

Duncan Bartlett is the Editor of Asian Affairs and a Research Associate at the SOAS China Institute. He is currently teaching diplomacy and international relations on the Economist Executive Education course, `A New Global Order`