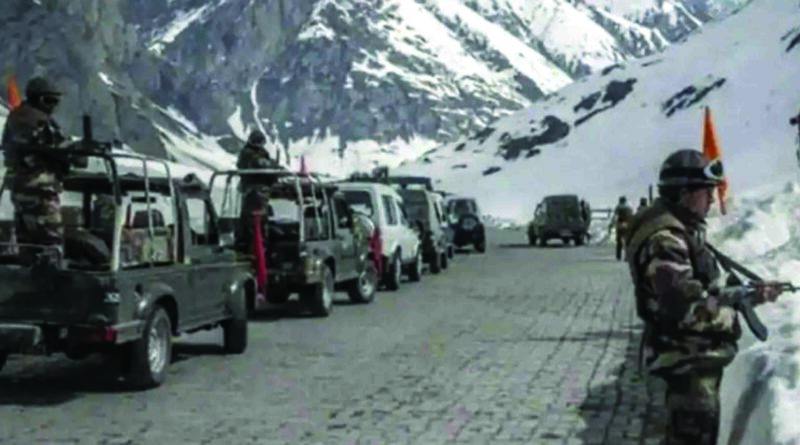 Despite continued border tensions between the two Asian neighbours, and dialogue at an impasse, Sudha Ramachandran sees some cause for hope

On October 10, Indian and Chinese military commanders met for the 13th round of talks on disengagement of troops at Hot Springs, one of the ‘friction areas’ in the western sector of the disputed India-China border. However, the dialogue ended without agreement; worse, the two sides ended by exchanging sharp words as they blamed each other for the failed negotiations.

In a statement issued a day after the talks, the Indian Army said it had ‘made constructive suggestions’ for resolving the dispute at various ‘friction areas’ along the Line of Actual Control (LAC) in eastern Ladakh, but the Chinese were ‘not agreeable’ to these suggestions. Nor did the Chinese ‘provide any forward-looking proposals’,it said.

Earlier, the spokesperson for the Western Theatre Command of the People’s Liberation Army (PLA) had accused India of persisting with ‘unreasonable and unrealistic demands, which added difficulties to the negotiations’.

China’s state-run Global Times followed up on that with an editorial that admonished India for not having ‘developed a correct attitude in the negotiations’ and making ‘unrealistic demands not in line with the real situation or its strength’.

‘New Delhi needs to be clear about one thing: it will not get the border the way it wants,’ the editorial said. ‘If it starts a war, it will definitely lose. Any political manoeuvering and pressure will be ignored by China.’

Several rounds of talks have already taken place between Indian and Chinese political leaders, diplomats, security officials and military commanders to scale down tensions that intensified after Indian and Chinese soldiers clashed violently at Galwan Valley on June 14-15 last year. In the face-off that night, there were serious casualties on both sides – the first time in 45 years that fatalities had resulted from soldiers clashing at the LAC, the defacto border between the two countries.

Is China testing India to see how far it can go without facing resistance?

This current crisis goes back to April-May last year, when PLA soldiers carried out incursions at several points along the LAC in Ladakh, into territory hitherto controlled by India. They not only built fortified structures there but also prevented Indian soldiers from entering these areas, thus changing the status quo on the ground.

It was amid this tension that the PLA soldiers, after agreeing to pull back at Galwan Valley, returned to attack the Indian troops.

In the 17 months since, Indian and Chinese soldiers have continued to clash intermittently. The two sides have reinforced their positions by deploying tens of thousands of soldiers, tanks and aircraft, and building infrastructure to sustain their long-term presence through the Himalayan winter.

However, there are some pluses: talks have resulted in troop disengagement happening at Galwan Valley in July 2020, Pangong Tso in February 2021 and Gogra in August 2021.

But Indian analysts point out that things are not going well for India, which is conceding more than the Chinese. Agreements on disengagement happened because India was willing to compromise. The Chinese were willing to disengage from Pangong Tso only after India returned Kailash Heights. Besides, the two sides have apparently agreed on buffer zones in ‘friction areas’, but these lie more on the Indian side of the LAC.

This means the LAC is shifting westwards.

According to reports, the Chinese have refused to disengage from Hot Springs or even discuss the situation at Demchok and Depsang.

In February this year, China was reportedly willing to pull back from Hot Springs. However, at the 13th round, it refused to budge from the area. There is a perceptible hardening of Chinese positions.

Incursions are happening in other sectors of the LAC too. On August 30, around 100 PLA soldiers crossed the LAC at Barahoti in the middle sector, where they pushed 5 km into territory on the Indian side of the LAC and remained there for three hours before withdrawing.  On September 30, there was an incursion intoTawang in the LAC’s eastern sector,which triggered a ‘minor face-off’.

These recent incursions raise troubling questions. Is China testing India to see how far it can go without facing resistance? Is the PLA planning to broaden the conflict to include the middle and eastern sectors too? Is it considering another short, sharp face-off to teach India a lesson, to remind it of its place?

A day before the 13th round of talks, Indian Army chief Manoj Mukund Naravane said that China’s rapid infrastructure construction on its side of the LAC is worrying, and that it means the PLA are ‘here to stay’.

With both armies digging their heels in, it does seem that Indian and Chinese soldiers will have to prepare for the long haul through yet another biting winter in the Himalayas.

Yet amid the dark clouds looming over the Himalayas and the deepening gloom, there is a glint of silver lining.

The 13th round of talks seem to have not collapsed altogether, as neither side has said it is walking away from the negotiating table. Indeed, the Indian Army said in its statement after the talks that the ‘two sides have agreed to maintain communications and also to maintain stability on the ground’.

There is, therefore, a faint flicker of light at the end of the tunnel.