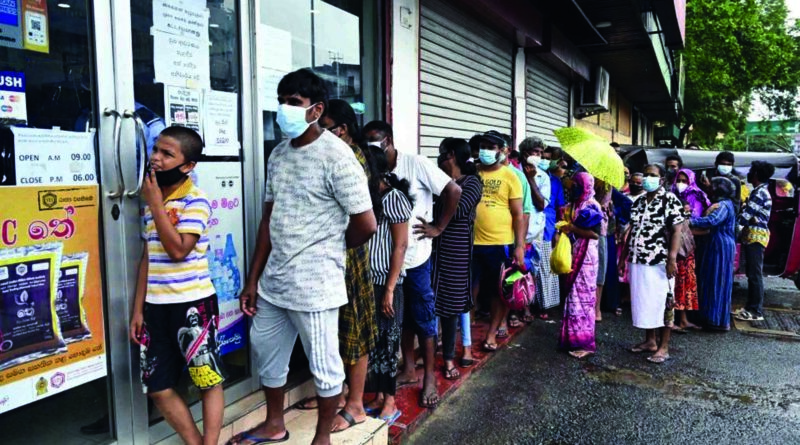 Neville de Silva charts the recent volte-face that characterises a government in turmoil, both at home and abroad

A sudden and unforeseen U-turn has shattered the hopes of many and the great expectations of others that Sri Lanka’s seeming intransigence on national reconciliation was beginning to thaw.

How wrong could one be.

As I wrote in Asian Affairs’ October issue, President Rajapaksa held tenaciously to his view that Sri Lanka’s multiple problems could only be solved through domestic mechanisms, not international interference or intervention.

But he told Mr Guterres that he was ready and willing to engage in talks with the Tamil diaspora to resolve issues, presumably the vexing problem of national reconciliation. This continues to be devil the country 11 years after the May 2009 military defeat of the secessionist Liberation Tigers of Tamil Eelam (LTTE), popularly known as the Tamil Tigers, after a near three-decade-long war.

However, this is easier said than done. Still, Mr Rajapaksa’s apparent concession raised domestic hopes, especially among minority Tamils and Muslims and sections of the Sinhala majority longing for a permanent peace.

It also enthused sections of the international community that had Sri Lanka under the microscope and were tightening the screws on Colombo for dragging its leaden feet over its supposed violation of human rights and international humanitarian law, and its increasing curtailment of civil rights. They saw Rajapaksa reaching out to the non-resident Tamils as an encouraging opening they could pursue.

Yet just one month after President Rajapaksa’s pledge to invite the Tamil diaspora, it was shot down in flames by Foreign Minister Prof. GL Peiris, who told an interviewer in Colombo that the government will not talk to diaspora groups that were proscribed by the government, as this would violate Sri Lankan law.

The government has made a mess of its agricultural policy

That was a specious, if not ludicrous, argument. As a former professor of law, Prof. Peiris should know that not even the Constitution is sacrosanct, as the Rajapaksa governments have shown, annulling the 17th and 19th amendments(17A &19A) to the constitution.

Introduced by the previous coalition administration of Maithripala Sirisena and Ranil Wickremesinghe, 19A had several key democratic reforms on top of what was pledged in 17A. They included several independent commissions answerable to a Constitutional Council,enhanced powers for the prime minister and parliament, and Freedom of Information, all strengthening the country’s democratic governance.

The Gotabaya Rajapaksa government replaced 19A with 20A, which swept aside the limitations placed on presidential power and neutralised all the other democratic measures like the independent commissions, bringing them under the direct control of an all-powerful president.

He was now empowered to appoint judges, members of the election commission, the chief of police, the public service commission and others, politicising the whole administrative structure and centralising power in the hands of the executive.

All that was retained was the two-term limit imposed on an elected president.

If  the constitution can be so altered, what prevents a government from changing existing law, as this government is now trying to do, by amending the Criminal Procedure Code to remove a cardinal principal of natural justice observed by most countries around the world (except perhaps a few,such as China)?

One of the most obnoxious features of the amending bill is that suspects arrested for an offence do not have to be physically produced before a magistrate when the suspect’s detention oran extension of the remand period is sought.So the suspect is denied the opportunity to challenge the legality of his/her arrest.S/he cannot even protest before a magistrate if s/he has been assaulted or tortured, which is not a rare occurrence in this part of the world.

All this is being done in the name of ‘modernising’ the law, when what is actually happening is a return to the law of the jungle. It is occurring even before the amendment has been approved by parliament. The media recently reported that a person who claimed to have been assaulted by the police in eastern Batticaloa district was not produced before the magistrate when his detention was sought.

Prof.Peiris surely knows that on several occasions, Tamil groups that have been proscribed by the Sri Lanka government have had the ban lifted. He should surely remember that in 2002, when he led the government delegation to peace talks with the LTTE in Thailand, Sri Lanka de-proscribed the LTTE as a precondition of its participation in the talks.

He should also recall that in March 2014, the Mahinda Rajapaksa government, of which he was a part, banned 16 Tamil groups and 400 individuals after the UN Human Rights Council passed a tough resolution against Sri Lanka.

The ban on most of them was lifted by the 2015 Sirisena-Wickremesinghe government, which was hoping to lobby the Tamil diaspora groups for assistance to open a reconciliation and accountability process.

In March 2021 the ruling Rajapaksa government – headed by the Sri Lanka People’s Front (SLPP), of which Prof Peiris was chairman – once again proscribed most of the prominent Tamil groups and some 300 individuals.

That was seven months ago, a fact the government could hardly have forgotten when it seemed to extend its hand to Tamil groups abroad. Now the foreign minister dispenses with this apparent olive branch by refusing to lift the ban on the main, influential Tamil organisations.

It is such confusion that characterises this government’s policy-making and actions,which President Rajapaksa tangentially admitted in a recent speech. The government has made a mess of its agricultural policy, banning the immediate use of chemical fertiliser, a rash, ill-conceived and uninformed strategy that has driven many of Sri Lanka’s farmers to the streets instead of the fields, several of which are lying fallow.

All professional scientists and agricultural experts condemned this policy,leading to the government slowly reversing it and importing some chemical fertilisers, which the Agriculture Minister adamantly called ‘organic’ fertilisers, only to be roundly exposed by highly qualified academics and scientists.

Adding to that mess, a government politician re-installed as Governor of the Central Bank was, in violation of existing norms,scouring the Gulf States last month with begging bowl in hand, metaphorically speaking, stubbornly refusing to accept economists’ advice to seek IMF assistance to plug the huge leak in the country’s fast dwindling foreign reserves,and saying Sri Lanka can manage.

Meanwhile, a population hard hit by sharply rising prices of rice, sugar, milk foods, gas and other commodities, and struggling to survive, awaits with growing anxiety what new horrors will befall them in the forthcoming budget.

To those sections of the international community that have their eyes glued on Sri Lanka as it wavers and engages in quick policy reverses, while tightening its grip on society, the recent U-turn on talking to the Tamil diaspora must surely seem like nothing more than a cynical exercise in magnanimity.