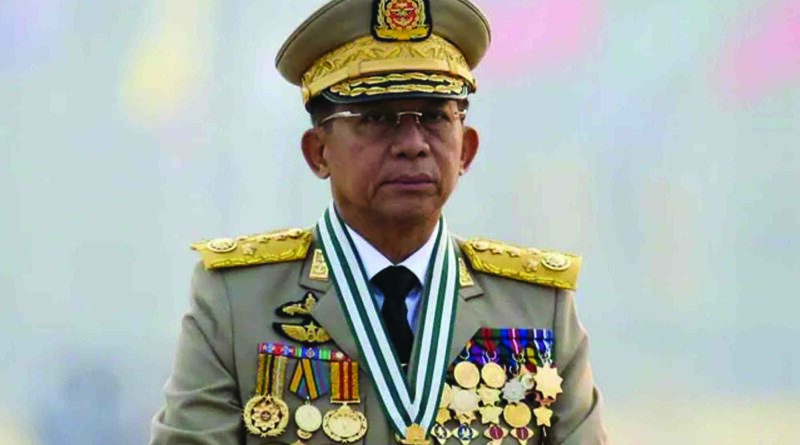 The bitter fight for Myanmar

The resistance against the military in Myanmar is becoming increasingly well-organised and violent, but the unrest is causing poverty, hardship and a refugee crisis. Robert Bociaga reports

A war was declared in Myanmar in September this year. The civilian National Unity Government (NUG) has vowed to fight Myanmar’s military regime, which took control of the nation in a coup in early February.

The military junta suffered huge losses in September, with more than 1,500 soldiers killed in a single campaign. Today, the fighting continues.

Attacks are conducted by the People’s Defense Forces (PDF), which often ambush patrolling soldiers in both urban and rural areas. Eye-witnesses say that people have taken up weapons, including slingshots, homemade air-guns and firearms, to resist the junta.

The opposition also includes members of armed organisations that have defied the generals for decades. Their leaders have vowed to intensify the assaults.

Myanmar`s former leader, Aung San Suu Kyi, has been held in an undisclosed location since the 1 February coup, with no means of communicating with the outside world, other than through her lawyers. She is charged with a range of offences, including breaking coronavirus protocols, illegally importing and possessing two-way radios and violating Myanmar’s officials secrets law. The charges against her effectively block her from participating in politics.

Anger over her treatment is one of the reasons her supporters are challenging the junta, but other factors are also in play. ‘The members of the military junta assume that Aung San Suu Kyi is the key, however she is neither leading nor playing a role in the revolution,’ claims Aung Myat, one of the resistance fighters. ‘People realise that she is not the paramount figure anymore. Federal democracy is the issue.’

It is hard to estimate the number of people joining the resistance but its leaders say ranks are swelled by defectors from the Tatmadaw, as the Myanmar army is known.

The EU, the US and ASEAN have sought to find a diplomatic solution, so far without success

Alongside the violence, the regime is also being beaten down by civil disobedience, which is aimed at undermining the regime’s capability to govern. Some people try to boycott the junta by not working in the public sector or by refusing to pay their electricity bills. This has created crises in the power sector, affecting supply. Economic losses for the government are severe and have impacted its foreign currency reserves, causing a government deficit. As a result, fuel prices have skyrocketed, stopping the operations of many freight firms.

The unrest in Myanmar following the coup has also disrupted foreign oil and gas companies, leading some to suspend their activities.  The junta says it intends to proceed with the Hatgyi hydropower dam on the Salween River. Junta leader General Min Aung Hlaing has been accused of ignoring environmental concerns and kowtowing to China, which would fund the project.

Seventeen dams have been built by Chinese firms and China has also invested in other areas of renewable energy such as Liquid Natural Gas (LNG). However, prospects for more investments in the sector have dimmed and Myanmar’s role in China’s One Belt One Road initiative has been called into question.

The EU, the US and ASEAN have sought to find a diplomatic solution, so far without success. Southeast Asia’s foreign ministers decided to exclude Myanmar’s military leadership from attending an annual summit of the region`s governments. This followed the junta’s decision not to let ASEAN’s representative meet Aung San Suu Kyi.

The EU parliament has passed a resolution, which heralds the ousted politicians – not the junta generals – as the only legitimate representatives of the democratic wishes of the people of Myanmar. This is in line with the wishes of Myanmar protesters, who are also seeking support from the UN.

However, the UN Security Council has failed to pass a legally binding arms embargo on the Myanmar military, due to objections by China and Russia. As a result, the army continues to purchase arms from abroad.

The social costs of the coup and the subsequent fighting have been enormous. It is estimated that more than 200,000 people have been internally displaced by the conflict, with a significant number of refugees having flown to Thailand and India.

By the end of this year, it is forecast that half of Myanmar’s population will be living below the poverty line, with major concerns about food insecurity.

‘For the revolution to succeed, we must continue our efforts to come together over a shared vision that benefits nor only the majority, but also promotes the self-determination of ethnic people,’ insists Thet Swe Win, a Myanmar human rights activist.

But despite the calls for cooperation, some ethnic armed groups remain on the side of the Myanmar army. The distrust towards politicians from the National League for Democracy, an important part of the shadow government, is a major challenge for the pro-democracy movement to overcome.

Nevertheless, the protesters remain confident. ‘We will soon give the generals a decisive blow,’ claims resistance fighter Aung Myat. ‘Their days are counted.’

Robert Bociaga is a writer, journalist and photographer specialising in International Affairs. He holds a Master’s Degree in Law, and has worked for CNN, German Press Agency (DPA), The Diplomat, Deutsche Welle, among others