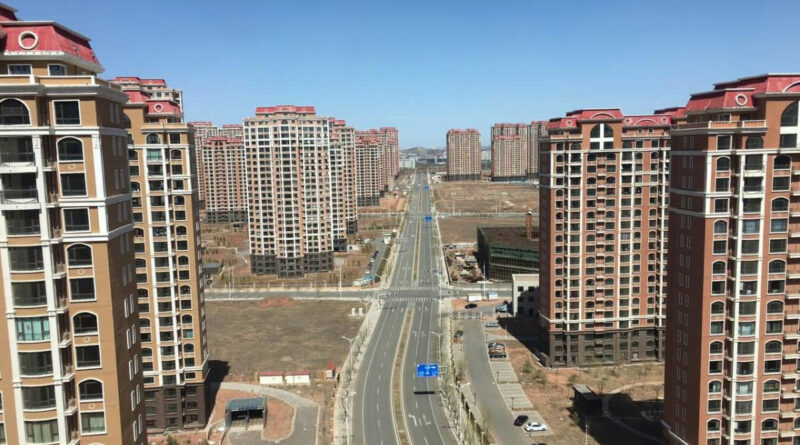 In the wake of a disappointing COP26 summit, Yvonne Gill assesses the environmental carnage caused by China’s rapid growth and exploitation of resources, and asks: who will rein in China?

COP26 coincided with a climate catastrophe in the making. The world is being ravaged by extreme weather conditions suchas droughts, floods, storms and wildfires; we face rising sea levels, pollution-induced diseases, and the extinction of species on land, rivers and oceans. Yet, at the climate summit held in Glasgow during the first two weeks of November,  a hapless global citizenry witnessed a grim spectre of compromises and juggling of 1.5 and 2 degree figures, as the datefor achieving the goal of carbon neutrality was pushed as far ahead as 2060.

Developed countries – whose industrial and technological revolutions were powered by coal and other fossil fuels– are historicallyresponsible for pumping CO2 and other greenhouse gasses into the atmosphere. But in today’s context, the biggest culprit is China, liable for nearly a third of global air pollution. Yet the comity of nations was unable to rise to the occasion and take direct action against China for its environmental crimes, which go far beyond air pollution.

US President Joe Biden took strong exception to Chinese President Xi Jinping’s absence from the Glasgow summitand his climate envoy John Kerry lashed out at the Chinese for their insincerity regarding taking measures to reduce emissions. But the Chinese managed a diplomatic coup of sorts by signing a ‘joint statement’at the summit with arch-rival the US, the world’s second largest polluter, with the pair tom-tomming their commitment to carbon neutrality. What a climb-down by the Biden administration, which had hitherto been whiplashing a belligerent China on different counts.

Then followed a compromise COP26 declaration, which broadly agreed to‘phase down’ coal production and end subsidies on fossil fuels. It called on all countries to ‘accelerate their emissions cuts’ by submitting new national plans by 2022. In the face of stiff resistance from the US and the European Union, the text omitted any reference to setting up a finance facility to compensatefor the loss and damage climate change was causing in poor countries. Even the pledge to provide $100 billion annually to finance developing nations’ transition from fossil fuels torenewables, and to adapt to environment-friendly measures, remains a wishy-wishy promise, with no binding clauses, as has been the case previously.India alone, for instance, needs a whopping $1 trillion to fulfil its 2030 climate goals – $100 billion a year. Where will that money come from?

Another Glasgow statement pontificated about ‘transformative action’ for ‘sustainable production and consumption; infrastructure development; trade; finance and investment; and support for smallholders, Indigenous Peoples, and local communities, who depend on forests for their livelihoods and have a key role in their stewardship’. Again, a string of empty words.

The ubiquitous environmental activist Greta Thunberg dismissively summed up COP26 as ‘blah, blah, blah’. The richest one per cent of the global population account for more emissions than the poorest 50 per cent, according to Oxfam. India’s environment minister Bhupender Yadav squarely blamed ‘unsustainable lifestyles and wasteful consumption patterns’of rich countries for causing global warming, saying that developing countries were ‘entitled to the responsible use of fossil fuels’.

The world emits 1,600 tonnes of CO2 every second, 70 timesmore than the pre-industrial era of 1850-1900. This has led to an average global temperature rise of 1.2 degree Celsius. A two-degree increase could be disastrous – hence the talk about ensuring the temperature does not rise beyond 1.5 degrees Celsius by the end of this century.

The Chinese operate the largest distantwater fishing fleet in the world. It is estimated to be 1,600­ 3,400 ships in size, many so large that their weekly catch could be equal to what local ships might catch in a year

A holistic look at China will show that it is the worst environmental offender, ravaging the air, land and water. No other nation in history has ever systematically indulged in such reckless exploitation of Earth’s resources in such a short period of time. While the world went into recession and reduced emissions following the 2020 Covid-19 outbreak, China’s emissions increased by 75 m tons and are likely to be much higher this year as it is firing coal-powered plants that had been shut down earlier.Air pollution in China is so bad, its effects can be felt thousands of kilometres away on the west coast of America. The US Environmental Protection Agency estimates that up to 25 per cent of pollutants in Los Angeles skies can be traced to China during the worst season. Some environmentalists believe China could at times be responsible for a third of California’s air pollution.

Coal and coal mining is responsible for a significant part of China’s emissions. The country is the largest coal producer, aggregating 46.7 per cent of total global production. It is also the world’s largest coal importer, as a large part of its electric supply comes from thermal plants. China has been exporting old smoke-spewing thermal plants to third world countries like Pakistan that are a part of its Belt and Road Initiative (BRI). This amounts to exporting pollution.

Infrastructure construction and housing development kicked off in China at a pace unprecedented in human history. What the West achieved in 200 years, China did in 20 or 30 years. This was accompanied by massive deforestation, displacement of population,reckless extraction of minerals and huge imports of raw material, because China, propped up by the US and its allies moving their manufacturing units there, became the cheap-labour factory of the world. With all that came a colossal price that Mother Earth, and our future generations, will have to pay.

China has over 22,000 dams, including some of the world’s biggest, such as the Three Gorges Dam. These have submerged huge land masses. Dams are being built at a furious pace on the fragile the Tibetan Plateau, also known as the third pole, due to ancient deposits of permafrost under its glaciers, which trap large amounts of CO2 that will be released as temperatures rise due to construction activities there. Yet China’s one-party autocracy does not care a damn, as they are focussed on satisfying the insatiable demand for energy of Chinese industry and the country’ sever-burgeoning infrastructure projects. These Himalayan hydro-electric projects also aim to control the water flow of the umpteen rivers that originate in Tibet and are the lifeline of people living downstream in the West up to Afghanistan, as well as the South & South-East from India and Bangladesh to several South-East Asian countries.

Forests, alluvial soil, atmosphere and oceans are known as carbon sinks as they absorbCO2 from the air. Our forests absorb 2.6 megatons of carbon dioxide every year. China oversaw the wanton destruction of 5,000 km of forest every year. In the last 20 years or so, half the forests were lost to dams, infrastructure and housing projects, and mining. The timber was happily used to meet ever-growing demand.Over the last several years, however, reforestation was undertaken, covering half a million sq. km of land, and logging drastically reduced. Now the demand for timber is being met with imports from all over –Australia to Latin Americaand Africa. Global Witness, an environmental NGO, maintains Chinese banks and investors have put over $22 billion into companies involved in the timber trade. Rainforests in Congo and Cameroon in central Africa, the Amazon basin in South America and Indonesian islands are being torn down to feed Chinese demand, which in turn supplies cheap furniture to the world.

Beyond its maritime boundaries, anywhere between 200,000 and 800,000 Chinese fishing boats scour the seas, indulging in illegal fishing, perilously depleting fish stocks. This overfishing is undermining the marine ecological balance. Many species are disappearing from regions they have naturally inhabited. The Chinese also operate the largest distant-water fishing fleet in the world. It is estimated to be 1,600-3,400 ships in size, many so large that their weekly catch could be equal to what local ships might catch in a year.US officials allege that China is one of the world’s worst perpetrators of illegal, unreported and unregulated fishing, disregarding fisheries management measures.The Chinese-flagged distant-water fishing vessels blatantly operate in the exclusive economic zones (EEZ) of other countries in almost every region of the world.

Chinese naval expansion is a part of their geopolitical strategy to hold sway in the Indo-Pacific. Of around 84.4m tonnes of fish caught in seas across the world in 2018, the Indian and Pacific oceans accounted for some 61.4m tonnes. US Coast Guard officials say the Chinese fishing vessels are a bigger menace than pirates these days.

In addition, low-cost, dirty extraction methods have given China a near-monopoly over the rare-earth metals market.China produced 120, 000 metric tonnes of rare earths, more than 90 per cent of the global production in 2018. These metals have a wide variety of applications, ranging from magnets, lasers, GPS satellites, photoluminescence, computer components, lighting and electronics.

Rare-earth mining is notorious for the environmental hazards posed by the toxic chemicals used. Cleaning up the environment costs a lot of money. Again, the Chinese are shifting the onus onto poor countries. They have obtained exclusive mining rights in Congo and Kenya, promising to finance infrastructure projects under BRI. Use of child and ‘slave’ labour at these mines has been reported, besides environmental damage and pollution of ground water and other water sources.

Unlike market-driven growth, China’s state-financed rapid development has generated massive wasteful and uneconomic assets. Ghost cities, where there are no takers for hundreds of thousands of apartments, are anepitaph to China’s centrally-planned growth. Another instance: China boasts of the world’s largest high-speed rail network, where trains consume three times more power than regular ones. As they need to be kept lightweight, the high-speed trains cannot carry freight; and because there aren’t enough passengers on low-density routes, the high-speed train fares have been cross-subsidised by jacking up railway freight charges. The gigantic 37,900 km high-speed rail network has piled up losses to the tune of $900 billion. Increased railway freight tariffs have forced companies to shift to road transport, which spews pollutants, adding to the China’s enormous carbon load.

Let’s remember, nature has no borders. Pollution in one country affects the global environment. So if we crack down on the worst offender while bringing others into line, our planet will indeed be a better place to live. But who will bell the Big Cat?