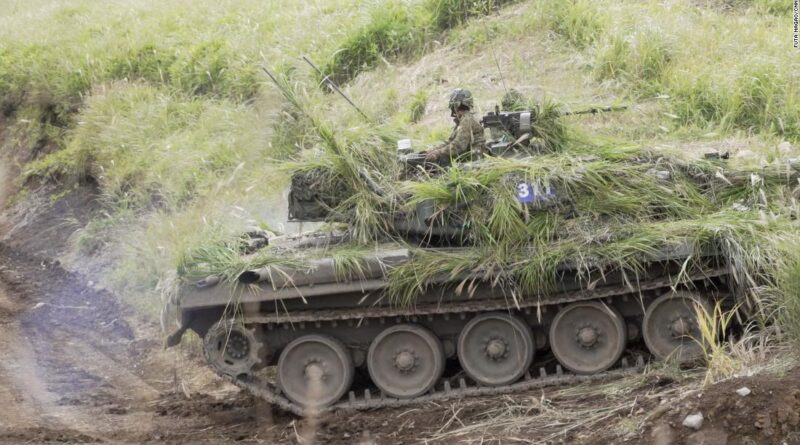 As tensions rise with China in the Indo-Pacific, Quad member Japan conducts its first military drills in three decades to prepare for any potential conflict. Amit Agnihotri reports

In a first since 1993, Japan – a pacifist nation since World War II – carried out massive military exercises between September and November to prepare for a potential conflict that could result from China’s growing aggression in the Indo-Pacific region.

Japan is a member of the four-nation, US-led Quadrilateral Security Dialogue, which also includes India and Australia. The grouping, popularly known as the Quad, is widely believed to be an anti-China formation. Its members have vowed to ensure a ‘free and open’ Indo-Pacific, one of the world’s most important shipping lanes, which has become a focal point of tension over the past years.

Tokyo carried out the military drills as it is concerned over Beijing’s unilateral attempts to change the status quo in the region by use of force and feels that such aggression is a common concern, not only in Asia but across the world.

Over the past years, China, which claims most of the disputed South China Sea as well as the Japan-held Senkaku islands in the East China Sea, has downplayed its growing maritime activities, saying that Beijing has the right to defend its sovereignty, security and development interests.

Now, in a first, Chinese and Russian warships have recently patrolled the Pacific Ocean, raising further concerns in Tokyo.

Japan is also worried that China has been threatening Taiwan by flying fighter jets into its air defence zone, while North Korea is deliberately challenging the international nuclear non-proliferation order.

Not only is North Korea amassing a large stockpile of missiles that can hit Japan, Pyongyang recently test-fired a new ballistic missile from a submarine that landed in the Sea of Japan, forcing a review of Tokyo’s missile defence programme.

Against this backdrop, the Japanese Ground Self-Defense Force (GSDF) conducted the military exercises in which around 100,000 personnel, 20,000 vehicles and 120 aircraft participated to develop operational readiness, deterrence and response capabilities.

Set up in 1954, the last time the GSDF conducted similar exercises was in 1993. As the force has never faced an actual conflict, the recent military exercises were designed to give the troops a war-like feel through simulated games.

The location of the military drills, the Hijudai Manoeuvring Area in Oita prefecture, was chosen carefully as the terrain is similar to the southern islands, including the uninhabited Senkaku islands, which are under Japanese control but are claimed by China.

The Senkaku islands chain is around 1,900 km from Tokyo but only 600 km away from Shanghai in China. The islands have been a bone of contention between Japan and China for over a century.

Military exercises were also conducted on Miyako Island, Amami Oshima and the Yonaguni Island, which is just 234 km from Taiwan.

These combat drills were part of a plan that includes efforts to double Japan’s defence expenditure, from the mandated 1 percent of GDP to around 2 percent, strengthening security alliance with the US and deepening military cooperation with European countries such as the UK, France, Germany and the Netherlands.

Navies of the US, France, Japan and Australia conducted their joint training exercise in the Indo-Pacific region in May. Later, the UK and Germany sent their aircraft carriers to the Indo-Pacific, indicating a growing concern among EU and other European nations about securing the region.

In November, German navy frigate Bayern, the country’s first military vessel, made a port of call in Japan – the first in about two decades – and conducted joint exercises with Japan’s Maritime Self-Defence Force in the Pacific Ocean. The frigate had earlier conducted training with MSDF in the Gulf of Aden in August, and would also visit South Korea and sail through the South China Sea, where China is building up military outposts.

Significantly, Bayern conducted a mission for the first time to monitor whether North Korea was carrying out ship-to-ship transfer of goods in violation of the United Nations Security Council sanctions against Pyongyang’s nuclear and missile development programme.

Germany has been stepping up its engagement in the Indo-Pacific after Berlin released its comprehensive guidelines for the region in September, 2020, marking a shift in the country’s Asia policy.

For its part, Japan has been ramping up its land, air and sea warfare capabilities while working towards integration of the three defence services.

Tokyo is upgrading the Maritime Self-Defence Force’s two Izumo-class helicopter carriers into full-fledged aircraft carriers. The ships are being readied to support the landing and take-off of US-made advanced F-35B stealth fighter jets.

Japan plans to procure 42 such high-tech fighter jets, with the first scheduled to enter service by 2024. Through this acquisition, Tokyo aims to counter China’s growing assertiveness in the region and improve interoperability with the US military, which is already operating the advanced jets from one of its bases in the country.

Tokyo wants surveillance drones, indigenous stealth fighter jets, and missiles with a striking range of over 1,000 km to boost its military power. The country is also building up capabilities in cyber, space and electromagnetic warfare.

Credit for pushing up Japan’s military spending goes to former prime minister Shinzo Abe, who floated the concept of a ‘free and open Indo-Pacific’ in 2016.

Abe’s policies have been carried forward by his successors, Yoshihide Suga and incumbent Fumio Kishida, who reviewed the country’s security strategy in the National Security Council meeting held in September after eight years.

However, the plan to boost defence expenditure has faced some resistance at home.

While a section of the public view is that the 1 percent of GDP cap kept the country away from militarism, which had led it to World War II, the others want the government to spend more on social welfare and reviving the pandemic-hit economy.