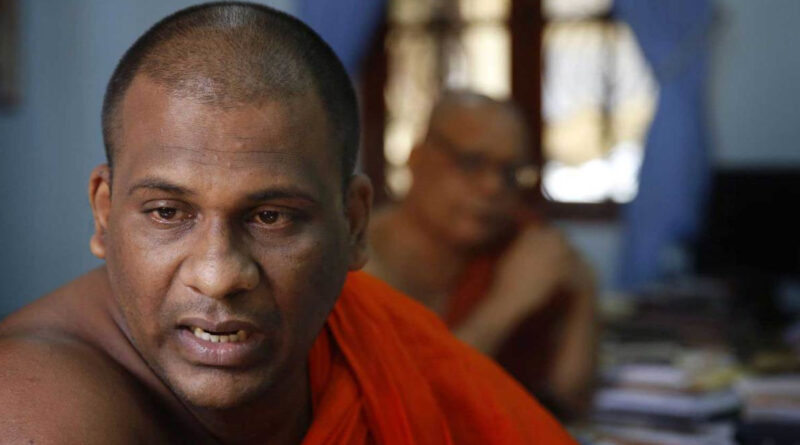 Instead of a month of celebrations for Sri Lanka’s first family, November proved another disastrous milestone of their own making, writes Neville de Silva

November was a special month for the Rajapaksas, Sri Lanka’s ruling family. November 18 marked Gotabaya Rajapaksa’s second anniversary as the country’s president. It was also Prime Minister Mahinda Rajapaksa’s 76th birthday. Six days earlier Basil Rajapaksa, elevated to the rank of finance minister in July in the hope of retrieving the country from the economic morass in which it finds itself, presented his maiden budget as the fifth Rajapaksa in the Sri Lanka cabinet.

While this Rajapaksa cabinet collective constitutes a record in the country’s post-independence history, it was hardly an occasion for celebration. It certainly was not for Sri Lanka’s hungry and disillusioned people, who have taken to the streets in protest over multiple issues, despite the government deploying police in strength – and at times the army – to stop busloads from travelling from distant provinces to Colombo.

Even the local Aladdin’s magic rub failed to bestir domestic or international enthusiasm in Basil Rajapaksa’s self-proclaimed ‘futuristic and people-centric’ budget. Economists argued that he had failed to provide a way out of the severe foreign reserves crisis, mounting foreign debt servicing and depleted government revenues to meet ambitious spending proposals.

In 2019, ten years after his central role in the military defeat of the minority Tamil secessionists, some 6.9 million, mainly majority Sinhala Buddhists, voted this decorated former military officer to power as the new messiah. The then governing coalition, more divided than Gaul in Caesar’s time, eventually perished ignominiously.

Today that golden dream has turned to dross. Even the peasant farmers who have formed the Rajapaksas’ support base from the days of their father and uncle – both highly respected politicians – have left their rice fields to take to the streets.

Disillusionment is turning to outspoken antagonism as election promises are ditched

Across Sri Lankan society (except for government politicians and their sycophantic followers), people have become disgruntled with this dysfunctional government. They see it being increasingly run by presidential Task Forces headed by former or serving men in uniform, instead of by the parliamentary democratic system with its transparent institutions.

Now disillusionment is turning to outspoken antagonism as pre-presidential election promises, spelled out in campaign pledges and manifestos, are being ditched by the wayside, just as the import of chemical fertilisers and pesticides, used by rice and vegetable farmers and on tea, rubber and coconut plantations, which still contribute substantially to Sri Lanka’s export earnings, are suddenly being cast aside.

Today there are at least a dozen ‘Task Forces’, the latest being the one named ‘One country, one law’. Such messianic clichés would have some popular traction if they were believable. But public experience is to the contrary. Laws that should be universally applied, irrespective of ethnicity, religion, political beliefs and social activism, have proved to be illusory.

Even more galling is the composition of this recently appointed Task Force (TF), which has aroused the ire of wide sections of the Sri Lankan community and serious concerns amongst international human rights bodies.

President Gotabaya appointed a discredited Buddhist monk – widely known for his hate speech against minority communities, especially the Muslims, and a penchant for verbal and physical violence – to head the Force. He is a convicted felon, sentenced to six years’ imprisonment for contempt, for threatening lawyers and the judge in open court, and hurling abuse at a woman litigant whose journalist husband had ‘disappeared’ while in the hands of the military.

This rabid monk, Galagoda Aththe Gnanasara thera, was pardoned by then President Maithripala Sirisena shortly before the end of his presidential term. Not only was this monk made chairman of the TF; President Gotabaya failed to nominate a single member of the Tamil community, the country’s main minority, or a woman representative to the body, which should have been more appropriately named Task Farce.

Having heard of the appointment, Justice Minister Mohamad Ali Sabry, a Muslim and one-time personal lawyer to Gotabaya Rajapaksa, threatened to quit the government and the governing party.

The president then did what this government does frequently when guilty of policy faux pas:retreat like an army under siege, revoking gazette announcements or amending them to present a more acceptable face.

The Gotabaya Rajapaksa regime, surrounded by over-rated policy advisers, resorts to the Leninist strategy of ‘one step forward and two steps back’ to mitigate the wrath of the people, as I pointed out a couple of months back.

In late November there was more confusion over whether the government had once again changed its policy on the use of chemical weedicides when an earlier ban was revoked. It took only a few days for that gazette notice revoking the ban itself to be revoked, making last April’s foolish decision to immediately ban all chemical fertilisers sound even more ludicrous, scientifically.

As native American Indians once sent up smoke signals to communicate their intentions or pass on information, there are signals coming from different parts of the country that times are not propitious for a government.

At the time of writing, some 15 trade unions in the health sector are on a two-day strike that will affect the public health service and the entire hospital system, except where Covid patients are being treated.

On November 27 an association of government employees’ trade unions, with membership supposedly numbering up to one million, are due to launch a strike that could cripple work in state offices and enterprises island-wide.

The government is bound to do what it did to the massive protest organised by the main opposition party Samagi Jana Balawegaya (SJB- United People’s Power) in mid-November, with police seeking injunctions from some 80 magistrates’ courts in the country to prohibit public gatherings as a violation of health regulations imposed to contain Covid.

With some Colombo and suburban courts refusing the police request as a violation of constitutional rights, thousands gathered in the capital. Other demonstrators stopped by police barricades squatted on the roads and wayside in a display of anger.

But it is not just the rising public protests that should worry the government as it approaches the new year. In January it has a bond payment of $500 million. There is a $1billion debt maturing in July. Debt servicing obligations and other commitments next year are estimated to amount to $5 billion, though some believe it could amount to $7 billion. Sri Lanka’s foreign reserves in mid-November were said to be a mere $1.6 billion, down from $2.3 billion a few weeks earlier.

With little money to import medicines, fuel and food and some predicting a severe food shortage following a muddled agriculture policy, real trouble lies ahead. As I write, the finance minister is due to fly to New Delhi to try and convince Prime Minister Narendra Modi to bail Sri Lanka out. If India does help, it could come at a cost. The bill for its pound of flesh would arrive later if, in a constitution now in the making, Sri Lanka fails to provide equal rights for its Tamil community.