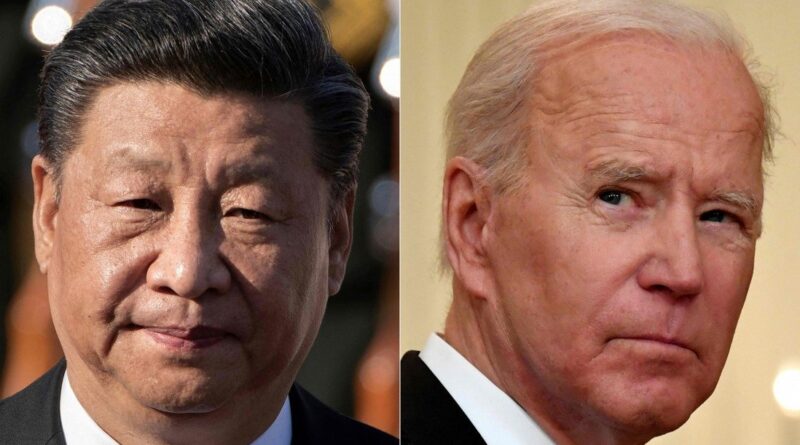 Despite warm greetings between Xi Jinping and Joe Biden during a November video call, Xi’s strong communist line and the cool tone of much of their exchange suggest they are far from a rapprochement. Duncan Bartlett reports

The relationship between the United States and China has not improved significantly since Joe Biden replaced Donald Trump as president.

It would have been a forlorn hope, therefore, to expect one video call to resolve the crisis. Nevertheless, the fact that the three-hour conversation between Joe Biden and Xi Jinping took place at all could be regarded as a modest breakthrough.

The General Secretary of China’s Communist Party spoke from deep within the walls of a palace on the western side of Tiananmen Square in Beijing, a venue which looked every bit as sumptuous as the throne rooms of China’s great emperors of the past.

‘I noticed that Mr Xi and his supporters looked extremely self-confident and assured as they sat in a grandly furnished, brightly-lit and spacious chamber of the Great Hall of the People,’ observes Dr Olivia Cheung, a specialist in the political thought of Xi Jinping at the SOAS China Institute, University of London.

She says the Chinese venue overshadowed the Roosevelt Room of the White House, which Mr Biden used for his side of the conversation.

The presidents discussed the need for nuclear ‘strategic stability’ talks. The hope is that the negotiations could slow down an arms race, in which China is seeking to rapidly expand its nuclear arsenal.

The meeting did bring up moments of accord, such as when Xi Jinping asserted, ‘I stand ready with you, Mr President, to build consensus, take active steps and move China-US relations forward in a positive direction’, and President Biden agreed to cooperate ‘where our interests intersect’.

However, the overall tone was guarded, which was reflected in the language used by both sides.

‘Our responsibility as leaders is to ensure that the competition between our countries does not enter into conflict – whether intended or unintended,’ said Mr Biden. He used a new diplomatic term as a metaphor, saying that security ‘guardrails’ are required to prevent danger.

The metaphor from the Chinese side, says Dr Cheung, focused more on asserting status. ‘Xi Jinping described China and the US as two giant ships sailing in the ocean, as the two largest economies in the world and as permanent members of the UN security council. It was all designed to give the impression that China really is equal to the United States.’

The implication is that if China is powerful enough to deserve respect, America has little choice but to accept its autocratic government, in order to avoid hostility.

In a briefing to reporters, the US national security advisor, Jake Sullivan, who sat in on the call, said that Mr Biden had challenged Mr Xi over human rights, unfair trade practices and China’s intimidation of Taiwan.

Just a day before the summit, China’s navy conducted a series of high-intensity bombing drills near the southern island province of Hainan, which could be seen as a practice for an attack on Taiwan.

Nevertheless, President Biden said the United States is adhering to the ‘One China’ policy, which still recognises Beijing as the sole seat of government in China. In return, Mr Xi warned that anyone who supports Taiwanese independence is ‘playing with fire’ and would ‘burn themselves’.

Mr Xi may have felt able to brush away American complaints because he had recently been supported by the Communist party in his plan to hold onto power.A resolution passed at a plenum called by the Politburo before the summit hailed Mr Xi as the leader who will go down in history as the man who has made China strong.

‘China wants the United States to recognise and praise its achievements,’ says Dr Cheung. ‘They want the Americans to see that a one-party system is as good as, if not superior, to a liberal democratic form of government.’

The Chinese state media presents its system of governance – known as ‘Socialism with Chinese characteristics’ – as democracy.

‘The significance is that if there are elements of the rules-based international order which are incompatible with China’s political system, then it should be absolutely legitimate for China to decide to not go along with that,’ adds Dr Cheung.

‘For example, the rules-based international order promotes a notion of human rights as something inalienable to every individual. However, China’s one-party political system subordinates human rights to an absolute notion of state sovereignty and regime security. Therefore, any criticism of China’s human rights performance in, say, Xinjiang or Hong Kong, is out of the question. Criticism would be seen as not respecting China’s political system and hence not respecting China.’

Despite the wary tone of the Xi-Biden summit call, an agreement was reached, which, if honoured, will be significant for Asia and the world.

National security advisor Jake Sullivan said the presidents discussed the need for nuclear ‘strategic stability’ talks. The hope is that the negotiations could slow down an arms race, in which China is seeking to rapidly expand its nuclear arsenal. The Pentagon predicts China will have a thousand nuclear warheads by the end of the decade.

But Dr Cheung has limited optimism about the outcome of the negotiations, should they indeed happen.

‘I do think it is encouraging that the Xi-Biden meeting could lead to more exchanges between China and the United States on arms control. But I think the content of those discussions would mainly be focused on conflict management, rather than restricting China’s military ambitions. Xi Jinping has made it quite clear that building China’s army, the People’s Liberation Army, into a world-class military is part of his package of national rejuvenation. The Chinese will not offer any concessions which could undermine the power of the PLA,’ she says.

If that desire to empower China’s armed forces remains Mr Xi’s policy priority, it suggests that the arms control programme is likely to have little impact, even before a date is agreed for the start of the talks.

Duncan Bartlett is the Editor of Asian Affairs and a Research Associate at the SOAS China Institute, University of London. He is currently teaching diplomacy and international relations for the Economist Executive Education course, ‘A New Global Order’