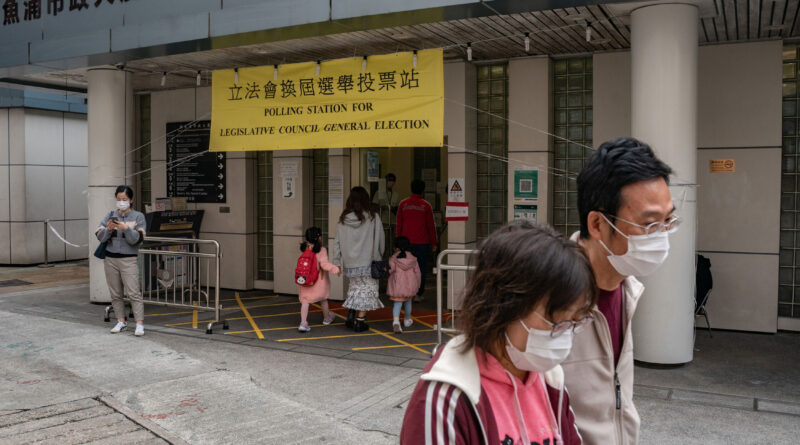 Even amidst a rigged election and draconian measures against opposition, Stephen Vines sees a flame of defiance burning brightly among the people of Hong Kong

Street demonstrations and all other forms of open support for the democracy movement have largely disappeared from sight in Hong Kong but, as the election held on 19 December made clear, the spirit of resistance to the new order is still alive and well.

Despite threats of jail, even to a pollster who correctly predicted the extent of the boycott, and a somewhat farcical attempt to drum up enthusiasm for election day by offering free public transportation, a clear majority of the electorate decided to register a protest against this rigged poll.

In a contest where voters were only offered a choice of candidates acceptable to the acolytes of the Chinese Communist Party, a mere 30 per cent turned out to vote. This compares with an impressive 71 per cent turnout in 2019, the last time any form of democratic election was held and the democrats swept the board.

Since then nearly all elected councillors have been put in jail, forced out of office or are under some form of investigation. The pro-government candidates who were roundly rejected by the electorate in 2019 have been offered all manner of semi-official or official posts and many of them were recycled to take part in this year’s legislative council election which restricted participation to so-called ‘patriots’, plus a few harmless critics who survived a heavy vetting process.

Yet the pretence of democracy is avidly maintained, albeit in an Orwellian fashion where bare-faced lies have become the order of the day. These distortions are so rife it is hard to settle on just one example, but Xia Baolong, the head of China’s Hong Kong and Macau Affairs Office, managed to excel. Speaking before the election, he said that all candidates,‘whatever ideas, political stances, religions or demands people hold… will have the opportunity to partake’.

The reality was that any candidate suspected of harbouring pro-democracy views was summarily dismissed from the election process and those who managed to secure seats will only be tolerated as long as they act as rubber stamps in the new enlarged legislature.

Inadvertently, a more accurate picture of the new politics was provided by Hong Kong’s leader Carrie Lam, who said that the ‘improved’ system provided a break from a previous ‘blind pursuit’ of western-style democracy. Eagerly echoing the narrative from Beijing which portrays China’s system of government as being both morally superior and more effective than that of democratic nations, Lam added: ‘What’s the point of having so-called democracy if people are suffering, as you can see in some western democracies in the course of fighting Covid-19?’

A Stasi-style informers’ hotline is said to have received over 200,000 tipoffs regarding breaches of the National Security Law

China’s promise of setting Hong Kong on the road to universal suffrage has now been tossed aside, along with all the other promises of freedom of speech, freedom of assembly and indeed the preservation of an independent judiciary, which has provided the foundations for Hong Kong’s prosperity.

In less than a year following the enactment of the draconian National Security Law, the crackdown on liberty has been rolled out with astonishing speed. In addition to the 10,500 people arrested as a consequence of the democracy protests in 2019/20, the NSL has swept up some 150 suspects who can expect very long prison sentences for newly embellished offences such as subversion of state power, collusion with foreign powers, and terrorism. In other words, a litany of crimes commonplace in all authoritarian societies where guilt is established at the point of arrest and merely confirmed in a court of law. Moreover, the hand-picking of judges for national security cases and the absence of juries has brought the judicial system close to the point of precarious credibility.

The reality of today’s Hong Kong consists of the early morning knock on the door by bevvies of armed policemen for anyone who dares to challenge the system. A Stasi-style informers’ hotline is said to have received over 200,000 tipoffsregardingbreaches of the National Security Law. The police force has been politicised to an unprecedented degree and is regularly deployed in large numbers to thwart any form of protest. Some 10,000 officers presided over the December election, a deployment unprecedented in the days when some semblance of free and fair elections were tolerated.

Apple Daily, the last surviving democracy supporting mass circulation newspaper, has been forced to close, with its founder Jimmy Lai almost certainly destined to spend the rest of his life in jail, alongside other executives and journalists from the company. Elsewhere on the media front, the public broadcaster RTHK has been purged and purged again to remove even archive material from its website, because the freewheeling days of public broadcasting are now regarded as embarrassing. Many staff have been forced to leave or simply walked out in despair.

A clampdown in the education sector reflects an almost obsessive official view that the high levels of youth participation in the 2019/20 uprising stemmed from the malign influence of foreign-inspired ideas of democracy which corrupted students’ minds. Patriotic education, flag-raising ceremonies and new textbooks have been introduced to change all this and to make sure that only ‘reliable’ members of the teaching profession can expect promotion, while others are rushing for the exit door.

The net result is that, at the least for the time being, restive Hong Kong has been brought firmly under the Communist Party’s control. Party leaders and their cyphers in Hong Kong can barely contain their glee and solemnly proclaim that they have perfected the system of ‘one country two systems’ devised by Deng Xiaoping to create an enclave with considerable autonomy within the borders of China.

The claim is shallow yet the Communist Party seriously believes that Hong Kong can continue to function as a global business centre without the trappings of judicial independence, free flow of information and accountability – in other words, the core requirements for an international centre.

The Party’s leadership bases its confidence on its experience of cajoling even the largest multinational companies into tame acceptance of the new order in Hong Kong, and comes from dealing with corporations which have proved their willingness to go that extra mile in order to do business on the Mainland.

They have noted that multinationals have been prepared to accept Communist Party branches in their Chinese operations. In Hong Kong, they saw how easily it was to strongarm some of the biggest banks into offering support for the National Security Law.

And they were pleased to see Mark Zuckerberg, Facebook’s boss, offering the option of ‘Facebook-lite’ to get his company into China, and sniggered when the offer was accompanied by his faltering attempts to address his interlocutors in Mandarin as they slammed the door in his face.

But the tide is turning as both overseas governments and companies reassess their relations with Beijing and begin to wonder whether Hong Kong is different from any other Chinese city.

The hard men in Beijing are convinced that they can reverse gravity by imposing total control over Hong Kong, shearing away the core elements that made it an international centre while carrying on with business as usual.