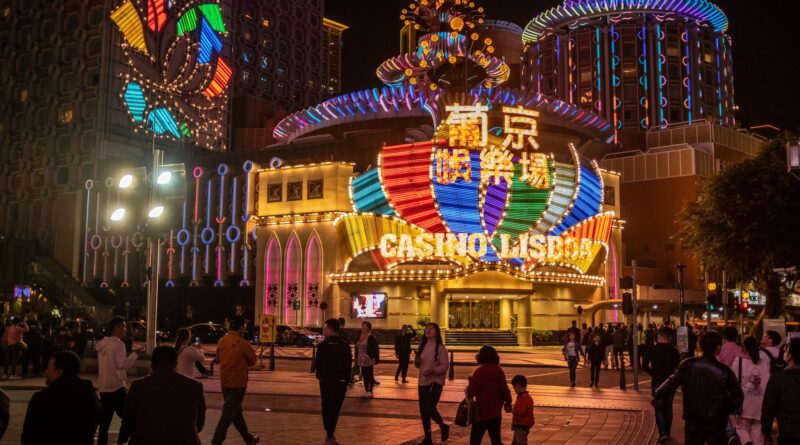 The Chinese authorities are clamping down on casino gambling in Macau, with police arresting one of the most influential players. Martin Purbrick examines the international influence of Macau’s casinos and their shady links with organised crime

Macau is the only territory in the People’s Republic of China where casino gambling is legal. Casino operators often reach out to people from the mainland and lure them to the city with offers of luxury travel and accommodation. These packages are known as junkets and are ultimately funded by the profits of the huge gaudy casinos, packed with slot machines and table games which are popular with Chinese gamblers. Public records suggest that Macau casino revenue is around six times the amount taken by casinos in Las Vegas.

This region of Asia is familiar to me through my many years of working to combat illegal betting and related financial crime in Hong Kong – a short boat ride away from the city of Macau, which is a Special Administrative region of China. In the 1990s, I worked as an officer in the Royal Hong Kong Police Criminal Intelligence Bureau, collaborating with the Portuguese police officers seconded to Macau who tried to maintain order.

At that time, triad societies in the city were engaged in violent conflict that led to dozens of murders and assaults. The gangs sought control of both the lucrative casino VIP rooms and the prostitutes who offered sex to male players.

One of the most notorious gangsters was Wan Kuo Kui, known as ‘Broken Tooth Wai’. He was the former leader of the Macau branch of the 14K triad.

Wan was arrested after an assassination attempt on the last director of the Macau Judiciary Police under Portuguese administration, Antonio Baptista, who found a bomb under his car. The attempt failed and Wan was sentenced to 15 years in prison in 1999. He is now out of jail and reported to be involved in trading cryptocurrency and security services relating to Chinese ‘Belt and Road’ projects.

To those of us investigating organised crime in the region, it has been clear for some time that the junket operators have been engaged in illegal business, so it is not surprising that the authorities in China have at last decided to enforce their laws. Junket operators try to disguise illicit funds as legitimate casino winnings.

When the Chinese Communist Party took power in 1949, it tried to outlaw all gambling

In November 2021, police in Macau arrested Alvin Chau Cheok-wa, the chairman and controlling shareholder of Suncity Gaming Promotion Company, on charges relating to money laundering. Many people in Macau and Hong Kong believe that this arrest signals the end of the glory days of Macau`s gambling. It has certainly led to a huge sell-off of shares in gambling companies, costing investors many billions of dollars.

Suncity has been under scrutiny since 2019, when a Chinese state-owned news agency denounced the company for facilitating online gambling, which is not legally allowed either in Macau, nor in mainland China. The official line is that online betting causes ‘great harm to China’s social-economic order’.

In fact, when the Chinese Communist Party took power in 1949, it tried to outlaw all gambling. Almost immediately, though, people found ways around the laws and betting has continued amongst Chinese people, both on a legal and illegal basis.

Legal lotteries are an important source of government revenue. People in the PRC are able to gamble on both the Welfare Lottery and the Sports Lottery, which are operated by agencies administered by the government. More than US$60 billion worth of tickets were sold last year.

In Macau, the gambling culture goes back hundreds of years. In 1810, the city introduced a charitable lottery and in 1846 the government legalised fan tan– a game involving bets placed on counters hidden under a bowl.

In 1930, the government launched a monopoly system for gambling houses and by 1961 the governor declared that Macau was a ‘permanent gambling region’. This led to a public tender for the monopoly casino operating licence, which was won by Stanley Ho and his Sociedade de Turismo e Diversões de Macau (STDM) company. Ho operated eight casinos in Macau, as well as a horseracing track, greyhound racing and the only ferry service between Hong Kong and Macau. This monopoly made Stanley Ho and his associates astoundingly rich.

The monopoly of STDM on the casinos of Macau ended in 2002, and since then many international operators have moved in, especially from America, including Galaxy Entertainment Group, Wynn Resorts and MGM, which is run in partnership with Pansy Ho, daughter of the late Stanley Ho.

Sheldon Adelson, the founder of another big casino operator, Las Vegas Sands, was a major donor in support of Israel, the Republican Party in the US and Donald Trump. Sheldon died in January 2021, leaving a massive fortune to his widow, Miriam. She is said to remain an influential player within the Republican party, which over the past decade has received more than half a billion dollars of the family’s fortune. The PRC leaders in their Zhongnanhai compound in Beijing cannot have failed to notice that a significant slice of the revenue from Macau casinos taken from Chinese customers is supporting the party of President Trump.

Despite the inevitable disruption linked to the arrest of Alvin Chau Cheok-wa from Suncity, the future for Macau looks brighter than recent news reports may suggest.

Macau has an established infrastructure of huge casino-hotels that cater for Chinese tourists, who, as they grow richer, gamble more money on the slots and at the tables. Even if the casino operators in Macau lose out on some of the huge profits brought in by VIP gamblers lured in by junkets, they can still reap substantial revenues from the masses of Chinese tourists.

Centuries ago, Chinese rulers tried to restrict gambling to a privileged elite and betting was regarded as a noble pastime for the wealthy classes. However, it wasn’t long before common people also wanted to try to win money and often ended up losing their bets. Many Chinese emperors have passed harsh laws against gambling, whilst indulging in the habit themselves. Whatever the official position, for the VIPs, there always seems to be a table available somewhere in China.

Martin Purbrick is a writer, analyst and consultant with a background in law enforcement and financial crime risk management in Asia for more than 30 years