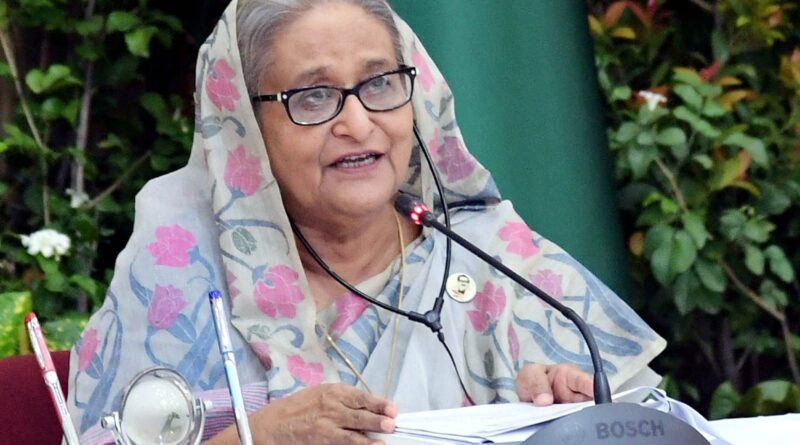 As Bangladesh passes its 50th birthday and the ISI continues to wield influence there,   Richard Gregson insists that Pakistan should pay for wartime atrocities it committed in the country

The humiliating surrender by 93,000 soldiers of the Pakistan Armed Forces to Lieutenant General Jagjit Singh Aurora, Joint Commander of Indian and Bangladeshi Forces at Decca (now Dhaka), the capital of East Pakistan, has left an ugly scar on Pakistan’s national psyche. The bitter memory of Lt. Gen. A. A. K. Niazi, then Martial Law Administrator of East Pakistan, signing the instrument of surrender on 16 December 1971still rankles among a whole generation of Pakistanis. The country’s all-powerful military establishment and the ruling elite, in particular, have never been able to reconcile with the emergence of a secular Bangladesh – a historic repudiation of the concept of nationhood based on religion that led to the partition of India and the creation of Pakistan in 1947. It took merely 24 years for Pakistan to split into two separate entities.

Bangladesh was still in a celebratory mood when the Pakistan Army’s Inter-Service Intelligence (ISI), infamous for its subversive activities through its jihad proxies in India, started putting in place insidious strategies to destabilise Sheikh Mujibur Rahman’s government. Although India maintained a hands-off attitude regarding the internal affairs of Bangladesh, Indian agencies had repeatedly warned the new regime that the Pakistanis were clandestinely hobnobbing with fundamentalist elements in the armed forces, as well as diehard bigots among politicians, who had started fomenting political instability in those early years of the nascent nation.

In December 1974, the late Indian Prime Minister Indira Gandhi had sent Research and Analysis Wing (RAW) chief R.N. Kaw to Dhaka. The Indian intelligence agency’s top man was assigned to personally brief Sheikh Mujibur Rahman with details of an assassination plot being hatched by a section of the army in cohort with the Pakistanis. Bangabandhu, or Friend of Bengal, as he was popularly known, reportedly laughed it away, saying, ‘These are my own children and they will not harm me.’ The warnings were repeated through different channels by India, but Rahman remained unfazed.

And on August 15, 1975, a dozen renegade mid-rank officers of the Bangladesh army assassinated the founder of Bangladesh and 18 of his family at his ancestral home. The leader had refused to move to a safer residence despite being repeatedly advised by security experts.

Journalist Lawrence Lifschultz, Dhaka correspondent for the Far Eastern Economic Review in 1974, writes in his book Bangladesh: The Unfinished Revolution, that the ‘CIA station chief in Dhaka, Philip Cherry’, was aware of the conspiracy and ‘embassy officials were in touch with the Awami Leader, Khandaker Moshtaque Ahmad, and a section of army officials’ involved in the bloody coup. Pakistan was a close ally of America and a part CENTO in those days. The US had also threatened to send its 7th Fleet to intervene in the Bangladesh liberation war after Indian forces entered Bangladesh. The Indian military action came after Pakistan carried out a series of air raids on Indian Air Force bases and radar stations in Punjab, Jammu and Kashmir, Haryana and Rajasthan. India did train and arm Bangladesh’s Mukti Bahini, leading the insurrection against the rampaging Pakistani forces committing genocide in East Pakistan.

The conspiracy to murder Bangabandhu was hatched at the Dhaka cantonment by Khandaker Abdur Rashid (a close relative of Khandaker Moshtaque), Farookh Rahman and Shariful Hoque Dalim, who had defected from the Pakistani army towards the end of the liberation struggle. Moshtaque Ahmad was a Pakistani mole in Bangabandhu’s cabinet; so were the officers who had defected at the last moment.

No wonder, soon after the gruesome massacre of the first family, Ahmad moved in to take over the government, proclaiming himself as President. He sacked army chief K. M. Shafiullah and appointed Maj. Gen. Ziaur Rahman as Chief of Army Staff of the Bangladesh Army.  The new President, who never wanted an independent Bangladesh and had favoured resolution of the issues ‘peacefully with Pakistan’, pushed Bangladesh onto a regressive course, undermining Sheikh Mujibur Rahman’s secular-democratic ideals.

Describing the killers of the founder of Bangladesh as Shurjo Shontan (sons of the sun), he ordered the imprisonment of prominent Awami League leaders. The nation’s salutation of Joy Bangla was changed to Urdu-accented Bangladesh Zindabad. Bangladesh Betar became Radio Bangladesh and pro-Pakistani elements began to raise their head again. Then followed a series of coups during which Mushtaque Ahmad found himself in jail. Bangladesh remained under Pakistan-style military rule for 15 years.

The HUJI-B, an offshoot of the Pakistani jihadi group Harakat ul-Jihadi-Islami (HUJI), wants an Islamic state in Bangladesh

When Sheikh Hasina came to power in 1996, she re-opened the Mujibur Rahman assassination files and got Parliament to repeal the unconstitutional Indemnity Ordinance of 1975, a martial law fiat issued by Khondakar Mushtaque Ahmed to protect the conspirators. The assassins were tried by the court for conspiracy and murder and given death sentences. One of the convicts had died by the time the Appellate Division upheld the sentence in 2009. Six of the killers have been executed, while five of the fugitives live in the US, Canada, Libya and Pakistan. Attempts to extradite them have not succeeded so far. Gen. Ziaur Rahman, who, along with Mushtaque Ahmad, was the mastermind of the 1975 bloody coup, was killed in a military coup in 1981. Ahmad died before the trial began.

Pakistan’s ISI still continues to target its eastern sibling, sponsoring terror groups, working closely with Islamic fundamentalist leaders and even training terrorists at camps situated in Pakistan.  But the counter-current of secularism spear-headed by Sheikh Hasina, Mujibur Rehman’s daughter – the strong hatred for Pakistan whose armed forces committed the most heinous atrocities against Bangladeshi men and women in the years before liberation – has held the country together. Much to the envy of the Pakistanis, the country is on a growth trajectory of all-round progress.

In the four decades of her political career, Prime Minister Sheikh Hasina had survived 19 assassination attempts, a record of sorts. A 2004 grenade attack at her rally in front of the Awami League’s central office in Dhaka left 24 dead and more than 300 injured. In 2011, the ISI formed a ‘task force’ comprising overseas Pakistanis and absconding killers of Mujibur Rahman. It was assigned to hire an LTTE suicide squad to assassinate Hasina prior to the polls in Bangladesh in October that year. That plot was exposed by RAW and nipped in the bud. Another attempt to use women indoctrinated with radical Islam for the heinous crime was unearthed by Bangladesh’s security agencies in 2014.

Bangladeshi minister Hasan Ul-Inu says that the Holey Artisan Bakery bombing attack by Jamat-ul Mujahideen Bangladesh (JMB) in Dhaka, killing 20 people from five countries in 2016, was the handiwork of the ISI. Investigations have revealed the attackers had gone to Pakistan and then to Afghanistan to receive military training. Pakistan’s Lashkar-e-Taiba (LeT), a front for the ISI, trains misguided youth to use arms and provides financial support to the JMB and other local terror outfits.

The Aqa Mul Mujahideen (AMM) is a Pak-supported terror group active among Rohingya refugees, a large number of whom are camped in Cox’s Bazar’s Teknaf and other areas of Bangladesh. The AMM has links with the LeT and Jaish-e-Mohammed. Indian intelligence agencies have information about Rohingya terrorists’ involvement in subversive activities alongside local militants in Jammu & Kashmir. The AMM has been recruiting youths from the Rohingya refugee camps and sending them to Pakistan for arms training, according to Bangladeshi sources.

The HUJI-B, an offshoot of the Pakistani jihadi group Harakat ul-Jihadi-Islami (HUJI), wants an Islamic state in Bangladesh. It is suspected of being involved in the July 2000 assassination attempt on Prime Minister Sheikh Hasina. The return of the Taliban in Afghanistan, it is feared, will create favourable circumstances for jihadi groups in Bangladesh to radicalise innocent youth who have no experience of the genocide committed by the Pakistani army during the liberation struggle.

Assassins of Bangladesh by Mohshin Habib, a Bangladeshi journalist and author – published to coincide with the 50th anniversary of the liberation of Bangladesh – outlines the poignant details of the evil designs of Pakistan’s ISI and the conspiracy hatched by its Bangladeshi collaborators who assassinated Bangabandhu and his family. Reading the book, one can conclude that the ideology that led to the elimination of Mujibur Rehman pushed the country towards military rule, reignited religious bigotry and cast a shadow on Indo-Bangladesh relations is still very much alive. And forces wedded to a bigoted form of Islam are only waiting for an opportune moment to strike back. Recalling the unfortunate happening of 15 August 1975, the author sends a clarion message that fighting against fundamentalist ideology is necessary to uphold secularism and pluralism.

In keeping with the spirit, an international conference in The Hague has demanded that the international community recognise the 1971 genocide committed by Pakistani soldiers and put pressure on the Pakistan government to offer an unconditional apology to the people of Bangladesh for the crimes committed against humanity during the nine-month-long Liberation War. The conference was organised by the Europe-based Bangladeshi diaspora organisation, European Bangladesh Forum (EBF), in collaboration with Switzerland Human Rights Commission Bangladesh on November 30 at the Nieuwspoort, Internationaal Perscentrum, attached to the Parliament building in The Hague.

‘Operation Searchlight’ was the codename of the horrendous nine-month-long military crackdown on East Pakistan (now Bangladesh) launched in March 1971 by the Pakistani military and backed by pro-Pakistani Islamist militias of the Bangladesh Jamaat-e-Islami. An estimated three million people were slaughtered. Some four million women are said to have been raped in course of the genocide. Around 30 million people were rendered homeless and 8 to10 million fled their country to seek refuge in neighbouring India.

Should Pakistan not hang its head in shame? It is not enough to demand an apology. Bangladesh should demand reparations for the loss and damage suffered by its people. Pakistan should pay for the war crimes it committed in Bangladesh.