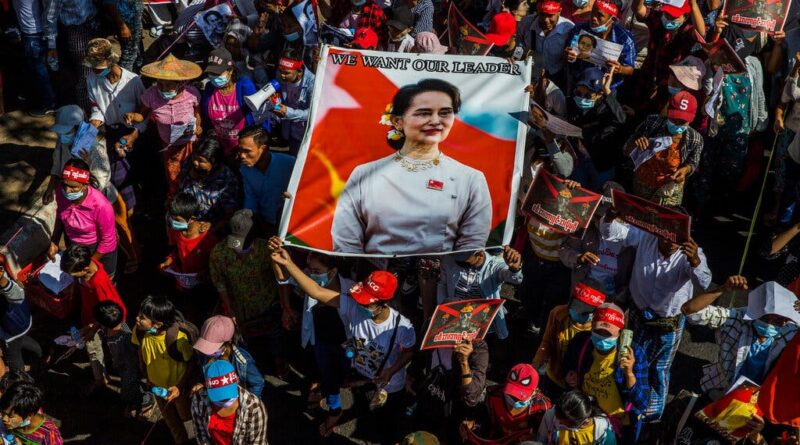 Despite their superior numbers and firepower, and persecution of Myanmar’s iconic Lady, the Tatmadaw has been unable to stamp out resistance to its rule.  Sudha Ramachandran reports

On December 6, a Myanmar court handed out a guilty verdict to ousted leader Aung San Suu Kyi. She was given a two-year jail sentence for inciting dissent and another four years for breaching Covid-19 restrictions at a campaign rally last year.

Both the trial and the verdicts are unfair and farcical. The hearings were held in secret and Suu Kyi’s lawyers were forbidden from reporting the proceedings. That the trial was a cruel farce is without doubt. Consider this: as evidence that Suu Kyi had disturbed public order, the prosecution cited statements on the National League for Democracy’s Facebook page. These statements were posted after the February 1 military coup, when she and other NLD leaders were already in the custody of the junta.

The recent verdicts relate to only two charges. Suu Kyi faces nine more, five of which are to do with corruption. Each of these carry a penalty of up to 15 years in prison. If she is convicted on all charges, she could face a cumulative sentence of over 100 years.

Clearly, the Tatmadaw, as the Myanmar military is called, would like to see her locked away indefinitely. The aim, of course, is to deprive the pro-democracy movement of a powerful leader –  after all, the 76-year-old Suu Kyi, who is the daughter of Myanmar’s founding-father Gen. Aung San, is widely revered in Myanmar.

But keeping her under lock and key in an unknown location will not resolve the Tatmadaw’s problems, as her current persecution by the generals is only serving to reinforce her popularity and symbolic influence.

It is 11months since the Tatmadaw overthrew the NLD government. Thousands of civilians have been shot dead or jailed in the months since. Disappointed with their peaceful protests not bearing fruit, young women and men have picked up arms in droves. Across the country civilian militias have joined hands with ethnic armies to fight junta forces.

To unify a fragmented resistance, Myanmar’s opposition parties have formed a National Unity Government (NUG). The NUG has brought together civilian militias under its military wing, the People’s Defense Force, and in September declared a ‘people’s defensive war’ against the junta.

Despite its superior numbers and weaponry, and willingness to unleash horrific levels of violence on people, the Tatmadaw has not been able to stamp out the resistance to its rule. Indeed, things are not looking too good for the generals, and the road ahead for the coup leaders is not quite as obstacle-free as Senior General Min Aung Hlaing would have imagined in the run-up to his power grab.

Myanmar’s military appears to be suffering mounting casualties in its attempt to quell increasing armed resistance. On December 19, for instance, around 500 junta troops made ten attempts to take control of a Myanmar National Democratic Alliance Army (MNDAA) camp in northern Shan State. Ground troops were backed by artillery fire and aerial bombarding of the camp by military jets. However, not only were the troops unable to capture the MNDAA base, they also suffered heavy casualties. According to a report in The Irrawaddy, almost 100 soldiers, including several army captains, were killed or wounded in the fighting with the MNDAA.

Defections from the military are growing and while this is not yet on a scale sufficient to topple the Tatmadaw, it is impacting the morale of troops.

Meanwhile, the Myanmar Accountability Project (MAP), a UK-based human rights group, said in a statement that it has submitted to the International Criminal Court evidence of crimes against humanity allegedly perpetrated by Min Aung Hlaing. In its submission under Article 15 of the Rome Statute, MAP has urged the ICC to open a criminal investigation into the ‘widespread and systematic use of torture’ by the military against civilian protestors following the February 1 coup.

‘The leader of the illegal coup is criminally responsible for the security forces under his command committing mass atrocity crimes,’ MAP’s Director, Chris Gunness, said in a statement. ‘The prospects of a conviction are good and we believe that grounds for issuing an arrest warrant against Min Aung Hlaing are overwhelming,’ he added.

Although things are not going smoothly for the Tatmadaw, Min Aung Hlaing is far from being tried for the terrible atrocities he is unleashing on the people of Myanmar.

Still, he is taking no chances.

It is well known that Myanmar’s generals are highly superstitious. They have Buddhist monks and astrologers advising them on every step they take, and Min Aung Hlaing is seeking the blessings of deities to secure his grip on power.

On December 18, he was seen with his family at the Kyaik Devi pagoda in Hlegu Township on the outskirts of Yangon. Accompanying them were Buddhist monks Dhammasuta Chekinda and U, and occult practitioner Vasipake Sayadaw. (U Kovida is reported to have advised the Senior General to order his troops to shoot protestors in the head during the first weeks after the coup.) They were seen directing the rituals and guiding Min Aung Hlaing as he placed a new diamond orb on the highest part of a pagoda (a Buddhist shrine).

The day after Min Aung Hlaing’s efforts to seek divine blessings, his troops were roundly defeated in the face-off with the MNDAA.

His strategy to seek divine intervention to secure his hold on power does not seem to be working – perhaps a form of divine justice after all.