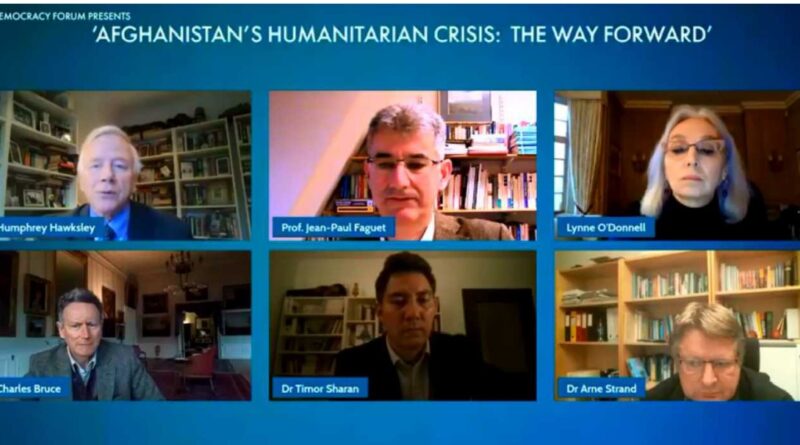 In its opening seminar of 2022, The Democracy Forum shone a spotlight on the plight of Afghansand the dilemma facing the international community as it seeks to offer support

The humanitarian catastrophe facing the people of Afghanistan – impacted by drought, Covid-19, an imploding economy and declining rights under the new regime – was the subject of The Democracy Forum’s first virtual seminar of the year.

In his introductory comments, TDF President Lord Bruce noted that, despite many important issues affecting democracy and human rights in the Asia Pacific region, it is vital to continue shining a spotlight on the plight of Afghanistan as it faces theprospect of widescale starvation amid a plummeting currency and over-dependency on imported food. The largest single concentration of foreign reserves allocated to Afghanistan, held within the World Bank’s Afghanistan Reconstruction Trust Fund, could enable UNICEF to provide 12.5 million people with basic and essential health services, including vaccinations, and the World Food Programme to provide 2.7 million people with food assistance. But such a programme will not be sustainable,warned Lord Bruce, without the co-operation of the Afghan government and the support of the international community, along with other possible initiatives such as expanding sanctions relief to small businesses, resuming paying the wages of key public sector employees, and the gradual release of foreign exchange reserves to offset the balance of payments crisis.

Striking a pessimistic note, Christine Fair, Professor of Security Studies at Georgetown University, saw no obvious way forward, given that the problem facing Afghanistan today dates back to the early 20th century, when Afghanistan entered the comity of nations as a rentier state, subsidised by the British. Thereafter, the gap was filled by Russia, then the USSR, then the international community – largely the US – whose huge state-building apparatus was not based around the needs of Afghans but was, rather, driven by the domestic interests of various troop-contributing countries. Fair expressed her dismay at the inability of the international community to focus on economic sustainability in Afghanistan, and spoke of the ecosystem of corruption, built by the international system but also benefited from by Afghan elites. She located the problem facing Afghanistan today squarely with the Taliban – who don’t want aid to go through aid organisations – and their Pakistani enablers: for example, Pakistan insisted on being the vector of delivery for Saudi aid, claiming to alleviate Afghans’ misery when they were, in fact, causing it. She addressed the Taliban’s long-standing ties with the Chinese, who also had links with al-Qaeda, and said what the Chinese and Taliban want from each other – just enough security to access Afghanistan’s vast resources – is far more do-able than the US and NATO’s desire for a ‘functioningdemocratic-esque juggernautfunded by our contractors’. The conundrum of how to aid the Afghan people without abetting the Taliban has no robust answers, Fair admitted, though she referenced India’s efforts, noting that Pakistan always refused India overland transit of food products destined for Afghans through Pakistani territory. Ultimately, Pakistan wants the Taliban in place in Afghanistan in order to keep India out.

Dr Timor Sharan, Executive Director of Afghanistan Policy Lab and an International Development expert,spoke of the unsustainable ‘band-aid’ effort to address Afghanistan’s economic and humanitarian crisis. He stressed the need to get the economy running, give people access to education and work, and resolve the banking and liquidity crisis – a situation in which he believed the US should show more political will. Also key to finding a way forward is that the Taliban must demonstrate an ability to govern and make serious changes, such as female rights to education and work, inclusivity at all levels, diversity in representation, etc. In terms of revenue collection in this largely cash-based economy, the Taliban must be transparent – for example, where is revenue going, if not to pay public servants? – and the problem of entrenched criminality must be addressed, to prevent localised conflicts. Sharan expressed disappointment at the Biden administration’s unfair placing of blame for the current situation at the door of Afghans, and concluded that, as well as an international issue, Afghanistan is also a regional one.

Repression of the media under the Taliban, and its impact on the humanitarian situation in Afghanistan, was the focus for author &journalistLynne O’Donnell. She criticised what she saw as revisionism, saying the current situation – starvation, poverty, violence, ethnic disparities, food insecurity in winter – had also been happening before the current Taliban regime.  Regarding Afghanistan’s once fair and free media, O’Donnell argued that had changed, not on August 15 2021, but on 29 February 2020, in the Taliban-Trump agreement, which emboldened the Taliban to relaunch attacks on women and the media, taking back gains made earlier. Only a trace of Afghanistan’s free media is left today, with a lot of information now coming out of the country via social media, which is not reliable. There is thus no media to hold the Taliban to account for its actions, said O’Donnell. Regarding regional players, she agreedthat Pakistan will not allow India to be proactive on any level in aiding Afghanistan, and said Islamabad has washed its hands of any responsibility for what is happening in Afghanistan, the takeover of which was an implicit aim of Pakistan’s intelligence and military establishment. In terms of humanitarian assistance, she urged people to get real money into the Afghan economy via small, legitimate grass-roots organisations.

Dr Arne Strand, a Senior Researcher at the Chr. Michelsen Institute,addressed ways to engage with the new Taliban regime, in order to meet the humanitarian challenges facing the people of Afghanistan today, as well as considering underlying economic and development challenges. Aid dependency is not a solution, he said, but development is key, and one cannot overlook the role of the private sector in rebuilding the nation. Strand stressed the importance of creating a dialogue, in order to have better understanding of what the Taliban stands for today. Even if we don’t like the Taliban, we need to engage with them on some level, he said, since, if the international community has no influence in Afghanistan, that will provide a space for groups such as Islamic State to proliferate.

Assisted by illustrative slides, Jean-Paul Faguet, Professor of the Political Economy of Development at the LSE, looked at what we know about building effective and responsive democracies in developing countries such as Afghanistan. He highlighted models of government structures, saying that political systems should reflect the underlying cleavages that define a society, such as left-right divisions, ethnic or religious divisions, and considered how to organise political systems in societies with such fragmentations, such as Afghanistan.