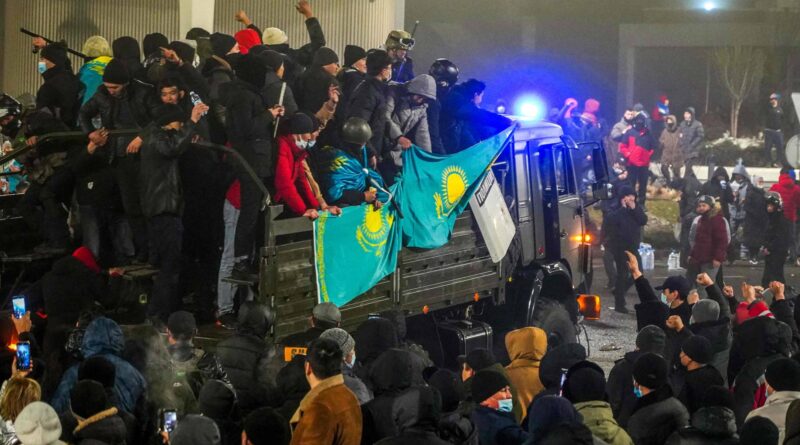 Richard Gregson  recounts a story of greed and looting by the Central Asian country’s ruling elite, the hardships endured by the masses, and the widespread anger that ensued

Rich in natural resources, Kazakhstan –Central Asia’s largest country, with two time zones and a relatively small population of around 19 million – suddenly erupted at the beginning of 2022. High on liquor, a commodity still cheaply available as prices of essentials have sky-rocketed, demonstrators took to the streets inprotest asNew Year revelry turned violent in the city of Zhanaozen, in the western region of Mangystau, where most of the country’s oil and gas installations, the mainstay of the Kazakh economy, are located.

Asteep hike in liquified petroleum gas(LPG) prices announcedon January 1proved to be the proverbial last straw.Within two days, the rioting had spread to Almaty, the largest city and a commercial hub, and other major centres of this oil-rich former Soviet republic. Taken aback by the ferocity of the agitation, the government promptly restored the cap on LPG prices. But by then the protests had already taken a political turn.

The people’s pent-up anger against the corrupt ruling elite had exploded, with cries of ‘Shal Ket’ (‘Old man out’), a reference to former president and strongman Nursultan Nazarbayev. While a systematic campaign was orchestrated on social media and by a section of the ‘liberal’ media known for their pro-West and anti-Russia tilt, crowds looted supermarkets, raided ATMs, torched cars, and even seized armoured military vehicles, snatching weapons. Government buildings, the prosecutor’s office, the National Security Committee building, TV studios and other sites were ransacked or burned down in Almaty. The airport was occupied for several hours.

The marauding crowds were generally leaderless, but there were armed elements inciting the frustrated men, who seemed to be enjoying their new-found power to rebel against the corrupt ruling elite and bureaucracy – a legacy of the former Soviet Communist Party and erstwhile President Nazarbayev, whose personality cult had stalked the country in the form of numerous statutes, one demolished by agitators in the city of Taldykorganat the dawn of this year.

Bestowed with the title ‘Leader of the Nation’, or Elbasy, 81-year-old Nazarbayev, his family and coterie of loyal leaders have unabashedly looted Kazakhstan, enriching themselves while many ordinary people live in poverty, suffering hardships such as erratic power supplies and lack of running water. President Kassym-Jomart Tokayev, hand-picked by Nazarbayev when he stepped aside in 2019, after ruling the country for nearly 30 years, moved swiftly to restore order. Tokayev became chair of the Security Council, which was still headed by Nazarbayev, who held the reins of power behind the scenes. But Tokayev pounced upon the opportunity and stripped his mentor of all of lifetime posts.

He then went on to dismiss Karim Massimov, Nazarbayev’s right-hand man and chief of the National Security Committee (KNB), the country’s powerful intelligence service. Having failed to forewarn the security forces of the impending trouble, Massimov was arrested for a suspected coup attempt in cohort with ‘certain foreign powers’. Tokayev also dismissed the entire government, led by another Nazarbayev confidant, Askar Mamin, and declared a state of emergency. Shoot-on-sight orders were issued. Not taking any chance, he called on the Collective Security Treaty Organisation (CSTO), a military alliance of former Soviet Republics, for help. Soon troops arrived from Russia and other CSTO countries to guard important installations, oilfields and other assets.

As a transit country connecting European, Asian and Middle Eastern markets, and a part of China’s BRI, Kazakhstan has both geopolitical and geo-economic significance

By January 5, the government was in control of the situation.Troops battled with armed groups in Almaty and other cities. By evening, the protesters had disappeared. The anti-riot operations wereconducted by Kazakh forces with minimal help from the CSTO peacekeepers.The crisis left 225 people dead, more than 2,600 injured, and 67 hospitalised in a serious condition, according to official figures.The dead included police personnel, twoof whom were beheaded – indicating, perhaps,the involvement of jihadi elements.

Amid complaints of police brutality and torture by opposition groups and human rights activists as the security forces cracked down on the agitators, it is not clear exactly how the widespread violence began. No doubt anger among the people had been building up for a long time and their frustration simply exploded. But, during a virtual meeting with Charles Michel, President of the European Council, President Tokayev spoke of the involvement of foreign militants from Afghanistan and the Middle East. He said he had no doubt that the unrest in Kazakhstan was a ‘terrorist attack, intended to form a ‘zone of controlled chaos’ with the aim of seizing of power.

Discontent has, however, been brewing for more than a decade against the autocratic aristocracy led by Nazarbayev. Strategically located between Russia and China, Kazakhstan, with its vast oil and gas reserves and natural resources, has been a popular investment destination. Since it gained independence from the Soviet Union in 1989, the country has attracted over $320 billion inforeign direct investment (FDI). International energy giants have invested heavily in its oil and gas fields.A transit country connecting European, Asian and Middle Eastern markets, and a part of China’s Belt and Road Initiative, Kazakhstan has both geopolitical and geo-economic significance. Russia maintains a close watch on developments in this former Soviet satellite.

While the rich have grown richer, the common people’s living conditions are pitiful, made worse by the Covid pandemic and lockdowns. Unemployment grew by 12 per cent in 2021 and prices have soared. With oil prices plummeting, the government had little room to provide relief to the people.

It is a grim fact that a handful of 162 Kazakhs own 50 per cent of the country’s wealth, according to a report released by KPMG in 2019. The elite is said to have stashed away billions in secret offshore vehicles and bank accounts. During the pandemic, when desperate people were borrowing money to make ends meet, the number of officially-declared billionaires in Kazakhstan grew from four to seven. A recent report released by Chatham House reveals the Kazakh elite own luxury properties in London and the southeast, worth at least £530 million.  Luxury villas and mansions owned by the Nazarbayev family are valued at £330 million. These are just the tip of the iceberg.

On January 19, Tokayev sacked Defence Minister Murat Bektanov, replacing him with Ruslan Zhaqsylyqov, formerly the deputy interior minister. Parliament’s lower chamber, the Mazhilis, also approved a motion by available lawmakers to rescind the provisions that gave the former president the right to lifetime chairmanship of the powerful Security Council and the Assembly of Kazakhstan’s People.

As the CSTO forces leave, a large-scale purge is underway to dismantle the power structure, packed with Nazarbayev’s relatives and cronies. Samat Abish, Nazarbayev’s nephew, was dismissed from his post as deputy head of the KNB. The former president’s three sons-in-law – Dimash Dosanov, Kairat Sharipbayev and Timur Kulibayev –have been removed from important positions they held in government bodies and large energy companies. Sharipbayev was in charge of the national gas company, Qazaq Gaz, which Tokayev has blamed for the hike in LPG prices that sparked the countrywide agitation. The three men are the country’s richest barons with sizeable holdings in Kazakhstan’s energy sector. Kulibayev and his wife, Nazarbayev’s daughter Dinara, also control Kazakhstan’s largest commercial bank, Halyk. Many of the Elbasy’s relatives and cronies are reported to have fled the country.

Tokayev, in his first attack on Nazarbayev, said the founder president had failed to share the country’s vast wealth with ordinary Kazakhs. The capital, renamed in his ‘honour’ as Nur-Sultan – moved from Almaty in 1994 – is a classic instance of the dictator’s whims, splurging billions of dollars on vanity projects in the city.

Originally Akmolinsk, it was renamed Tselinograd in 1961, Aqmolain 1992, and Astana in 1998. After Nazarbayev stepped aside in 2019, the city was renamed Nur-Sultan by his appointee-successor, Tokayev. Today, Kazakhstan has Nur-Sultan Airport and Nur-Sultan Railway Station of the Trans-Kazakhstan and South Siberian railways. Reports suggest that Nur-Sultan may become Astana, meaning ‘the capital’, once again.

Rumours of the former leader having fled or been killed were laid to rest after a heavily edited short video was released in early January, wherein Nazarbayev claims to be a ‘pensioner’ taking ‘a well-deserved rest’, and says he has transferred all powers to Tokayev. An online petition has been issued by a group of Kazakh citizens, demanding that the immunity guaranteed to Nazarbayev by law be revoked. Will the ageing dictator, his clan and cronies ever be brought to justice?