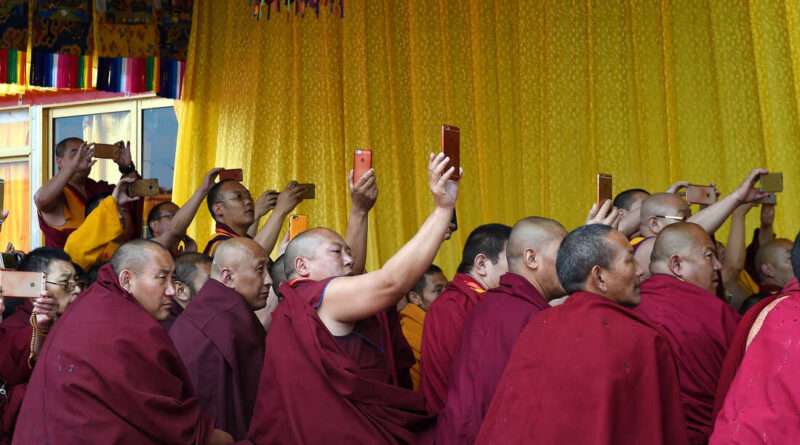 A new website offers a guide to decrypting hundreds of Chinese propaganda words and phrases from a Tibetan perspective. Tsering Tsomo and Gabriel Lafitte highlight its uniqueness

Yet who frames the debate defines the language of what is admissible, even what is imaginable. Intrinsic to the Chinese Communist Party’s repudiation of the West is deep frustration that the English language and, more broadly, liberal concepts are hardwired into globalist discourse. China’s leaders feel trapped by this hegemony, and seek to break free of constraints, rewrite the boundaries of what is sayable, declare a new world order.

For all that China rigorously imitates neoliberal modernity, it chafes at the rising refusal of the established world order to countenance China’s ongoing rise as far as superpower status beyond China’s inevitable sphere of influence in Asia. For the world’s factory, decoupling is not an attractive response, definitely not at a time when domestic buying power is still weak, no substitute for export income. So, what to do?

Capturing the discourse is a long-term strategy now gathering momentum, just as burgeoning economic and military power took decades to build. Discourse power is more than the sum of slogans and keywords advanced by central leaders to naturalise China’s rise as the greatest of civilisations, the most magnificent, successful and continuous that the world has ever known.

The jargons, mass campaign slogans, mnemonic memes that cadres must performatively declaim are the building blocks of making China one voice, one thinker, one leader who speaks for all. That extreme of team building, rallying round Xi Jinping Thought, enables China to project its one voice globally.

China calls this theme building. When a favourite propaganda phrase is inserted into a globally agreed document, official media proclaim it another triumph of China’s rising global discourse power. Usually, when China’s official tropes appear in the text of a UN treaty Declaration, it is a vague and anodyne phrase, such as ‘ecological civilisation’, ‘a shared destiny for all mankind’, ‘common but differentiated responsibilities’, ‘man and nature in harmony’, ‘whole process democracy’, ‘east is rising, west is declining’.

Vague and multivalent they may be, yet official China takes inordinate pride in their insertion into UN language, a sign that more formulations are to come, to be lobbied for in conference hallways.

Decoding China’s newspeak is not a sidebar to the real competition for economic dominance and military force projection. Discerning China’s motives and implicit meanings now matters, and not only to translators and linguists, specialists and Sinophiles.

China’s ambition is to overturn the universals foundational to the post-war global order. The CCP objects strenuously to any universal declaration of human rights because it proclaims universality, that to be born human is to be born with rights. This is anathema to a centralised party-state that asserts rights are the gift of the leader, can be withdrawn at any time to punish transgressors, and are definable only by the core leader. Hence ‘common but differentiated’ carries much baggage. In practice, it means China issues White Papers declaring the human rights of the Tibetans have been fulfilled, because they all have smartphones.

DecodingCCP.org entries refrain from asserting new absolutes, leaving room for users to decide for themselves what is a suitable conclusion

If the logic of that eludes you, you might be a candidate for a deeper dive into the inner logics of China’s propaganda, into the mind of contemporary authoritarianism. In China’s official authoritative voice, the only human right that matters is the right to material development, while the sort of rights ennobled by the 1948 UDHR are a bourgeois luxury for later. Thus the six million Tibetans all have phones, complete with constant state surveillance by capturing phone data, so the Tibetans have their human rights bestowed upon them by a benevolent state.

As the newspeak proliferates, examples are plentiful. Discourse power is built gradually but inexorably, lubricated by Chinese money in many countries amenable to the spread of a new discourse that privileges the state as the source of meaning as well as of progress. China exports not only its highway, railway, dam, power grid and mining engineering projects, but a project language that always gives agency to the state, with citizens required to be grateful beneficiaries. This suits authoritarian leaders worldwide, and China has an entrenched bloc of like-minded authoritarians embedded in the UN Human Rights Council and many more agencies of global governance.

Decoding  matters. Orwell taught us that 75 years ago. Now we are again in a time of dictators patrolling the borders of what is sayable and even imaginable, we need to go deeper into the mindset that normalises extreme control and extreme obedience through strict language control.

Our guides ideally should be people with long experience under such constricting closures of the mind, who still managed to discern the intent behind the slogans. Tibetans have done so over seven decades under the arrogant and racist language imposed by China, a language that considered itself revolutionary and now socialist, yet retains the imperial hauteur of court annalists to whom non-Han ethnicities are remote, uncooked, barbarian tribes. For many centuries the Tibetans have lived alongside their much bigger and more powerful neighbour, weathered the imperial fiction that all who are in contact with the magnificence of Chinese civilisation invariably become Chinese, except for a few stubborn holdouts still immersed in feudal thinking, who resist the inevitable. For over a thousand years the Tibetans have not only decoded the metropolitan gaze, they deftly exposed the hollowness, rigidity, absurdity and deeply racist assumptions baked into the imperial discourse, and today’s CCP discourse, on all under heaven bowing to Beijing.

Decoding CCP.org is the result, a new website of Tibetan insights into CCP discourse power projection. Each propaganda slogan is first presented in its official rendition, in each of the three languages: Chinese, Tibetan and English, since there are standardised official versions. From that epideictic starting point, each entry then deconstructs the unconscious biases packed in, the implicit meanings and long-term agendas. Yet DecodingCCP.org entries refrain from asserting new absolutes, leaving room for users to decide for themselves what is a suitable conclusion. We have deployed a process arising from the Tibetan Buddhist logic tradition of deconstructing all claims of absolute truth, without then inserting any Tibetan absolutes.

In a time of China’s alarming rise and rise, there are many decoders available. What makes Decoding CCP.org unique is its Tibetan triangulation of the CCP’s hegemonic strategy of discourse, its evocation of the resonances of Chinese tradition embedded in those campaign slogans, and its Tibetan sense of the absurd.

Tsering Tsomo is the Director of the Tibetan Centre for Human Rights and Democracy based in Dharamsala, India.