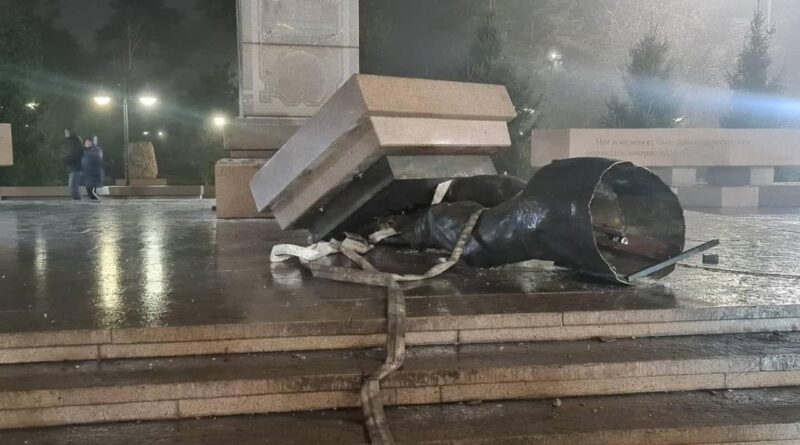 Despite protesters in Kazakhstan targeting former president Nazarbayev and his wealthy family, Duncan Bartlett writes that the old order remains resilient, with the tacit support of Russia and China

One of the clearest ways for a crowd to signal its revolutionary intent is to topple a statue. When a stone image of an autocrat from Kazakhstan was hurled from a plinth last month, the action soon led to consequences for the man it represented.

Protestors chanted ‘Old man out!’ as they pulled down a statue of Nursultan Nazarbayev, the 81-year-old‘father of the nation’ who was president of the Central Asian country for three decades.

Kazakhstan is the largest economy in Central Asia, with significant reserves of uranium and other valuable minerals

The former ruler appeared in a video released on January 18. ‘Everyone knows that for 30 years I have been working tirelessly for the sake of our Motherland,’ he thundered.

Nazarbayev said he had handed all presidential powers to Kassym-Jomart Tokayev in 2019 and has since been a pensioner, enjoying a well-deserved break in Nur-Sultan, a city which he named after himself.

How much money this‘pensioner’ and his family have accumulated in foreign bank accounts remains a matter of speculation. A CIA probe in the 1990s suggested that oil speculators sent tens of millions of dollars to Mr Nazarbayev in the hope of obtaining contracts.

The former president was originally a man of humble means, who rose from his job in a metal furnace to become a Communist party boss when Kazakhstan was a part of the Soviet empire. Many of his family are now on the Forbes rich list.

Kazakhstan is the largest economy in Central Asia. As well as oil, it also has significant reserves of uranium and other valuable minerals. Just 162 people hold half of the country’s wealth, according to the accounting firm KPMG. The Financial Times claimed recently that around half of the economy belongs to the Nazarbayev family, directly or indirectly.

Resentment over wealth inequality appears to have been one of the catalysts for the protests, which started with a peaceful campaign to keep fuel prices low through government subsidies.As the demonstrations grew larger, fervour increased and crowds targeted public buildings. The city hall in the country’s largest city, Almaty, was set on fire. A mob also stormed the airport.

Human rights groups describe the response from the authorities as an aggressive crackdown. President Tokayev ordered the security forces to shoot protestors on sight, claiming they were terrorists. Initial reports suggest 164 people, including children, were killed, as well as 16 police officers. Some citizens held up banners with slogans saying, ‘We are not terrorists – do not shoot’.

When the government asked the Russians for help, President Putin flew in an elite military unit to protect key facilities in Kazakhstan. As many as 2,500 heavily armed Russian troops stood guard but were asked to withdraw after the violence was quelled.

The arrival of the Russians rang alarm bells in Washington and led to a warning from US Secretary of State Antony Blinken. Addressing reporters at a State Department briefing, Mr Blinken said that ‘a lesson of recent history is that once Russians are in your house, it’s sometimes very difficult to get them to leave’.

Around 20 percent of the population of Kazakhstan describe themselves as Russian by ethnicity. They live alongside Jews, Uzbeks, Dungans and other minorities. There are also around 500,000 Koreans in the country, descendants of a group who were forcibly deported from the Russian Far East in the 1930s as suspected sympathisers with Japan, at a time when the Soviet Union was preparing for war with the Axis powers.

China, which borders Kazakhstan to the East, is also influential. It has invested in roads, railways and land ports as part of its Belt and Road Initiative, intended to improve the trade route between China and Europe.

Some scholars who study Chinese security engagement in Central Asia say that Beijing may take a more active role in Kazakhstan.

‘We must raise our ability to respond to such blows and challenge them, not just internally but also pay[ing] close attention in our neighbourhood,’ said Shen Yi, a professor of international politics at Fudan University in Shanghai, in a video.

‘Not just realising China`s own domestic security and stability but also helping other countries deal with threats and challenges of this kind should become a complete new phase and a new important strategic task,’added Professor Yi.

The violent unrest in Kazakhstan was relatively short-lived and the public mood appeared calmer after President Tokayev, who trained as a diplomat, made a speech containing many bold promises.

He said a fund would be established to address social problems such as inequality. The fuel price increase has been reversed and there is to be a squeeze on corruption.Other recent reforms have included the abolition of the death penalty, although some 10,000 people still face charges in relation to the unrest. In a 2020 report, Amnesty International said that ‘torture and other ill-treatment remains widespread in penitentiary institutions’ in Kazakhstan.

Even if Mr Nazarbayev is exiled and his statues fall, the system which benefits the elite appears to have survived. Central Asia started the year with sparks of a revolution but the old guard have resisted a serious challenge to their power.