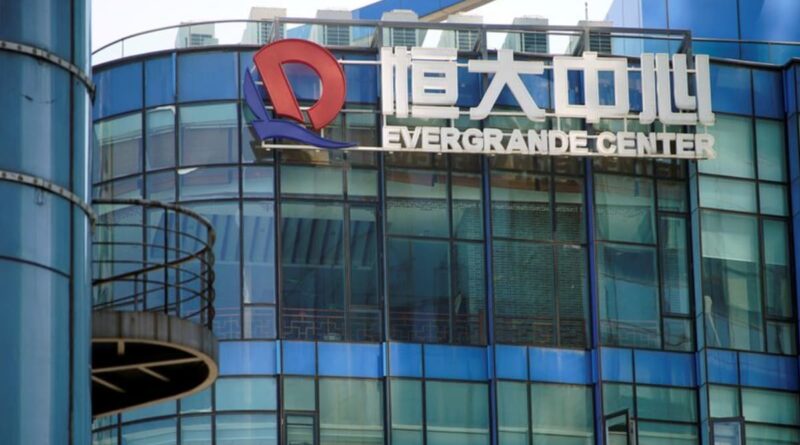 The end of peak China

For decades, China has been the engine of economic growth for Asia. But Paul Hodges, warns that the Asian giant now faces a range of unprecedented challenges, with worrying implications for the region

China’s leaders are prone to be extremely optimistic when speaking to their citizens through media outlets which are the organs of state propaganda.

So it was somewhat out of character when the premier Li Keqiang adopted a downbeat tone in a January speech, expressing his concern at a ‘complex and grim domestic and international environment’ and acknowledging‘new downward pressure on the economy’.

For many of his listeners, the expectation must be that the government will steer China through the storm to greater glory. President Xi Jinping promised last November that it was possible to double the country’s gross domestic product by 2035. There is also much talk of China overtaking the US as the world’s largest economy by the late 2020s.

A whole generation of Western financial analysts has been brought up to believe that, in order to keep the engine of growth running, any downturn will be automatically followed by a stimulus programme by the People’s Bank of China, just as day follows night.

They therefore expect more stimulus, well before President Xi’s expected reappointment at China`s 20th National Party Congress later this year. However, I can see several reasons to take seriously the warnings given by Premier Li Keqiang in January.

Covid remains a major concern, even though President Xi Jinping has hailed China’s approach to the pandemic as a ‘major strategic success’ and used it as evidence of the ‘significant advantages’ of its political system over Western liberal democracies.

Nevertheless, supply chains have been disrupted by lockdowns of major cities and transport hubs, triggered by the discovery of just a few cases. Covid has also had a negative impact internationally, with China’s borders effectively closed – except for the very determined.

President Xi himself has not left China since the virus was first detected in Wuhan and has only participated in international events via video link or through written statements. With the Beijing Olympics taking place in February and March, it seems unlikely that China’s strict policy on Covid will change significantly soon.

Another problem is the mounting property crisis. As Chinese people have grown richer, they have sought better places to live, with millions of citizens migrating from rural areas into the cities. During this time, China’s real estate bubble has effectively been ‘subprime on steroids’, with $41 trillion of stimulus pumped into the official and shadow banking sectors since 2009.

Given the outsize importance of China’s real estate sector – at 29 percent of GDP – this was a stimulant not only to the growth of the domestic economy but was also an important element in the global recovery. 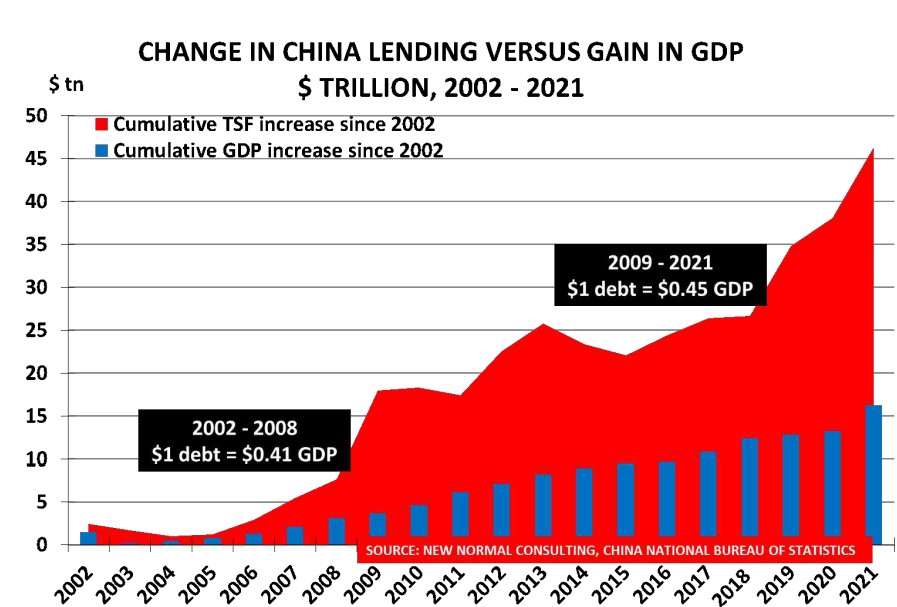 Just as in the United States, the speculative gains made in the property market led many people to feel rich enough to want to spend their gains on new cars, leading to a staggering rise in auto sales. Sales of cars in China grew four-fold between 2008 and 2018, enabling it to leapfrog the US and become the largest auto market in the world. But they have since fallen by nearly a quarter, despite a small uptick last year.

The underlying problem is that economic bubbles need more air to be pumped into them, if they are to stay afloat. But from the point of view of a return on investment, the figures reveal worrying trends. Even if one takes China’s GDP data at face value – which I do not wholly recommend – each dollar of debt only added 45 cents worth of GDP growth since the lending bubble developed (See chart).

Total debt as a percentage of GDP almost doubled to 270 per cent of GDP in 2020, from 141 per cent in 2008. This creates a major challenge for policy-makers.  I therefore wonder who will face the consequences of bursting the bubble, given that this will be bad news for millions of Chinese citizens in the short-term?

In many cases, provincial and national leaders have been taking an ostrich-in-the sand approach, perhaps hoping their successors will resolve the conundrum. However, in my opinion, this leaves them blind to the risk of social unrest.

In cities such as Shanghai, extraordinarily high house prices can cost more than 40 times average earnings. Young people struggle to get on the property ladder and starting a family only adds to the financial burden, making it an unaffordable aspiration for many urban couples. Resentment over the high cost of property was one factor in the street protests in Hong Kong in 2019.

So what happens next?  All depends on President Xi. If, as expected, he remains in office for another two terms, he will want to prioritise the long-term resolution of the bubble problem, rather than ignore it. I believe the signals show action is imminent and this is why Premier Li helped brace the country for difficult times ahead with his stern speech in January.

To my mind, the most immediate risk to China’s economic stability is the real estate sector. Evergrande, the world’s most indebted property developer with over $300bn of debt, defaulted at the end of last year and has since been followed into trouble by several other companies in the sector.

Unfortunately, China’s opaque approach to accounting makes it hard to judge the scale of the problem. Unsold properties can remain on the balance sheet as assets, irrespective of the fact they have failed to find a buyer.

There is also a problem for prefectural governments, which often expect a large part of their income to be derived from money they make from selling land to property developers.

Worries about property have had an impact on consumer spending, which has started to weaken. But we are in uncharted waters, as China has never experienced a major property downturn since private ownership began in cities just over 20 years ago.

A bursting of the real estate bubble would not only affect people in China. It will also impact companies from other countries which expect Chinese consumers to keep buying more of everything – from oil to luxury designer clothes. A downturn in the Chinese economy would have a knock-on effect on other developing economies, which have been supported in recent years by increasing investment flows from China. Most countries in Asia have China as their most important trading partner.

This is not to argue that China’s economy is about to collapse. But the  remarkable growth it has enjoyed in the past few decades is unsustainable.  Asia’s leaders and decision-makers should be aware that they may have glimpsed the summit of the Chinese mountain. They face a steep descent.

Paul Hodges is chairman of New Normal Consulting, a Swiss-based strategy consultancy advising companies and investors on international issues, such as developments in China