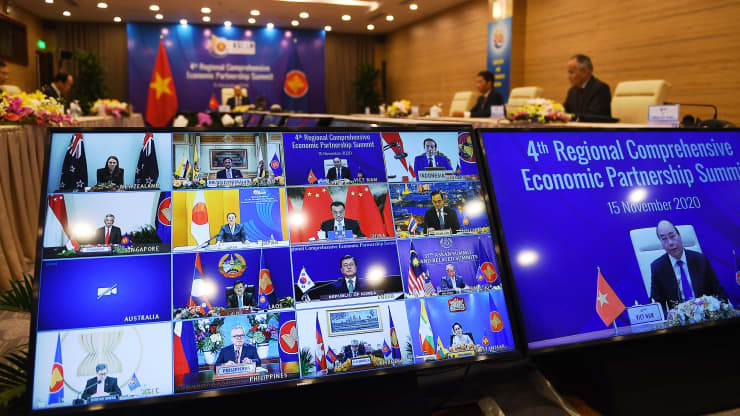 Too good to be true?

Despite its apparent far-sightedness, to be fully understood the Asia-Pacific’s Regional Comprehensive Economic Partnership must be viewed in context, urges Phar Kim Beng

Free Trade Agreements (FTAs), contrary to popular opinion, are not akin to the magic incantation ‘Open Sesame’. Indeed, they can result in tariff and non-tariff barriers being left wide open.

One particular FTA, the Regional Comprehensive Economic Partnership (RCEP),contains a mere two lines on electronic commerce. How visionary, therefore, can it be? If anything, it is perhaps the most archaic FTA in recent years, despite being dubbed‘ the world’s biggest free trade agreement’.

By aggregating the Gross Domestic Product of the 15 member states, the moniker of ‘biggest FTA’ does seem apt. Yet if it is the biggest, why did the United States and India not join it? Something does not square.

First, RCEP is too good to be true – that is, if one understands and takes into account the political economy of the region above all else. RCEP’s chief ostensible benefit has been estimated by the Peterson Institute of International Economics to be a 2 per cent annual growth to GDP.  But this projection was completed prior to the pandemic.

Second, the belief that 90 per cent of China’s market would be reduced to the lowest tariff, as claimed by David Goldman in Asia Times Premium, is much mistaken. Why?

This is because, prior to an economy being ‘liberalised’, special vested interests of that country’s leaders or politicians have set in, perhaps long ago. This is why the likes of the United States has what is known as Act 301 in their Trade Regulations, which essentially amounts to a form of ‘crowbar commercial diplomacy’.

Third, a trading partner, even a security treaty partner, should remain adamant in not deregulating the sectors to which the other side has either agreed, or has been foot-dragging indefinitely by offering all forms of excuses.

Certainly, the United States’ Office of Commerce and Trade, even the Treasury Department, can ban what it deems to be an unfairly protective country from exporting their goods into the United States’ market. This is known as the Super Trade Law of the US.

In extreme cases, if the country continues to list their stocks on the American stock market, the American president, by way of a presidential order, can bar their listing altogether. This is a fate that nearly affected Byte Dance, the parent company of Tik Tok.

By this token, while some 15 member states of RCEP may rejoice in the fact that they can now sell their goods to China, they should keep in mind that, other than coal – which forms 64-70 per cent of China’s domestic energy consumption – China is experiencing an energy shortfall. Electrical brownouts are rampant, especially in the northern part of China.

With Indonesia experiencing its own energy shortage, President Joko Widodo has banned its coal from being exported to China, in order to meet Indonesia’s own needs.

Now, this has be understood within the context of nearly 30 per cent of the huge Chinese economy being exposed or vulnerable to foreign markets. This means China has a serious structural economic problem domestically, which is too often glossed over by commentators.

Electrical brownouts are rampant, especially in the northern part of China

Since India has had a geopolitical border conflict with China in the Himalayan plateau since 2017, there is every likelihood of tit-for-tat behaviour embedded into RCEP, should India join the partnership – a prospect that remains doubtful between now and 2023, when Prime Minister Narendra Modi needs to squeeze every ounce of Greater Indian nationalism to extract maximum votes by playing the anti-China card.

In turn, despite the fact that President Xi Jinping has ordered the creation of the Commercial Arbitration Court in Shenzhen to look into any inter-corporate disputes, trust in Chinese commercial dispute resolution will remain low as long as one-man rule remains.

Finally, at the 19th Chinese Communist Party Congress in 2017, then again at the Sixth Plenum, held in November 2021, President Xi introduced what is essentially his own thinking – known as Xi Jinping Thought – to supersede all other leaders’ prior ideology, including Chairman Mao’s (although the latter was Mao’s own rendition of Karl Marx’s economic thinking).

Except for the tight inner circle that includes Wang Huning, confidant to President Xi; State Councillor Yang Jiechi; and Liu He, China’s main trade negotiator with the United States, all of whom enjoy close proximity to, and the trust of, President Xi Jinping, almost no upper-middle-class person in China fully grasps the concept of ‘Common Prosperity’ yet, as a means of closing the income gap.

DecodingCCP.org entries refrain from asserting new absolutes, leaving room for users to decide for themselves what is a suitable conclusion

According to Professor Steve Tsang of London University’s School of Oriental and African Studies, even the Chinese Communist Party (CCP) dreads receiving any money from multinational companies or wealthy individuals, lest it is accused of corruption. Thus, while President Xi Jinping has asked the rich to give away their wealth as charity, in order to reduce income disparity, the rich do not know to whom they should give their money, while the CCP prefers to steer itself away from this initiative.

While this is no different from Corporate Social Responsibility (CSR) seen in multinational corporations in the West, which can be underpinned by the concept of Triple Stakeholders Accounting, the latter exists to cater to the employees, stakeholders and consumers, or the Social Accounting Initiative (SCI), all of which are compatible with the nine principles of the UN Global Compact and UN Millennium Development Goals.

Thus, at the very least, the UN-approved CSR implies that multinational corporations can gain instantly from this UN branding.

So, if all the countries were rejoicing about RCEP on January 1 2022, they should think twice about operating in a country without the rule of law.

In sum, there is no telling whether all member states of RCEP would like to be so led by Beijing, given its one-man rule by President Xi Jinping.

In 2020-2021, the rest of the world has seen how China dealt with its technology, tutoring, and celebrity live telecasters on the internet, with one broadcaster fined a whopping US$250 million for unpaid taxes, although she was the top seller of the Ali Baba Group.

Phar Kim Beng, PhD is founder and CEO of Strategic Pan Indo-Pacific Arena (Strategicpipa.com). He is the former Director of Political and Security Community in the ASEAN Secretariat