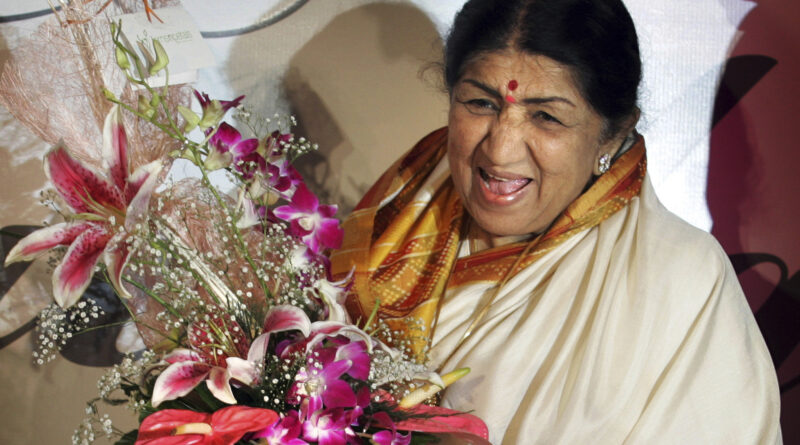 Goodnight to the nightingale

MJ Akbar sings the praises of the late, great playback singer Lata Mangeshkar, whose exquisite voice will live on, following her death at the age of 92

Time is cold, ruthless and cosmic; you cannot hold on to time. But you can hold on to events. They slip into the honeycomb of memory, lie asleep in a cell, waiting to be woken. Perhaps it was the late 1980s when I realised that Lata Mangeshkar possessed something infinitely more magnetic than a glorious voice.

By the end of the 1980s, commercial aeroplanes had become fatter, seats more comfortable, and entertainment options more varied. Air India introduced a separate audio channel of Hindi film classics from the 1950s and 1960s. It became my comfort food on any long journey; I flew Air India if Air India flew to my destination. It was the return trip which sealed the deal. Even after a week abroad, one began to miss what we took for granted: the constant backdrop of popular music in our lives. The very first thing I did on a flight was to switch on this channel, and even amid the muddy clouds above New York’s airport you knew you were back in your own world once Lata began to sing ‘Woh chand khila, who taarey haseen, yeh raat ajab matwaari hai/ Samajhne waale samajh chukey hain, na samjhe who anaari hai’ or ‘Tera jaana, dil kay ar-maanon ka lut jaana/ Koi dekhey ban ke taqdeeron ka mit jaana’. Nowhere did the path of true love travel through more melancholy and hope than in the lanes of 1950s Bollywood.

Of course, the Air India track also had songs by the glorious quartet of Mohammed Rafi, Mukesh, Manna Dey and Kishore Kumar. But the men never had the same impact, for reasons one could not quite fathom. Perhaps a man is a walk in the park; a woman brings you home.

The critical dominance of the ‘playback singer’ is unique to our cinema, for we Indians cannot love or mourn, laugh or cry, except through a blend of poetry and music. Dev Anand once told me that his greatest film, Guide, was a flop when first released in 1965. It became a hit only after a week in the cinema halls, by which time its music had reached the people’s lips. Guide was a breath taking, radical film, far ahead of its time. It was a heroine’s story. Rosie, rejecting the boredom of life with her archaeologist husband, escapes from marriage, abetted by her lover Raju, to become an independent, professional dancer. Raju doubles up as her manager; the two live together. But her success exacts a price; she feels betrayed, financially, by Raju. The film broke every convention, every code of its time.

But the incomparable Lata number in Guide, for me, is ‘Moh se chalkiye jaaye, hai re hai hai dekho, saiyan beimaan’, the song of experience, doubt, a simmering question that wonders at the meaning of achievement. The chal, or betrayal, dances in Waheeda Rehman’s eyes as she sings herway out of a second trap, the snare of success laden with the bait of Raju’s desire for the appurtenances of wealth. There is no voice in the universe which could have brought that chal to life as Lata’s did, and perhaps no pair of eyes but Waheeda’s which could have conveyed the ebb of trust in the man she loved.

These songs will live as long as music does, or at least as long as YouTube. Rafi was certainly the most versatile, traipsing across vastly different heroes. He became the voice of Shammi Kapoor, as distant as one could be from Dilip Kumar. Dharmendra’s finest song was a gem from the Rafi oeuvre: ‘Aapke haseen rukh pey aaj naya nor hai, mera dil machal gaya toh mera kya qasoor hai’. It is debatable if Joy Mukherjee’s films, whether Love in Simla, Ek Musafir Ek Hasina, Phir Wohi Dil Laya Hoon or Shagird would have succeeded without Rafi—and, inevitably, Lata. But while Rafi and Mukesh identified with stars, Lata became her own superstar.

A pause for a caveat. I have not offered any English translation for these verses, for a good reason: the nuances of such poetry are difficult to embrace into the culture of the English language. How does one transliterate a line like ‘Kisi key manaaney mein lazzat jo aayi ki phir rooth jaaney ko ji chahtahai?’ ‘Lazzat’ has more connotations than the comparatively insipid ‘taste’, and ‘rooth’ is certainly not ‘sulk’. Try this as translation: ‘I have so enjoyed being persuaded that I want to sulk again.’ Mundane. Let’s leave the lyrics as they are.

We owe two of the three best dance numbers in Hindi cinema (apart from Guide) to Lata. Asha Bhosle takes the honours in Sahib Bibi aur Ghulam with the flawless ‘Saaqiya aaj mujhey neend nahin aayegi, suna hai teri mehfil mein ratjagga hai/Aankhon aankhon mein yun hi raat guzar jayegi, suna hai teri mehfil mein rat jagga hai’. It was not merely a night that passed in the pleasures of nautch, but an era of Bengal’s zemindars. But Lata is super in the splendidly choreographed ‘Honton mein aisi baat zubaan pey chali aai’ in Jewel Thief, and superlative in ‘Daiya re daiya dekho re paapi bichua’ from Madhumati. ‘Honton’ takes over seven minutes of screen time and ‘Daiya’ nearly six minutes. Lata Mangeshkar dominated in three of the finest films made in Bollywood: Bimal Roy’s Madhumati, Dev Anand’s Guide and K Asif’s Mughal-e-Azam. The music directors were Salil Chowdhury, SD Burman and Naushad. You could add Pakeezah, another Lata album, but the film was as tawdry as the music was silken. I would have included the old Nagin, but there again the quality of the movie is variable. Lata in Madhumati is an endless delight: in addition to ‘Daiya re Daiya’, there is ‘Zulmi sangh ankh ladhirey/Aaja re pardesi main to kab se khadi is paar’, and ‘Ghadi Ghadi Mera Dil Dharkey’. Vyjayanthimala was one of the great dancers of her era, and she surpasses herself in ‘Bichua’, capturing the essence of tribal artistry, beat and creativity with grace and swerve. In Mughal-e-Azam Lata was not Madhubala but Anarkali, her voice echoing the pain of a qaneez who dared to love a prince and an heir to a mighty throne. If her elegy stirred the heart, her qawwali enthralled the senses: ‘Teri mehfil mein qismat aazmanke ham bhi dekhenge/Tere qadmon pe sar apna jhukakar ham bhi dekhenge’. But the reward for such a gamble was death. Anarkali met her fate with wistful defiance: ‘Na ho khooney jigar to ashq peeney ka maza kya hai?’ She held her head high as her drugged lover lay prostrate on the carpet and executioners began the slow march to the grave: ‘Khuda nigehban ho tumhara, dhadaktey dil ka payam le lo/Tumhari duniya se jaa rahe ho, utho hamara salaam le lo…/Uthey janaza jo kal hamara, qasam hai tumko, na dena kandha /Na ho muhabbat hamari ruswa, yeh aansuon ka payam le lo’. Such music should be part of compulsory education. Music is a universal language. Lata Mangeshkar, a disciple and devotee of Indian ragas, loved listening to Beethoven and the Beatles as well. Every emotion across the human spectrum was reflected in her range. Some people wonder at the fact that she brought the national mood of 1963 to life with ‘Aye Mere Watan ke Logon’ without as much as a rehearsal.

Lata Mangeshkar’s soul did not need rehearsals. Listen to ‘Aye Mere Watan’ in the silence of solitude, and you will break down as everyone else has done at some point or the other. There is a photograph of the young Meena Kumari, then perhaps no more than 20, staring with undisguised awe at Lata Mangeshkar recording in a studio: that was the homage of a great actress to a genius. Time is relentless. Madhubala died at the age of 36; Meena Kumari left at 38; Nargis at 51; Nutan at 54; Sadhana at 76. No one knows when the call will come. Life and death have no logic: ‘Yeh chiraagh bujh rahey hain, mere saath jaltey jaltey’. We are blessed that Lata Mangeshkar was with us till the age of 92. Ghuzra hua zamana aata nahin dobara, hafiz Khuda tumhara.

MJ Akbar is a member of Rajya Sabha and the author of several books, including Doolally Sahib and the Black Zamindar: Racism and Revenge in the British Raj