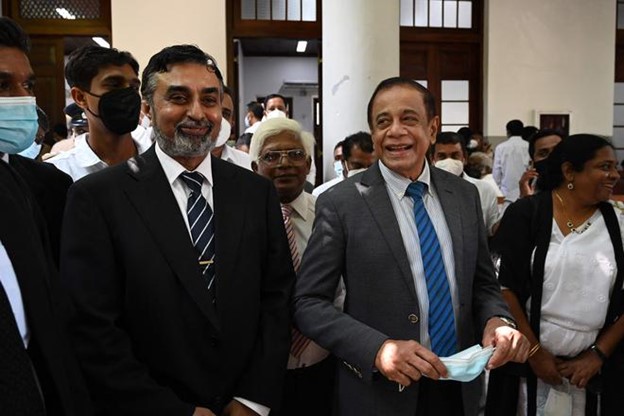 A daunting date faces Sri Lanka, writes  Neville de Silva,with the next meeting of the UNHRC heralding a report on the country’s progress, or lack thereof, in meeting prior recommendations

As I write this a besieged Ukraine awaits, wondering anxiously whether war will engulf it soon or not.

Elsewhere, Sri Lanka has no such doubts as it prepares to face a barrage of criticism in Geneva from the UN Human Rights Commissioner and a ‘core group’ of nations led by the UK demanding, among other things, that Sri Lanka abolish some of its reprehensible laws or amend them drastically to fall in line with international conventions.

The assassination of Julius Caesar in the Roman senate on 15 March 44 BC led Shakespeare, many centuries later, to name that date as the Ides of March, now indelibly etchedin history as a harbinger of misfortune.

To Sri Lanka, however, ‘ides’ is any day of adversity in March when the UN Human Rights Council (UNHRC) will subject it to severe strictures, as is bound to happen, just as in the past several years, when the country’s human rights record, alleged abuses of international humanitarian laws and other suspected failings come under sharp scrutiny and verbal flak.

The basis for this clash of wills and words on March 3, called the ‘interactive dialogue’(in UN parlance) by the 47-member UNHRC, is a 17-page report on Sri Lanka by the UN Human Rights Commissioner Michelle Bachelet.

It emerged from a resolution adopted in February last year titled ‘Promoting reconciliation, accountability and human rights in Sri Lanka’, which the Council passed one month later in March with 22 member-states voting in favour, 11 against and 14 abstentions.

This resolution set in motion several processes, including a call for High Commissioner Bachelet to submit a report to the Council’s 49th session which opened in Geneva on 28 February, updating the Council on Colombo’s progress, if any, in implementing the recommendations of last year’s resolution.

Sri Lanka is well aware of the direction of the impending attack because of what multiple sources regard as its lexicon of excuses. Recently, the High Commissioner forwarded, through the UN, her report to the Sri Lanka government, which will be formally presented to the 3 March Council session.

The PTA has been used for purposes other than countering terrorism

Given time to respond to the criticisms made, Sri Lanka did so and submitted its response to the High Commissioner’s office ahead of the deadline.

But in between there were developments that would surely figure in the debate and would reflect badly on Sri Lanka, however much it tried to dummy its way in its reply for not acting expeditiously to meet the calls of the Council, and using the Covid pandemic as a reason for not being able to meet its obligations.

In mid-February, a three-judge panel of a High Court Trial-at-Bar acquitted the then police chief and the secretary of the defence ministry, who had been in custody for four months and later released on bail, of ‘crimes against humanity’ and murder, for failing to prevent the 2019 Easter Sunday suicide attacks by Islamic jihadists on churches and three luxury hotels in Colombo, which killed some 280 worshippers, foreigners and locals.

The episode appeared bizarre when the judicial bench unanimously threw out the 855 charges levelled against the two men by the then attorney general, none of which had been proved – thus raising more questions about the country’s justice system.

Interestingly, Michelle Bachelet veers away from the general line of criticism regarding Sri Lanka’s lax conduct in observing international human rights standards, accountability, transparency and transitional justice. Instead, she turns her fire on the attorney general stating that the country’s chief law officer should act independently.

The head of Sri Lanka’s Catholic church, Malcolm Cardinal Ranjith, has been urging the government to conduct an independent inquiry and calling for justice for the victims. Disillusioned by the government’s apparent tardiness, Cardinal Ranjit has sought the support of the Vatican to demand an international inquiry into what is suspected to be a conspiracy that involves politicians.

Cardinal Ranjith is expected to meet the Pope and also be in Geneva during the UNHRC sessions, possibly to rachet up support for an international inquiry.

The Cardinal’s campaign gained traction when the then chief of the Police Criminal Investigation Department, now on bail, filed a Fundamental Rights affidavit in the Supreme Court recently, calling on the judiciary to prevent the government from arresting him using the dreaded Prevention of Terrorism Act (PTA), one of the principal issues against Sri Lanka in last year’s UNHRC resolution and in High Commissioner Bachelet’s latest report.

This is one issue that Colombo would find difficult to defend, particularly when the pressure for the Act’s abolition comes both internationally and locally, including from Sri Lanka’s Human Rights Commission, headed by a former Supreme Court judge.

One major problem is that the PTA has been used for purposes other than countering terrorism, as it was originally intended to do when adopted temporarily in 1979. The former CID chief claims in his petition that military and civilian officials in Sri Lanka’s intelligence services blocked his investigations into the Muslim political groups involved in the Easter Sunday suicide attacks.

The implication is clear enough. The chief argues that, had the CID investigations been permitted to go ahead without obstruction, the Easter attacks might have been prevented. It buttresses Cardinal Ranjith’s contention that there is more to those suicide attacks than is allowed to meet the public eye.

There is no resolution to vote on at this session. But that does not mean Sri Lanka gets away unscathed. Of immediate concern is not so much what happens in Geneva but what will happen thereafter in nearby Brussels.

Member states of the European Union which are in the Sri Lanka ‘core group’ and in the UNHRC will be keen to know what defence Foreign Minister GL Peiris and Justice Minister Mohamed Ali Sabry will present in defence of Colombo’s largely inconsequential amendments, compared to the far more obnoxious and vexatious provisions left untouched in the amendment Bill tabled in parliament.

At the February meeting of the EU-Sri Lanka Joint Commission, Brussels expressed serious concern that ‘important elements’ are missing from the PTA amendments and urged Colombo to reduce employing the PTA and take necessary steps to make the law ‘fully compliant’ with international norms.

Last June the European parliament passed a motion demanding that the PTA be scrapped as it ‘breached human rights, democracy and the rule of law’, and asked the EU commission to consider temporarily withdrawing Sri Lanka’s access to the GSP+ trade concessions.

If EU members are unconvinced, as some appear to be right now, that Colombo’s changes to the PTA are nothing more than window dressing to try appeasing critics and tide over the current Geneva session, the parliament in Strasbourg may well demand that the EU Commission suspend Sri Lanka’s GSP+ concession as it did in 2017.

A critical requirement to qualify for these trade concessions is commitment to human rights and workers’ rights, set out in 27 international conventions.

With Sri Lanka’s economy now in tatters and struggling to find the foreign currency for imports of food, fuel and medicine,the loss of the crucial European market would be a bitter blow, difficult to withstand.

It could well mean turning to the IMF for support, despite the opposition of some in the Gotabaya Rajapaksa cabinet.

This could happen before the next UNHRC session in September, when another resolution on Sri Lanka seems to be on the cards.