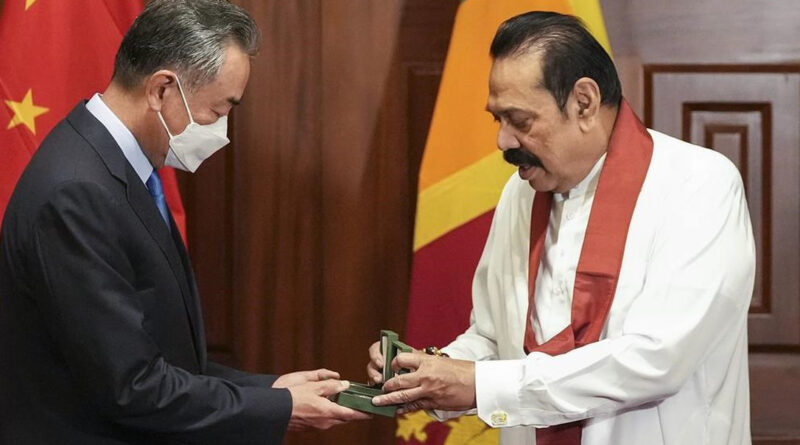 Sri Lanka appears to have seen through China’s infamous debt-trap diplomacy and, in a course correction, is now seeking to integrate its economy with good old neighbour India.

For its part, India, which has a geographical advantage over China, is reaching out to its smaller ally to counter the Asian Dragon.

Over the past years, liberal loans from China have flowed into Sri Lanka, creating mega infrastructure projects which helped Beijing gain a foothold in the key Indian Ocean region. Colombo welcomed the Chinese funds with open arms in the hope of shoring up its economy, but within the island nation, questions were already being raised over Beijing’s role as a development partner, since no jobs were created for local people.

Questions emerged over Beijing’s role as a development partner, since no jobs were created for locals

Member of Parliament Wijeydasa Rajapakshe accused China of economic invasion, corruption and debt-trap diplomacy, even writing to President Xi Jinping over the issue.

Now, there has been a marked shift in the stance of the Rajapaksa government, which has traditionally been soft towards China.

The disquiet in Sri Lanka is closely linked to its economy, which has gone from bad to worse over the past few years. The pandemic hammered the island nation’s tourism sector, the key foreign exchange earner, and pushed the government into a state of crisis.

Then, in September last year, the economy was further hit when excessive printing of currency notes decreased the value of the Sri Lankan rupee, leading to a rise in the price of food items and creating an energy crisis.

By the end of November, the foreign exchange reserves were reduced to $1.5 billion, barely enough to meet the country’s import bill for 30 days.

At a time when the Rajapaksa government was struggling to boost a sagging economy, it was forced to bar a consignment of 20,000 tons of cheap quality organic fertilisers from China, further compounding the foreign exchange crisis.

Enter India, which quickly helped Sri Lanka with 1 lakh kg of Nitrogen based fertiliser to deal with the situation.

Besides fertilisers, Sri Lanka depends on imports for automobiles, cosmetics and milk powder. It has an external debt of around $4.5 billion this year, including $3.5 billion to China, which has emerged as its largest bilateral lender after the Asian Development Bank and Japan.

The island nation’s precarious financial condition prompted international credit rating agencies like Fitch and Standard and Poor to warn that the Rajapaksa government was about to default on its debt repayments.

However, Beijing remained notably silent over the issue. This forced Colombo to contact New Delhi, which moved in quickly and offered a $900 million instant loan and a $1.5 billion line of credit.

Recently, New Delhi also bagged a contract to jointly redevelop around 75 oil tanks in Trincomalee and was able to stall a Chinese solar power project on three small islands off Jaffna coast.

This competitive game between Beijing and New Delhi actually started decades ago when China, which viewed India as a challenger in Asia, started reaching out to smaller South Asian nations including Sri Lanka, Nepal, Bhutan and Bangladesh to counter India’s influence in the region.

Sri Lanka walked into the debt trap as it tried to fast track its development with the help of liberal Chinese funds, little realising that the Asian Dragon’s generosity came with a hidden cost.

Over the past ten years, Colombo has received $5 billion from Beijing to boost infrastructure such as ports, airports and roads. In 2005, Colombo also became a key partner of China’s ambitious Belt and Road Initiative, which aims to connect Beijing with the rest of the world.

A key BRI project, the Hambantota port in the southern part of the country, funded and built by state-owned China Harbour Engineering Company, came up in 2012. The port soon became unviable and turned into a debt burden for Sri Lanka.

Unable to repay the loan, in 2017then Prime Minister Ranil Wickremesinghe was forced to hand over the port and 15,000 acres of land around it to private firm China Merchants on a 99-year lease for $1.1 billion. The acquisition allowed China control over strategic territory which lies on the main shipping routes between Asia and Europe and is only a few hundred kilometres from India. Much to New Delhi’s dismay, Chinese submarines have since docked at the port.

Mahinda Rajapaksa, who opposed the 99-year lease for Hambantota port, later took loans from China for projects in his home town during his ten-year tenure as President.

The other big BRI project was the Colombo port city, cleared by the incumbent Rajapaksa government in early 2021.

Built on around 265 acres of reclaimed land, the Colombo port city enjoys extra concessions and oversight relaxations from the local municipal authorities. This project, too, gives strategic advantage to China and takes it closer to India, and it has sparked fear among the locals that it may turn into a Chinese colony.

Not only that, Sri Lanka scrapped the Colombo Port East Container Terminal project, which was going to the joint India-Japan consortium, under China’s influence.

Adjoining the ECT, China holds an 85 percent stake in the Colombo International Container Terminal, which is under a 35-year build, operate, transfer agreement with the Sri Lankan Port Authority.

Later, India was given the Colombo Port West Container Terminal project as compensation but it was a private deal, unlike the government-to-government contract with China.

The US, which termed the BRI as a debt-trap for smaller and poor nations, also offered Colombo aid worth $400 million under the Millennium Challenge Compensation, to counter China’s growing influence in the Indian Ocean region.

China plans to set up a forum to develop Indian Ocean nations such as Comoros, Madagascar, the Maldives, Mauritius, the Seychelles and Sri Lanka to further expand its presence in the region.

However, Sri Lanka’s renewed strategy has rattled Beijing, which has warned the island nation not to let any ‘third party’ interfere in the bilateral relationship.

The good thing is that Colombo has ignored the veiled threat and committed to work even more closely with New Delhi.