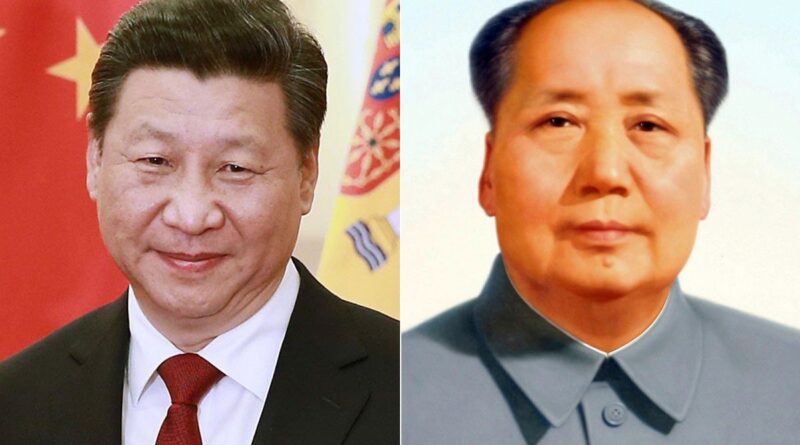 Amid domestic discontent and a complex power struggle within the CCP, Yvonne Gill ponders the Chinese leader’s chances of survival in 2022

Unlike constitutional democracies, the power struggles within communist regimes are perennial. In Joseph Stalin’s USSR and during Chairman Mao’s multiple ‘revolutions’, power was retained through brutal purges, mass killings and all-out repression. As a result, most communist regimes in the 20th century rose and collapsed under the weight of a permanently feuding ruling class.

Communist China remains one of the giants that successfully continues to deny political freedom to its 1.4 billion people, yet the country, under a one-party dictatorship, has grown stronger and more prosperous over the years.

The Chinese ruling class has perfected the art of bureaucratic governance, systematic purges and a sort of coexistence of different factions. The CCP has been able to smoothly effect changes of leadership at different levels, though its benevolent dictatorship often turns brutal when dealing with the citizenry and lower levels of the party. For the CCP, which abhors what it terms ‘Western-style’ democracy, is not accountable to the people who, it firmly believes, have to be shepherded, lest they go astray and plunge society into chaos.

Nevertheless, the top echelons of the leadership are constantly locked in a power struggle. Everyone there is angling to grab more power or struggling to retain it. And the most precarious position is that of the man in the helm. As various factions and power centres jostle for dominance, the outcome depends on whether the top man is able to appease or coerce the warring sides and survive the inner-party bedlam.

Not surprisingly, Xi Jinping – who has served as General Secretary of the Chinese Communist Party and Chairman of the Central Military Commission since 2012, and President of the People’s Republic of China since 2013 – has been skilfully riding a hydra-headed dragon. But now the apparatchiks are threatening to cut short his ambition of becoming leader-for-life, and the political uncertainty he faces at home has prevented him from travelling abroad for more than 700 days now.

Xi was elected President by the 12thNational People’s Congress in 2013. His second term was ratified by the 13th Congress in October 2017. He was to retire in 2022 because the constitution framed by the leader of post-Mao economic reforms, Deng Xiaoping, imposes a two-term limit (ten years in total) on all posts, except the chair of the Central Military Commission, to curb the rise of personality cults – a Mao legacy. But Xi was able to push through an amendment to the constitution at the 6th Plenary Session of the 19th Central Committee of the Chinese Communist Party held last November, paving the way for him to continue as the supreme leader well beyond the two-term cap. But the fact that the National People’s Congress, scheduled for autumn 2022, has to ratify the amendment hangs like a Damocles’ sword over Xi’s political future.

Ideologically speaking, there are three major political factions in the CCP

The cult of Xi, promoted assiduously through his ‘thought’ – which generously speaks of ‘socialism with Chinese characteristics’ and the people as ‘the masters of the country’ – has a growing number of opponents within ruling circles. A 40,000-word article criticising Xi Jinping went viral on overseas Chinese blogs and then in mainland China, listing the failures of the regime, growing resistance against Xi’s leadership within the CCP, and widespread discontent among the people, who are suffering economic slowdown as well as food and energy shortages.

Titled Evaluate Xi Jinping Objectively and published in mid-January, the article was picked up and circulated by Taiwan’s state-run Central News Agency (CNA) on February 9, the Chinese New Year’s day. Soon the article went viral on the mainland and was widely shared, in spite of the write-up being repeatedly removed by censor bots trawling Chinese social media and blogs.

The piece, written under a pseudonym, derides the CCP’s vicious crackdown on ‘independent’ religions and beliefs, human rights abuses, its tight surveillance and control of the people, revision of children’s textbooks and history books, strengthening of state-run enterprises and suppression of the private sector. Also criticised were the squandering of the nation’s wealth on image-building abroad and the regime’s aggressive stance of picking quarrels with Western democracies.

‘At present, it’s difficult for him [Xi] to continue his rule. The year 2022 will be his biggest turning point,’ the author writes. ‘Even if he miraculously secures another term, he will face more difficulties and [will be a] complete failure before 2027 [the end of his probable third term].’

China is going through multi-dimensional crises: rising white- and blue-collar unemployment, collapse of the real estate and allied sectors, large public and individual indebtedness, increasing taxes and fees, and a growing number of loss-making enterprises. Covid-19 and the harsh anti-pandemic measures adopted by the regime have only hastened a crisis that has been brewing for the last several years.

The CCP’s internal squabbles are obvious if one scans the party journals and newspapers. Several articles published on January 27 by Beijing-based DW News, commemorating ‘the 30th Year of Deng Xiaoping’s South Tour’, bring to the fore the factional infighting.

After Mao’s death in September 1976, Deng became China’s de facto leader, defeating Mao’s chosen successor Hua Guofeng at the 3rd Plenary Session of the 11th Central Committee in December 1978. But he inherited a China that was a shambles. His far-reaching reforms, including opening up the economy, had negative as well as positive consequences. Corruption spread in the party and the bureaucracy. Discontent among the youth, who wanted greater freedom and an end to corruption, led to the 1989 Tiananmen Square protests, which were brutally crushed.

Deng suffered a setback, with stiff opposition to his reforms within the CCP, and strident demands for a return to a controlled, planned economy. In January 1992, the 88-year-old Deng, who had resigned from all posts, undertook a tour of southern China, visiting Guangzhou, Shenzhen and Zhuhai. At Shenzhen, a city in Guangdong Province bordering Hong Kong, he made a policy statement through the CCP’s newspapers in Hong Kong, reiterating his socialist market economy policies. He had, according to one DW News commentary, warned: ‘Whoever is against reform must step down.’ Jiang Zemin, then CCP general secretary, was backing anti-reform policies, butfell in line once the then-chairman of the powerful Central Military Commission, Yang Shangkun, decided to support Deng. Interestingly, the article names Jiang Zemin, Xi’s main rival, to make a point that he was opposed to Deng’s reforms.

Ideologically speaking, there are three major political factions in the CCP. Xi has been involved in a virtual balancing act, appeasing these groupings or pitting one against the other to stay in power. A powerful faction is that of business interests of family members of top CCP leaders who openly advocate Deng’s policies and are against Xi’s attempts to rein in large companies and greater state control. This faction is led by Zhu Rongji and Wen Jiabao, both former premiers of China.

Another faction comprises descendants of former prominent or influential leaders. Although supportive of Xi, they want a greater share in power. But Xi doesn’t trust anyone and, following Mao’s style, has been ruthless in purging even his own appointees. Wang Qishan, a member of the Politburo and secretary of the party’s highest anti-graft body during Xi’s first term, was elevated to Vice-President in 2013. But Wang fell from grace and was eased out of the Politburo in 2017. In January this year, Dong Hong, a close confidant of Wang Qishan, who still is a Vice President, was given a ‘death sentence with reprieve’.

The third faction, also known as the Shanghai faction, is led by 95-year-old Jiang Zemin, who was party General Secretary for more than 20 years. Under his rule, corruption became widespread in China among civil and military officials. No wonder Jiang is a powerful man.

While riding the CCP tiger, Xi cannot take on everyone at the same time. His attempt to get a resolution passed to go back on Deng’s policy of economic liberalisation failed to get the required support at the CCP’s 6th Plenary Session. Instead the Session acknowledged Deng’s political line which brought together the Deng supporters and the Jiang faction. Hence, the subtle attack in the article commemorating Deng’s Southern tour,  recalling that old man Jiang was opposed to Deng’s reforms and that he opportunistically changed his line only when the then chairman of the Military Commission backed Deng.

Moreover, aghast at not been able to push his anti-Deng stance, Xi, who has cleverly gained the support of the People’s Liberation Army (PLA) by appointing his favourites in high positions, issued a chilling warning at the Plenary Session that ‘cliques, gangs, and interest groups within the party will be resolutely investigated and punished’. He curtly added there would be ‘no mercy’ for CCP officials who put themselves before party unity. Notably, this warning and other key excerpts of his November speech were released six weeks after the session, as if threating CCP members who would be electing the delegates to the National People’s Congress to be held later this year.

Xi seems to have adopted a strategy to deal with his political opponents, one by one: first the Jiang supporters and then the proponents of the Deng line. But the discontent with his policies goes well beyond these factions.

Speaking at a symposium co-hosted by the China Institute of International Studies, a think tank under the Foreign Ministry, at the prestigious Diaoyutai State Guesthouse in Beijing last December, former Chinese ambassador to Washington, Cui Tiankai, lashed out at the country’s ‘wolf warrior’ diplomacy. He said that China ‘should not fight a war we are not prepared for, a war we are not sure of winning, a war of anger and attrition’. He added: ‘Every ounce of our people’s gains has been hard-won, and we must not allow them to be plundered by anyone or suffer losses due to our own carelessness, laziness, and incompetence.’

Directly attacking the aggressive foreign policy of Yang Jiechi, a member of the CCP’s Politburo, and Foreign Minister Wang Yi, he  remarked: ‘We need to be clearheaded and fully prepared to deal with the twists and turns of China-US relations and even the roller-coaster scenario in the future, and resolutely safeguard our sovereignty, security and development interests.’

Like a typical dictator, Xi is going about his all-out crackdown on corruption. Many of those disgraced are officials and party bosses he himself had appointed. The list includes Deputy Minister of the Chinese Ministry of Public Security Sun Lijun; Justice Minister Fu Zhenghua; and a vice chairman of the Tibet Autonomous Region government, Zhang Yongze. Party leaders like Guizhou Deputy Party Chief Wang Fuyu and Hangzhou party Chief Zhou Jiangyong have also been charged with corruption and arrested.

Others on the receiving end are business tycoons. Jack Ma, co-founder and executive chairman of Alibaba Group, Byte Dance’s Zhang Yiming, the creator of TikTok, and many other top officials of technology companies have been forced to step down. The billions of dollars earned by these companies is looked upon as a threat to the regime.

With so many enemies around, and growing discontent among the masses who cannot even voice their grievances, will Xi manage to suppress those opposed to him within the CCP and a billion and a quarter outside? That he and his cohorts don’t believe in democracy augurs ill for the Chinese people, who will ultimately suffer the turmoil their country goes through.