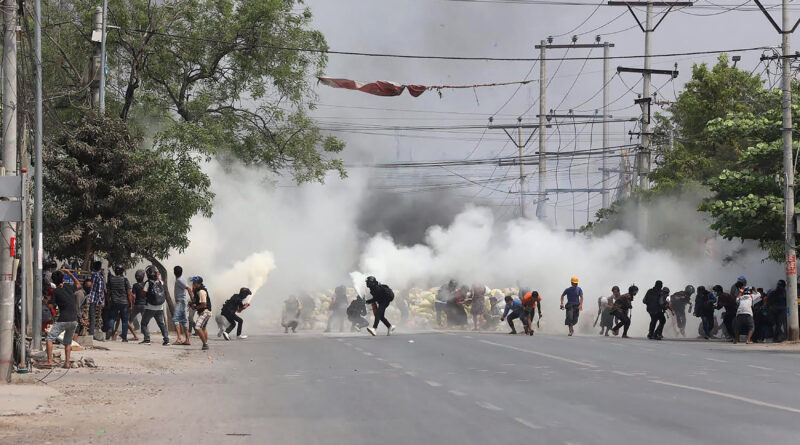 Sudha Ramachandran examines the targeting of civilians by anti-junta forces in Myanmar, interror attacks that will undermine the NUG’s chances of gaining international recognition

Fourteen months after the Myanmar military staged a coup to overthrow the elected National League for Democracy (NLD) government and capture power, it has not been able to consolidate its authority or quash the resistance. Indeed, swathes of territory in Myanmar are reportedly not under the junta’s control.

On the international front, while some governments are doing business with the generals, no country has extended recognition to the military regime. Nor has the National Unity Government (NUG), which was established by elected lawmakers and pro-democracy groups in April last year, secured recognition from any government.

For several months after the coup, civilians marched in protest against the coup. A civil disobedience movement followed.

The military launched a brutal crackdown on its opponents. Over the past year, the level of violence it has unleashed against civilians has escalated. While some of those targeted belong to armed groups fighting military rule, many are unarmed civilians. Countless incidents of the junta indulging in torture, summary executions and even massacres of civilians have been reported. On Christmas Eve last year, the military massacred 35 people, including four children, in Hpruso township in Kayah state. Charred remains of the victims indicated that they had been tied up, gagged and tortured, with some even burnt alive.

Unarmed civilians are being targeted by both sides

The junta has also used extreme force against its opponents, even deploying airpower to bombard entire villages.Not surprisingly, it is being accused of war crimes and crimes against humanity.

United  Nations officials said recently that they have ‘been able to identify a pattern over the past year, which indicates that this [the junta’s violence] is planned, coordinated, systemic attacks; that there are clear indications that they would amount to war crimes and crimes against humanity’.

However, the violence has also extended in another direction, with worrying signs that those resisting the junta are going down the perilous path taken by the generals, and increasingly targeting civilians.

As their non-violent protests fail to bring change, Myanmar’s youth have switched to armed struggle. Many went to the borderlands to access training from the ethnic armed organisations (EAOs).Spearheading the resistance to the junta is the National Unity Government, which in April last year announced the formation of People’s Defence Forces (PDFs) and in September declared a ‘people’s defensive war’ against the military regime.

An array of armed groups are now fighting the military. In addition to the battle-hardened EAOs, whose formation predates the 2021 coup, there are the PDFs which come under the NUG’s Ministry of Defence. There are also Local Defence Forces (LDFs), which are autonomous militias operating in the townships.

Pitted against the 350,000-strong Myanmar military are some 25,000 fighters of the EAOs and another 25,000 fighters that belong to PDFs and LDFs.  While the anti-junta forces were initially fighting the military with home-made weapons, they seem to have now acquired more advanced weaponry, including machine guns and RPG launchers, albeit in limited amounts. Still, they remain at a distinct disadvantage, especially in dealing with the junta’s airpower.

As the fight between the military and the resistance groups grows in ferocity, unarmed civilians are being targeted by both sides. PDFs are attacking civilians, whom they deem to be collaborators with the junta. This includes civilians who didn’t participate in the civil disobedience movement, local administrators and officials, and retired military personnel. Local officials employed by government-run electricity companies to collect payment for bills have also been targeted, as have family members of government employees. All these are either targets or treated as collateral damage. On October 29, a village administrator and his family were attacked by the Pakokku PDF; although he managed to escape, his wife and father were killed. Most of these attacks are carried out via bombings on targets’ residences and workplaces. PDFs have targeted COVID vaccination sites, bridges, schools and fire stations. On December 31, a PDF unit reportedly carried out a bomb attack near Myanmar’s embassy in Phnom Penh in the run-up to Cambodian Prime Minister Hun Sen’s visit to Naypyidaw.

Alarmingly, the NUG is neither condemning attacks on civilian targets nor reining in the PDFs. Soon after October’s strike on the village administrator, the Pakokku PDF issued a statement that accused him of collaborating with the military regime. It warned other collaborators of a similar fate if they continued to work for the regime. Yet the NUG did not denounce the attack, nor has it done so in dozens of cases where PDFs have assassinated regime-affiliated, unarmed civilians.

Several reasons lie behind the NUG’s reluctance or failure to rein in the PDF attacks on civilians. One is that its ties with the PDFs are largely nominal. It wields little control over them. The NUG and several PDFs may share aspirations of a democratic Myanmar but beyond that, the groups do not all accept the NUG’s command. While the NUG did put in place a command structure,it lacks the capability to oversee or monitor the actions of individual PDFs. The NUG is in a position to co-ordinate the actions of various PDFs in a joint operation against the military, but in the case of smaller attacks such supervision is not possible, as Benjamin Mok pointed out in an article in The Diplomat. Additionally, the NUG’s guidelines to the PDFs are vague, he writes.

This weakness on the part of the NUG could cost it in the long run. Although the PDFs efficacy on the battlefield is growing and the NUG has enormous sympathy and support among the international community, this has not translated into recognition from even a single government. The increasingly vicious attacks on civilians by PDFs could irrevocably damage the NUG’s image. The NUG is right in claiming to be the legitimate elected government of Myanmar. But its claims to providing people-friendly governance will ring hollow if unarmed civilians continue to be killed or dismissed as mere collateral damage in the increasingly brutal war against the junta.