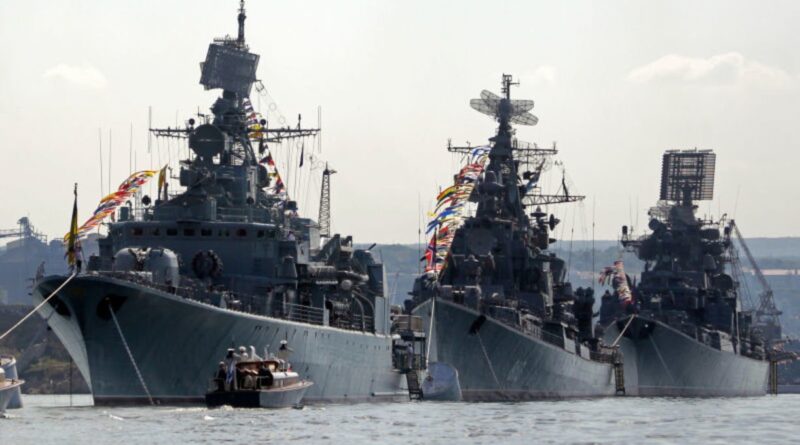 Is this the beginning of a new world order?

In the build-up to the current crisis, MJ Akbar argues that America sought the impossible, Russia the unattainable

The sunset of Kabul has slipped into the twilight of Kyiv and the American era will fade into darkness if Washington crumbles before its next great challenge: a confrontation with China over Taiwan. Just three decades ago, in 1990, after victory in the Cold War, Washington and its cheerleaders were confident that Pax Americana would hold as much sway over the 21st century as it had over the 20th. But by 2005 America had lost its way in Iraq and never found one in Syria, leaving space which Vladimir Putin quickly filled. In 2014, Barack Obama responded with weak indifference when Putin tested the waters of Europe by occupying Crimea, home of Russia’s Black Sea Fleet, anchored at Sevastopol. Having established the new normal in Ukraine, Putin waited while his diplomats made appropriate declamations over the advance of NATO to the borders of Russia. In August 2021, he watched America literally flee from Afghanistan when even a perfunctory stand would have interrupted the Taliban advance. Putin chose his moment.

On the night of Thursday February 24, Ukraine’s young President Volodymyr Zelenskyy asked, plaintively, why he had been abandoned by the West. A few days of war taught Zelenskyy more than he had learnt during a lifetime of peace. Ukraine was not abandoned when the Russian invasion began on three fronts in February. America abandoned Ukraine in the first week of December 2021, when its response to Russian mobilisation was nothing more than the threat of sanctions. President Joe Biden, like Barack Obama, sought creative language to disguise retreat.

Vladimir Putin is only as strong as Joe Biden is weak.

The fatal flaw in American strategy after the searing punishment it suffered in Iraq is the curious belief that it can preserve strategic space without boots on the ground. Putin’s favourite quotation, it is believed, is a line from Lenin: ‘Probe with the bayonet – if you find mush, keep on probing.’ It is evident that the message Putin received from his bayonet was that the White House was now occupied by men of straw. The Russian leader must have been amused when Biden sent his prayers to Ukraine after Putin sent his troops.

Putin enjoys judo and plays chess. A kick makes its point but does not necessarily land a decisive blow. Chess is more complex: it teaches a player the vital difference between reach and overreach. The gulf in between can become a septic swamp. We will soon learn whether, in addition to Lenin, Putin has read the German philosopher-poet Johann Wolfgang von Goethe, who wrote that wisdom lies in knowing when to stop.

In retrospect, both America and Russia, who have held the two ends of a bipolar world since 1945, became unhinged – albeit in different ways – after the collapse of the Soviet Union: neither was able to manage the consequences. Both now seem exhausted, bleeding from their own ambitions and miscalculations.

Such was the American euphoria in the 1990s that Washington lapsed into what might be called the Fukuyama Madness: history itself had come to an end with the fall of Soviet communism to the Pentagon-Wall Street-White House trident of liberalism. There were no more worlds left to conquer. Society had found perfection in the American model of governance and the spirit of its constitution. Francis Fukuyama, a professor at Stanford, wrote a much bought book titled The End of History and the Last Man. The White House waved with Caesarean élan, and forgot an elementary lesson: an adversary is vanquished not when it is defeated, but when it accepts defeat. Russia found Vladimir Putin, who would not accept defeat, even when all around him lay nothing but the debris of a once-powerful idea.

Vladimir Putin is only as strong as Joe Biden is weak

America sought the impossible, Russia the unattainable. Washington could never become the permanent guardian, guarantor, governor, philosopher and global policeman of the 21st century. Putin wanted the virtual return of the Soviet Union’s zone of influence. That was impossible, not because of American obstruction but because the zone had changed in a very fundamental sense. The nations of the old Soviet Union had discovered the meaning of independence. After Ukraine, America’s allies are finding out the limits of their dependence.

The crisis in Ukraine could initiate the restructuring of the present world order, for both the pillars of the 20th century have been undermined.

The biggest casualty of the Ukraine war has been trust in Washington. America’s allies have got the message. If a crisis arrives with the speed and strength of a hurricane, Joe Biden, hiding behind the porous veil of ‘strategic ambiguity’, will rush out statements rather than missiles. The mighty Pentagon is now a bald Samson put out to pasture. Samson’s story never ends well for the house, which comes crashing down in the final scene. It remains for those who have taken shelter in that house to rebuild the structure. They have no other option.

The first world leader to sound an unambiguous alarm was Japan’s longest-serving Prime Minister Shinzo Abe, who left office after eight years because of ill health. In the middle of the battle for Kyiv, Abe told Washington through a television interview to abandon ‘strategic ambiguity’ over Taiwan and make a formal commitment to defend the island territory in case China invaded. He had more to suggest.

Abe added that Japan, the only country to suffer the horrific devastation of atomic bombs, must abandon nuclear pacifism and move towards ‘nuclear sharing’, becoming part of some arrangement on the lines of NATO, which permitted the presence of nuclear weapons on Japanese territory. His exact words were: ‘Japan is a signatory to the Nuclear Non-Proliferation Treaty and has its three non-nuclear principles, but it should not treat as taboo discussions on the reality of how the world is kept safe.’ Japan’s security could no longer be outsourced to America. It needed its own finger on a nuclear button.

Shinzo Abe’s prescription marks nothing less than the end of the Non-Proliferation Treaty (NPT) regime, which India never signed because it was arbitrary and discriminatory. Japan, incidentally, has sufficient fissile plutonium and expertise in rocket technology to build a nuclear arsenal within a year.

Japan and Germany could take the diplomatic lead in developing a new consensus across the vacuum left by America and Russia, in cooperation with democracies like France and India. This will be a long process which must, at some point soon, revisit the now hollow shell of the United Nations (UN). They will certainly revitalise UN reform, always at the top of the diplomatic agenda of India, Germany and Japan. The present Security Council has long outlived its utility and become nothing more persuasive than a split lectern. Transition is a curious process: nothing happens and then suddenly everything happens.

This is a historic and perhaps ironic reversal, for Germany and Japan were smashed to smithereens by the American-Russian-Chinese alliance in World War II. Experience has taught Germany and Japan that fascism is suicidal, and domination is dead; the 21st century must see a shared world inching as best as it can, and perhaps only where it can, towards a liberal, democratic horizon. India will become a significant part of the new architecture for stability, for it is a democratic state with a liberal Constitution and a proven ability to defend its borders and preserve its values.

Order needs the protection of armour. Shinzo Abe was explicit; Germany prefers discretion, but Germany will militarise again after a long phase of strategic naïveté, which reached its apex under Chancellor Angela Merkel who ruled Germany for 16 years with a steely eye and a plastic fist. Her axe targeted the defence budget each time there was a financial crisis. The cuts were never restored.

The present chief of the German army, Alfons Mais, could not contain his frustration after the invasion of Ukraine, saying ‘The Bundeswehr, the army I’m privileged to lead, is more or less empty-handed. The options we can offer in support of the alliance (NATO) are extremely limited.’ He added for good measure: ‘I’m p****d off!’ He can now look forward to better times. As markets crashed when the fighting began, shares of BAESystems, builder of fighter jets and sophisticated weaponry, rose by 10 per cent. The true heavy lifters in the international defence bazaar will already be busy in board meetings. The market knows what it is doing.

Britain tries to cloak its weakness with bluster, but one fact will reveal the brittle truth: it has probably only about 200 battle-ready tanks left. It could not send enough mines to Ukraine because it did not have that many. Europe will wake up from its long post-1945 coma, induced by a palliative called the American security umbrella. Putin has ensured that defence budgets will rise across Europe. Having rebuilt its war-ravaged economy, the European Union will now have to build the force needed to protect its achievements.

Russia will have to recalibrate its options, adjusting them against reality. It will probably get the commitment it seeks from Kyiv on NATO but its adventurism will have a debilitating effect on its long-term goals. Moscow is not too worried about sanctions, since neither America nor Europe is ready to turn off the gas taps. The rise of oil prices from $65 per barrel last December to over $110 at the time of writing means that Russia has nearly doubled its daily profit. Moreover, we tend to forget that Russia is capable of an economic response. It has the largest reserves of C4F6 gas, is the world’s biggest producer of titanium from the ‘Titanium Valley’ in western Siberia, and has a preponderant share of palladium reserves (palladium is used for sensors and computer memory). Putin knows that in 2018, the West brought sanctions against Russia’s largest producer of aluminium with much fanfare and quietly dropped them when the price of the metal rose.

All through his career in Russian intelligence between 1975 and 1991, Putin had dealt with the West. The war was a serious miscalculation, but he knows that it will wind down because America and Europe are not ready to fight for Ukraine the way they will for NATO members. Moreover, there are sages in the American establishment like Henry Kissinger who understand Moscow’s concerns vis-à-vis Ukraine. But Putin will also realise that events have now escaped his reach.

If the outcome of every war went only along intended lines, history would be a different story. World War I began as a contest for Europe and ended in the collapse of three empires that had controlled Eurasia for six centuries. World War II began as another conflict between familiar belligerents but finished by dismantling colonialism in both the West and the East, making way for two new superpowers led by Washington and Moscow. Ukraine will not start a world war, but it has triggered worldwide ramifications.

As the world swerves again, optimists can always invest in hope.

MJ Akbar is a member of Rajya Sabha and the author of several books, including Doolally Sahib and The Black Zamindar: Racism and Revenge in the British Raj