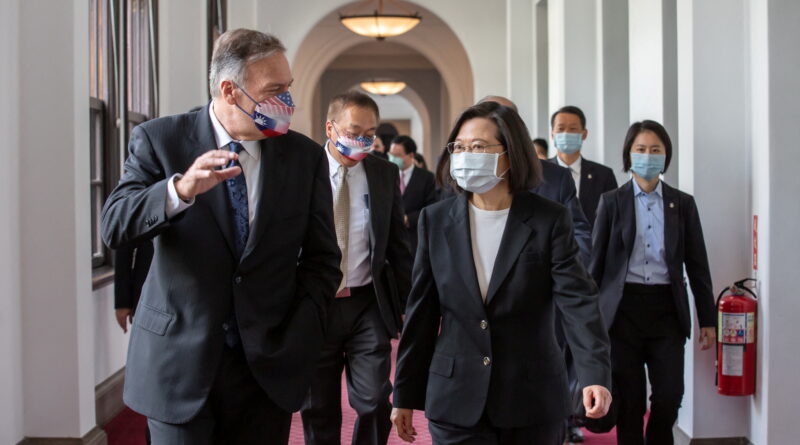 China’s mixed messages on the Ukraine war have revealed contradictions in its foreign policy. Liam Gibson in Taiwan explores the implications for Asia

The war in Ukraine has shaken Chinese foreign policy to its core. Responses from the national leaders have been a curious form of double-speak. They have avoided condemning Vladmir Putin, while also talking about the importance of respecting Ukrainian’s sovereignty as an independent nation. The word ‘invasion’ has been studiously avoided by Chinese politicians.

While the conflict suits some of China’s interests, at the same time it undermines them. China is determined to retain Russia as a strategic partner but also holds to a doctrine of ‘non-interference’ in the affairs of other countries. Zhao Lijian from the Chinese Foreign Ministry may try to frame the US as ‘the initiator of the crisis’ but China does not wish to see a war between Russia and America. Nor does it want relations to be ruined between China, the European Union and other democracies.

China is hugely influential on Russia, thereforemuch rests on China’s stance over this crisis, from the perceived legitimacy of Putin’s invasion to the impact of sanctions on Russia’s economy, to the peace process and eventual conclusion of the conflict.

The lessons that China draws from Russia’s debacle in Ukraine are also bound to shape how it approaches the situation with Taiwan. The US and its allies, as well as people in Taiwan itself, are scrutinising Beijing’s mixed messages in the hope of understanding China’s ambitions.

President Xi Jinping met Vladimir Putin during the Olympic Games in Beijing in February. Nevertheless, the invasion of Ukraine appeared to catch Xi off guard and China’s top leadership struggled to formulate a response. Politburo Standing Committee members made no public appearances for over a week, suggesting that they were involved in closed-door meetings discussing Ukraine.

Xi, like Putin, probably expected a quick and decisive campaign. Yet as the weeks rolled by, China’s wait-and-see approach became more fraught. As the casualties rose and refugees fled Ukraine, China came under intense diplomatic pressure to condemn Russia. Yet by mid-March, there was no sign it would do so.

‘Let’s not be naïve. Condemnation doesn’t solve the problem. We will continue to promote peace talks and urge for an immediate ceasefire,’ China’s Ambassador to the US, Qin Gang, told CBS News on March 21.

Meanwhile, China’s citizens offered their responses to the war through social media, where many of their angry comments were deleted by censors. People were forbidden from posting pro-Western or anti-Kremlin content. An open letter by prominent Chinese academics opposing the invasion was removed from social media.

On the Weibo platform, netizens’ reactions ran the gamut from calls for world peace to lewd jokes about Ukrainian female refugees, to memes by Chinese office workers, who complained the war made it hard to concentrate at work.

China’s businesses were also caught unprepared. Ride-sharing app Didi initially said it would exit Russia but did a sharp U-turn after coming under pressure from a nationalist influencer called Sima Nan for straying from Beijing’s official position.

Meanwhile, other nationalist netizens also used the opportunity to taunt Taiwan. They implied the island is the next place which will be invaded.

Such threats are being viewed seriously here in Taipei.

The Ukraine war has sharpened concerns about the country’s preparedness to repel a Chinese attack. The majority of people in Taiwan now favour women joining compulsory military training and live fire drills have been held on islands close to the Chinese coast.

In late February, the United States sent a delegation of former senior defence officials to Taiwan, led by one-time chairman of the Joint Chiefs of Staff, Mike Mullen. In a further show of support, a US destroyer cruised through the Taiwan Strait in an unmistakable signal that the US has not taken its eye off Taiwan amid the war in Ukraine.

A visit to Taiwan by former Trump administration Secretary of State Mike Pompeo produced much fanfare. Pompeo arrived in early March for a four-day visit, including a meeting with President Tsai Ing-wen. Pompeo slammed President Biden for being ‘too slow’ in arming Ukraine and said that the same mistake must not be made with Taiwan.

Nevertheless, the suggestion that Taiwan may be the next flashpoint in global conflict is being downplayed by both Taipei and Beijing. They both say the situation is different in Ukraine. Beijing insists its commitment to Ukraine’s sovereignty doesn’t contradict its right to use military force against Taiwan, since, in its eyes, the island is its territory. Meanwhile, Taipei has been busy reassuring the world that its unique economy and geography make it less vulnerable to an attack than Ukraine.

Even though both China and the US insist they want to see an end to the bloodshed in Ukraine, they have no common policy on how to do so.

America has repeatedly warned Beijing of the consequences of sustaining Putin’s war machine. For its part China has lashed out against the sanctions imposed on Russia, calling them illegal and immoral. Yet at the same time, Beijing has sought to distance itself from the war, arguing it is ‘not a party to the crisis’.

Chinese State media have fallen prey to Russian conspiracy theories about Washington financing biological weapons labs in Ukraine. The US has released intelligence reports that Moscow requested military equipment from China in the lead-up to the invasion. China dismissed these claims as ‘disinformation’.

The overtones are eerily similar to the finger-pointing that surrounded the origin of Covid-19 in Wuhan, another global event which splintered trust between the great powers.

China’s clumsy diplomacy has not helped its cause. It is easy to talk of ‘win-wins’ in peacetime when the stakes are low. However, it is a lot harder to be everyone’s friend and sit on the fence as autocracy and democracy do battle. While Biden has galvanised transatlantic unity, Xi has come across as out of touch and isolated.

China therefore needs to make meaningful contributions to ending the conflict, or risk being remembered as a co-conspirator of Putin’s crimes against the Ukrainian people.

Liam Gibson is a journalist based in Taiwan who regularly publishes in Al Jazeera, Nikkei Asia Review and other international outlets. He also works as a reporter at Taiwan News and runs Policy People, an online content platform for think tank experts