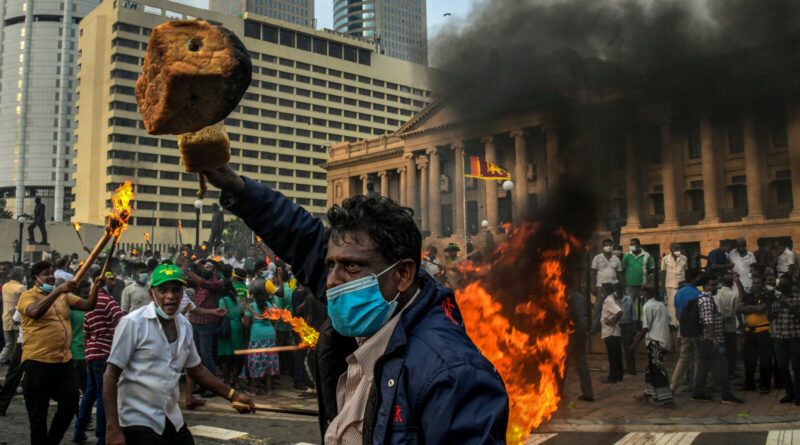 Rajapaksas on the ropes

With the economy in freefall and basics such as food and fuel in dangerously short supply, Neville de Silva charts the mounting public anger against a failing and desperate government

‘O tempora, O mores,’ said the Roman orator Cicero in a plaintive cry, denouncing the political and social norms of Rome in 70 BC.

Unlike the Romans, the people of Sri Lanka have not left it to politicians or orators to berate what they perceive as their rudderless rulers. They have taken on the task themselves, going into the streets to decry their government in words more telling and malignant than any Cicero might have employed.

They watch as their once ‘Resplendent Isle’ hurtles downhill while confused rulers try desperately to halt its economic and social collapse.

Never in the history of modern Sri Lanka have its citizens queued up for hours to purchase one or two cylinders of cooking gas or a few litres of petrol or kerosene, while a wide range of other shortages continue to plague the country.

If in Ukraine civilians are dying because of the indiscriminate and inconsiderate shelling and bombing by Russian forces, in Sri Lanka they are dying on their feet, some having waited for pre-dawn hours for gas or kerosene to cook what little food they could muster to feed hungry families.

As I write this in late March, reports are pouring in of four people from different parts of the country dying within 48 hours. That is not surprising at a time when the Covid pandemic still persists. But these four died while waiting in gas or petrol queues, three of then possibly of exhaustion after standing for many hours, and the fourth of stab wounds during an altercation at a filling station.

Today, history is being made. But it is not in the manner the country’s rulers –the powerful Rajapaksa family from Sri Lanka’s south, whose political antecedents go back to the 1930s–ever expected.

Today, the wheel of political fortune has inexorably turned

It was over a decade ago that two of the Rajapaksa brothers, Mahinda and Gotabaya, were hailed as national heroes for their roles in defeating the dreaded Tamil Tiger separatists in May 2009, after a war that lasted nearly three decades.

Mahinda was then Sri Lanka’s president and Gotabaya his defence secretary.

In April 2019, a couple of days after jihadist terrorists suicide-bombed three churches and three luxury hotels on Easter Sunday, killing some 270 locals and foreigners and wounding another 500, Gotabaya Rajapaksa announced his presidential ambitions.

In November that year he won the presidential election with 6.9 million votes and in August 2020 Mahinda Rajapaksa led the Sri Lanka People’s Party (SLPP) to victory at the parliamentary election with a near two-thirds majority.

But today, the wheel of political fortune has inexorably turned. Last month in a Gallup-style opinion poll conducted by a local think tank,Veritḗ Research found that only 10 per cent of those queried said they approved of the current government.

Such is public antipathy that long queues of people spending hours to buy a packet or two of powdered milk booed the president as he passed by.

Some days later busloads of women, led by a former MP whose politician father was shot dead by a rival, who was convicted of murder, sentenced to death but then pardoned by President Gotabaya last year and given a state job, demonstrated outside the president’s private residence.

Teachers, health workers and other trade union-led employees have gone on strike at various times. Farmers have taken to the streets, protesting against the overnight ban last May of chemical fertiliser that saw some rice fields and other agricultural land abandoned and export-earning tea and rubber plantations affected.

Over the past months effigies of the Agriculture Minister have been burnt and posters of the Rajapaksas (four of the brothers are cabinet ministers and so is Mahinda’s eldest son) have been torn or otherwise defaced in blatant displays of public anger and lack of faith in a government that has failed to provide uninterrupted supplies of basics such as electricity, gas, petrol and kerosene, and essential foods and medicines.

It has been said that even the dead have no peace. Some crematoriums have stopped functioning unless they can be certain of continuous electricity.

Outages lasting several hours have often brought factories to a halt. Thermal power stations and other power providers cannot operate continuously for lack of fuel and coal. Fast depleting foreign reserves have forced the government to slash imports of food, fuel, diesel and gas, compelling many restaurants, bakeries and wayside eateries, as well as other enterprises, to close or restrict their business.

Meanwhile, prices of food and domestic essentials and transport costs have skyrocketed, driving many families, particularly daily wage earners, into penury and starvation.

With foreign reserves at the end of February down to a perilous US$ 2.3 billion and some $7 billion in sovereign debt and loan repayments due this year – including a $1 billion repayment in July – the Rajapaksas turned from their traditional friend and ally China, which that has extended financial help over the years, to neighbouring nations.

New Delhi extended a $1 billion credit facility to enable the purchase of food, medicines and other essentials. This brought Indian assistance this year to $1.4 billion, which included a $400 million currency swap, besides another half a billion dollar line of credit for essential fuel imports, and the deferring of a $500 million loan and.

Meanwhile China is considering another $2.5 billion in fresh assistance, China’s ambassador to Sri Lanka stated while turning down the deferment of a loan.

Even as Sri Lanka turns to Asia’s two leading powers, both vying for larger footprints in Sri Lanka, with its strategic location in the Indian Ocean, Colombo has finally turned to the IMF for belated assistance due to internal dissension in the ruling coalition.

Some other state ministers have resigned or been removed as internal squabble begin to take a toll on stability in the 11-party coalition.

With the economy in tatters and mounting public wrath against President Gotabaya Rajapaksa, with calls of ‘Gota Go Home’, he summoned an all-party conference late last month in the hope of showing a friendly face and seeking solutions to the country’s economic catastrophe.

While some minority Tamil parties which had long sought a meeting with the president and some other parties attended, two of the leading opposition parties, which recently launched anti-government demonstrations, boycotted the conference.

It started on a sour note, with many-time prime minister Ranil Wickremesinghe putting the Governor of the Central Bank Nivard Cabraal in his place for unwanted political remarks, for which President Rajapaksa apologised to Mr Wickremesinghe.

To the average Sri Lankan who has witnessed such conferences over the years, including ones to bring racial peace to a divided country, they are an exercise in political waffling and time-wasting.

With Sri Lanka’s biggest national celebration, the Sinhala and Tamil New Year, in mid-April, the working and middle-class families now struggling to survive wonder whether there will be anything to celebrate. Even if families can get together for the traditional meals, will they be able to cook them for lack of gas and kerosene?

Will this April be the cruellest month?