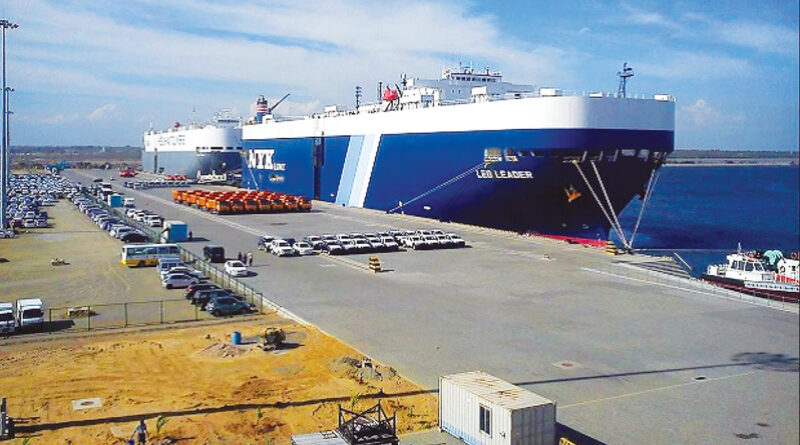 India’s neighbourhood is in turmoil. Close on the heels of the economic devastation wrought by the Covid pandemic, the Ukraine war and the unilateral sanctions imposed on Russia by the US-led NATO alliance have dealt a lethal blow to the fragile economies of Sri Lanka, Pakistan and Nepal, as with third world countries elsewhere.

The net impact is spiralling inflation across the globe and balance of payments crises for developing countries whose foreign exchange earnings had plummeted during the pandemic, and are now faced with high import costs.

The island nation of Sri Lanka, with its 22million-strong population, has been worst hit. Thousands of angry Sri Lankans have been on the streets since April 9 as prices of essential commodities skyrocketed owing to acute shortages in fuel, medicines and other essentials. With its foreign exchange (FE) coffers empty, ships loaded with petroleum products had to be turned away from the ports. Long hours of power cuts and runaway inflation following the sharp devaluation of the Sri Lankan rupee has made people’s lives miserable. A kilogram of rice is said to cost 500 Sri Lankan rupees and a 400 gm packet of milk powder 250 rupees – four times their usual cost. The army has been called in to quell the riots. One person has been killed and 13 injured so far.

India’s new policy is one of mutual respect and cooperation, not coercion

Traditionally friendly with India and favourably disposed to the West, Sri Lanka’s trouble started with the rise of Tamil extremism. Relations with India deteriorated because of Indian sympathies with Tamils, who are of Indian origin. Going back on the Norwegian-brokered peace deal, Mahinda Rajapaksa launched a massive military offensive in the final months of the civil war in 2009, laying brutal siege to the Tamil-speaking areas. Some 75,000 Tamil civilians were killed, according to the UN.

Political chauvinism fuelled by majoritarian Sinhala Buddhist nationalism and reliance on international commercial debt to fund public expenditure and freebies, and increased expenditure on the armed forces, have been the hallmark of Sri Lankan government policies. The Chinese saw an opportunity and began supplying weapons to the country. Beijing even vetoed any move in the Security Council to hold Sri Lanka responsible for war crimes committed against Tamil civilians during the civil war, and also started financing several infrastructure projects, the most prominent being the Hambantota Port in South Sri Lanka, home to the Rajapaksa family.

Mired in allegations of kickbacks taken by members of the Rajapaksa clan, the billion-dollar project was the beginning of Sri Lanka’s woes. As it was unable to meet repayment schedules, the port was given to a Chinese government company on a 99-year lease. More loans have been taken from the Chinese to buy 15,000 acres of land around the Hambantota Port to build factories and offices for Chinese enterprises. Although Chinese loans are only 10 per cent of the total official debts, the Chinese are known for hiding loans as trade credit, using special purpose vehicles. Moreover, unlike bilateral aid, the loans have interest rates as high as 3 to 6 per cent and a shorter term of eight to 10 years.

Sri Lanka’s trouble started with the rise of Tamil extremism

The severe dip in tourism, Sri Lanka’s important foreign exchange earner, during the pandemic, and lower exports had already depleted the country’s FE reserves. The recent global spike in prices of fuel and essentials, as well as the misconceived policy of ordering farmers to shift to organic farming in order to cut fertiliser imports – leading to a big decline in agricultural production – has, when added to the growing foreign debts, created a perfect economic storm. Sri Lanka has foreign currency reserves of around $2 billion, while the total debt repayment target in the year 2022 is $7 billion. Of this, $1 billion worth of bonds are maturing as early as July 2022, according to Bloomberg.

Another troubled country in India’s neighbourhood is Nepal. Heavily dependent on tourism and remittances from Nepalese working abroad for its foreign earnings, it suffered a severe erosion of earnings due to COVID. Then, just as the economy was getting back on track and Everest tourism was finally picking up, it was hit by rising prices of fuel and other essentials it imports in the wake of the Ukraine war.Taking pre-emptive measures, the government has put restrictions on imports of all non-essential items. The current foreign currency reserves can meet imports for only six months. Nepal’s debts stand at 41.4 per cent of GDP and inflation is at 7.14 per cent.

Nepal’s Forex reserves declined from $11.75 billion in mid-July 2021 to $9.75 billion in February this year. This is just enough to pay import bills for less than seven months.The country’s import bill rose 38.6 per cent to $10.8 billion in the first eight months of the financial year that started in mid-July.

Nepal, too, has signed agreements worth $2.4 billion with China for several infrastructure and energy projects. These include building a railway line through the Himalayas, linking the Tibetan border town of Kerung with Kathmandu. But the projects have made little progress.

During his Nepal visit on March 25-27, the Chinese foreign Minister Wang Yi expressed dismay at the slow progress of the Belt and Road Initiative (BRI) projects and warned Nepal about the external interference that threatened the core interests of Nepal and China. He was alluding to Nepal’s ratification of the American grant assistance of US$500 million under the Millennium Challenge Corporation (MCC) on 27 February 2022.

In fact the Chinese had been pressurising the outgoing Oli government against accepting the US grant. The MCC projects are designed to strengthen the cross-border transmission of electricity between Nepal and India, which could become a regular source of income for a country with fast-flowing water resources.Nepal is also trying to renegotiate the Chinese loans on favourable terms, and has expressed concern about the big trade deficit with China. But with international aid and help from India, Nepal may be able to ride out the crisis, and won’t take the Sri Lankanroute.

A third South Asian nation facing difficulties isPakistan.With its huge defence spending,it remains neck-deep in debt. Although it manged to come out of the pandemic much less ravaged than its neighbour, India, inflation and unemployment indices have broken all recordsover the last two years. Imran Khan recently lost his prime ministership in a no-confidence motion tabled against his government. Even his backers, the Pakistan army, didn’t save him.

The country’s balance of payments situation is precarious. On April 1, the FE reserves held by Pakistan’s central bank dropped to $11.3 billion as against $16.2 billion a month ago. In a chronic case of financial mismanagement, the country is once again on the verge of defaulting on loan repayments. With Khan gone, the IMF could come to its rescue and release the next tranche of the 13thloan it has authorised for the countryin 30 years.

Pakistan isanother country heavily indebted to China. Its debt-to-GDP ratio stands at 88 percent. Like a good loan shark, a Chinese consortium bought 40 per cent of the Pakistan Stock Exchange’s shares in 2016 to ‘help’ Pakistan not to default on its burgeoning loans. Another Chinese company took over a 45 per cent stake in Pakistan’s Telenor Microfinance Bank in 2018 to ease its balance of payments position.

One of the leading members of the BRI, Pakistan has sunk billions borrowed from China intothe China-Pakistan Economic Corridor (CPEC) and the strategically-located Gwadar deep sea port. China wants CPEC connected to Gwadar as an alternative to the sea route passing through the Malacca pass. But the entire construction is being done by Chinese companies at the cost of the money lent to Pakistan at commercial rates. The political families of Bhutto-Zardaris and Sharifs have taken turns to milk the country by signing high-cost loans from the Chinese, which in turn are implemented by Chinese companies that pay kickbacks to the ruling elite –politicians, bureaucrats, military top-brass and even judges. The same was the case with power projects, with previous governments fixing high tariffs in order to get huge cuts from the Chinese companies generating power.

Imran Khan, a rare honest politician, was saddled with the financial sins of the past. Every project contracted with the Chinese or even other private companies was over-budgeted to appease those in power, and the ordinary people of Pakistan are bearing the brunt of this thievery by their rulers.

While many of his own party had changed horses mid-race to join Khan’s bandwagon, they and the few other allies – brought in by the army to help him cross the majority mark in Parliament –ditched him in the recent no-confidence vote.

An enraged Khan has blamed the US for toppling his government. He cited a cable sent by the Pakistan embassy in Washington that quotes a State Department official threatening to isolate Pakistan if Imran was not defeated in the vote. In fact, Pakistan has been a client state of the US, and often used as a base by the Americans for carrying out attacks on Afghanistan, as well as on terrorist hideouts in norther Pakistan itself. The UShas always had a strong presence in Pakistan, including a military one.

Khan has made the alleged American interference and regime change a big issue. A day after his removal, millions demonstrated on the streets of Pakistan. Large numbers of Pakistanis living abroad also came out in his support. And since his ouster, Khan has been holding huge rallies, never before witnessed in the country’s history, in different cities across Pakistan. He is demanding immediate elections. But the 11-party alliance supported by Imran’s allies as, well as the defectors, is wary of holding elections anytime soon. With the army holding back and Imran on the offensive, the country seems to be heading towards economic and political chaos.

The crisis in South Asia has become a crucial test for the success of India’sNeighbourhood First Policy. The people of the region are realising that China’s debt trap diplomacy has shattered the economies of many developing countries, and that they should follow the Nepalese example of bargaining hard with the Chinese, or keep them at arm’s length.

Whether it is by the Americans or the Chinese, a highhanded approach to dealing with small, poor countries – coercive diplomacy which entails anything from pressurising the client country to interfering in its internal affairs – is counterproductive. India too once practised such measures in Sri Lanka during the civil war, and in Nepal by imposing a blockade against the landlocked county, and got a bloody nose. India’s new policy is one of mutual respect and cooperation, not coercion.  The policy is already showing results in India’s neighbourhood. Pakistan, however, remains a problem. But a stable Pakistan will be in India’s best interests.