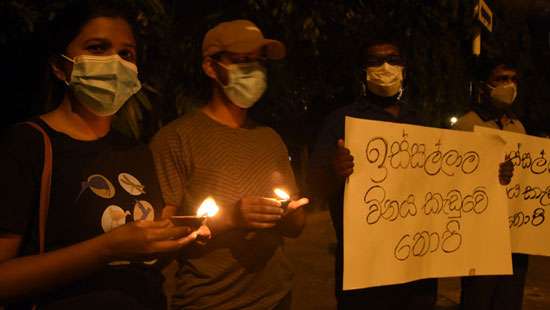 Neville de Silva reflects on the state of a country in crisis, and a government teetering on the brink

When I ended last month’s column hoping that April would not prove to be hapless Sri Lanka’s ‘cruellest month’ (in the words TS Eliot), I hardly anticipated the current turn of events.

In April the country was to celebrate several ethno-religious festivals. The biggest among them was the Sinhala and Tamil New Year, celebrated by Sri Lanka’s majority community and its main minority. It was also the Muslim month of Ramadan and Easter, commemorated by the Christians.

For over one-and-a-half years Sri Lanka had been grappling with a fast-failing economy. The dwindling of foreign reserves and the consequent shortages of food, medicines, fuel, gas and kerosene for cooking were more recently compounded by power cuts, at times as long as 12hoursper day, bringing manufacturing industries to a standstill and forcing businesses to close down early.

With the country struggling to avert bankruptcy and an unprecedented rise in inflation and spiralling commodity prices, many working-class families, daily wage earners and farmers were facing penury and starvation.

Against this dire background Sri Lanka’s 22 million people were anxiously preparing for the April festivities, wondering whether there would be anything to celebrate.

Then it happened. On March 31 the residents of Mirihana, a middle- class town on the outskirts of Colombo, held a candle-light protest to highlight the daily power cuts that disrupted their family activities. The protest, initially by women, attracted passers-by and huge crowds from neighbourhood towns and residential areas as President Gotabaya Rajapaksa lived in Mirihana in his private residence.  Swelling crowds shouting slogans later clashed with police firing tear gas and water cannons to break up the demonstration, but many of the protestors held their ground till the next day.

The Mirihana protest has sparked the island-wide conflagration that now has the once all-powerful Rajapaksa family-run government teetering on the wall like Humpty Dumpty awaiting a splintering fall. It will remain an important landmark in this uprising, which some have called, rather erroneously, Sri Lanka’s ‘Arab Spring’.

Mirihana began the assault against the Rajapaksa fiefdom that once seemed impregnable. Gotabaya Rajapaksa is president. Brother Mahinda, who served two terms as president, is currently prime minister. Another brother, Basil, a dual citizen with US citizenship and a home in Los Angeles, was until last month finance minister, and the eldest brother Chamal holds the post ofirrigation minister and state minister of security. Mahinda’s eldest son Namal, whom his father sees as heir apparent, was sports and youth affairs minister, among other portfolios.

Together, the family reportedly controlled 72 per cent of government resources, free to use as they deemed fit, even to farm off to their acolytes and business friends in the way of government contracts and import monopolies, even during the Covid pandemic.

Today, however, that fortress of power and privilege appears as exposed as France’s Maginot Line, set to crumble against a German Blitzkrieg.

All the Rajapaksas, except Prime Minister Mahinda, lost their positions last month when President Gotabaya suddenly dissolved the cabinet in a desperate attempt to quell the mounting outrage against him. It seemed a weak moral sidestep, for the protesters’ cry was not only against the president but against the entire Rajapaksa family, which they claimed had dipped their hands into the country’s assets for personal gain.

Mirihana lit the fuse for the enormous protest that flared up at Colombo’s beach-front Galle Face Green, right opposite the Presidential Secretariat from where political power radiated. It was this that breached the Rajapaksa citadel.

At the time of writing, this protest – which shows signs of unifying the country’s multiracial, multi-religious society and has drawn crowds of all ages and a wide cross-section of the Sri Lankan community, including the professional classes – has entered its 17thcontinuous day, with hundreds of protesters camped there day and night despite the heat and rain.

Yet it is no Arab Spring. It is an orderly, non-violent protest, mainly of youth of all shades, with an inventive genius to keep themselves and their cause alive.

Never in Sri Lanka’s 74 years of post-independence history has the country seen anything like this, even though anti-government protests are nothing new to the country, which has seen Leftist political parties and associated trade unions functioning even under British colonial rule.

The main rallying slogan is ‘GotaGoHome’, telling Gotabaya to return to his home – also in Los Angeles –though he relinquished his US citizenship to be eligible to contest the presidential election in November 2019.

Built round that slogan are a myriad other satirical comments in song, verse, caricatures, cartoons and videos, the creative work of the protesters deriding the Rajapaksas, some demanding they return the country’s supposedly stolen assets and otherwise accumulated wealth in tax havens.

Although the protesters are now demanding that the whole Rajapaksa family pack their bags and quit, the main target quite rightly is President Gotabaya. It was his military arrogance – having played a role in the defeat of the separatist Liberation Tigers of Tamil Eelam(LTTE) in 2009, under the leadership of his president brother Mahinda – and his ignorance of politics and governance, and over-reliance on incompetent advisers that started the economic rot.

With a group of retired and serving military men appointed to key civilian positions and a coterie of so-called intellectuals and businessmen as advisers, he plunged head-first into economic policy decisions.

Within a few days of assuming office, he hadslashed VAT from 15 per cent to 8per cent and abolished some other taxes that cost the state a whopping 28per cent in revenue. It led the Central Bank to print money feverishly to meet budgetary commitments, causing inflation.

Also disastrous was the overnight decision to ban chemical fertilisers that drove farmers to burn effigies of ministers and demonstrate on the streets, demanding restitution of their fertiliser needs or face food insecurity in the months ahead, forcing a once adamant president to retract.

While economists had foreseen the impending danger in depleting foreign reserves and international debt repayments this year, and hence urged the government seek IMF assistance, the president clung steadfastly to the advice of the Central Bank Governor and the Treasury Secretary, among others, who dismissed the idea for more than one year even ignoring cabinet support for IMF help.

In a belated gesture, President Gotabaya sacked the two officials immediately after replacing his cabinet with younger, untested MPs. He sent his new finance minister to Washington to plead with the IMF for immediate relief.

The president is hoping forpolitical concessions he has agreed to – including returning to parliament and the prime minister powers that he usurped on coming to office through the 20thconstitutional amendment. He has now agreed to form an interim All Party government.

But one sees a growing rift in the once close-knit family. Names proposed by Prime Minister Mahinda for the new cabinet were ignored by his brother, causing the prime minister to boycott the swearing-in of the new ministers.

If the president opts for an interim government, it means he has decided to stay put but call for the prime minister’s resignation. It would appear that the prime minister suspects he is going to be sacrificed on the altar of expediency.

In an interview the other day, Prime Minister Mahinda insisted that he will not resign and any reconstituted government must be under his leadership. In the meantime, he has been trying to whip up support against his ouster by canvassing MPs to muster the required 113 votes.

How the protesting public will react to all these political manipulations will depend on what is on offer. Right now they are determined to continue until President Gotabaya surrenders, which seems unlikely.