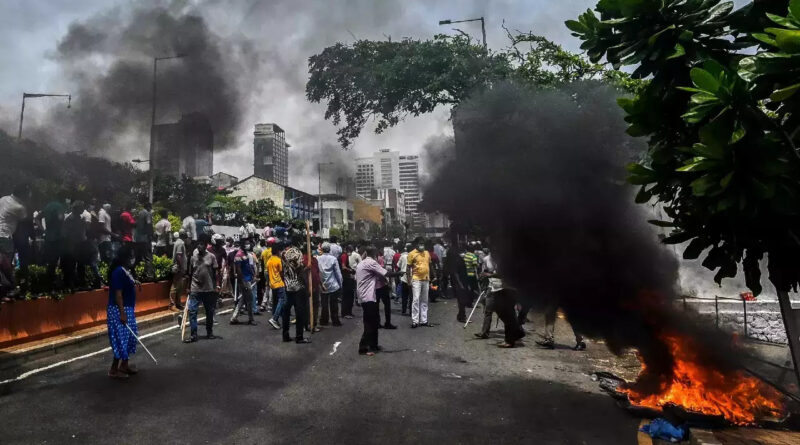 There is a saying in Sinhala, the language of Sri Lanka’s majority, which loosely translated recalls that the departing devil delights in smashing the pots and pans.

Labelling Mahinda Rajapaksa, two-time president and the best known of the Rajapaksa family that has dominated Sri Lankan politics for decades, as a ‘devil’ may be considered grotesquely unfair by his faithful followers, but even more degrading appellations have been attached to him in his waning years.

His parting words on the morning of May 9, hours ahead of his hasty resignation as prime minister that day, set off a train of events that was more a smashing of heads and anatomies than a mere breaking of pots and pans.

The violence done by Donald Trump’s goons who smashed up the Capitol in January last year was nothing compared to the mayhem that followed the May meeting of Rajapaksa supporters at Temple Trees, the prime minister’s official residence.

If Rajapaksa’s words that day agitated the assembly of 1,000-plus political lickspittles, beneficiaries and dragooned participants, what stirred the multitude – transported to Colombo in rented buses from near and far– were the speeches of some recently dislodged cabinet ministers and other political underlings.

Their fiery words, following Mahinda Rajapaksa’s defiant speech, provided the verbal accelerants that provoked those gathered to arm themselves with poles, iron rods and other weaponry (brought with them or generously supplied) and march out of the prime minister’s residence with dangerous intent.

The inciteful stirring of politicians who spread havoc was sufficient provocation to ‘let slip the dogs of war’, as Mark Antony said standing before the body of the slain Caesar.

It did not take long for the pro-Mahinda rottweilers to set upon peaceful protestors–men and women, young and old–who had paraded for days demanding that the prime minister resign, building on earlier calls for his president– brother Gotabaya–to quit the presidency for making such a mess of governance that had brought the country to its knees.

It was a dramatic and unexpected twist of history. For 13 years Mahinda Rajapaksa had been hailed as a national hero, mainly by the Sinhala Buddhist majority. As Sri Lanka’s presidenthe oversaw the military defeat of the Tamil separatist Liberation Tigers of Tamil Eelam (LTTE), ending a near three-decade war in which well over 100,000 people of all nationalities were killed.

Having beaten up the protestors and destroyed their makeshift shelters opposite the prime minister’s residence, the unruly mob– led by some MPs and local councillors –headed down the centre road towards the beach front promenade, Galle Face Green, a kilometre or more awaywhere several thousand other anti-government protesters– mainly youth– had been camped for a month or more opposite the presidential secretariat.

The UNP was wiped out at the August 2020 parliamentary elections

Their rallying cry, which unified Sri Lanka’s multinational, multireligious society in this unprecedented mass struggle,was ‘Gota Go Home’, a call for President Gotabaya not merely to resign but return home, presumably to his Los Angeles residence, from whence he came to serve his elder brother Mahinda,elected president in 2005.

Within minutes of violence being unleashed,social media were broadcasting live the brutality in video clips.This brought other supporters of the ‘aragalaya’ (struggle) rushing to the two protest sites under attack. As news spread later to other parts of the country, retaliatory mobs and vigilantestorched the homes of government ministers, MPs and local councillors and burned buses transporting the pro-Mahindaelements.

A government MP and his security officer were battered to death, the toll rising to ten later.Some government politicians went into seclusion, including Mahinda Rajapaksa (he had resigned that evening) and family, who were helicoptered early next day to a distant naval base in northeast Trincomalee.

One would have thought these unconscionable acts of mob violence across the country would have driven some sense into the ruling Rajapaksas and their glorified advisers and security bureaucrats.Theburning and looting that followed the early violence were testimony to the mood of a nation on the verge of economic bankruptcy.

After years of financial profligacy, the selling and alleged stealing of state assets, a harried and incensed populace was crying ‘enough is enough’. They not only called for Rajapaksa to go but also for him to abolish the extraordinary powers that the president had grabbedfor himself with the 20th constitutional amendment, pushed through parliament in 2020.

Now, with no prime minister and consequently no cabinet, as the constitution stipulates, President Gotabaya Rajapaksatried to cobble together an All Party Government or an interim arrangement of some sort to keep himself in power.

Gotabaya was making it clear he was ready for the long haul, defying the nationwide call from leading Buddhist clergy, the head of the Catholic church, the Bar Association, Chambers of Commerce, trade unions and civil society organisations for him to relinquish power,followed by constitutional changes and the restoration of democratic governance.

Two days after the mob riots, the president went on TV promising to announce a ‘unity government’ and, crucially,toname a prime minister ‘who will command a majority in parliament and the confidence of the people’. He approached opposition leader Sajith Premadasa, leader of the SJB, to take over the premiership. While Premadasa was thinking it over and preparing preconditions, the president appointed Ranil Wickremesinghe, leader of the United National Party (UNP).

Whether it was desperation or cynicism that drove Gotabaya to pick Wickremesinghe, we will knowin the coming days as this tragi-comedy unfolds. This is the sixth time that Wickremesinghe has been resurrected as prime minister,which should make even Lazarus,with his single revival,envious.

The UNP, one of the oldest political parties in Sri Lanka that has ruled the country several times, was wiped out at the August 2020 parliamentary elections, losing every single constituency it contested, including that of its leader Wickremesinghe.

Still, the total votes the party polled entitled the UNP to have a single ‘National List’ seat in parliament, which Wickremesinghe claimed a year or so later and so entered the legislature.

In his May 11 address to the nation, Gotabaya Rajapaksa pledged to nominate a person who commanded a majority in parliament and had the confidence of the people. How a party leader with no parliamentary seats other than his own, and rejected by the people at the elections, could fit the bill, as required by Article 42 of the Constitution,is beyond belief.

Unless, of course, a deal had been done beforehand.Is this some kind of Faustian pact, aimed atprotecting the Rajapaksa family from alleged offencesand providing them witha degree of political leverage, as some observers argue? A deal in which moral and political principles and values are to be sacrificed for power and anticipated glory?Time will surely tell.

At the time of writing, more deals are on the cards, with the cabinet expanding every few days, making this interim administration seem permanent, with Gotabaya here to stay.

Besides some recycled ministers from the past,MPs from other parties have been enticed with cabinet posts, resulting in crossings and double-crossings.Still to come are a dozen state ministers.

Sri Lankan politics, it seems, is becoming a marketplace for second- and third-hand goods.

Neville de Silva is a veteran Sri Lankan journalist who held senior roles in Hong Kong at The Standard and worked in London for Gemini News Service. He has been a correspondent for the foreign media including the New York Times and Le Monde. More recently he was Sri Lanka’s Deputy High Commissioner in London