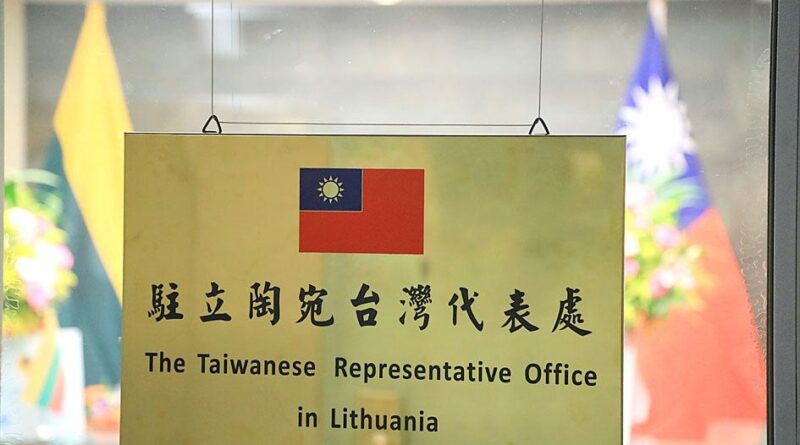 Beijing lies in the crosshairs of liberal democracies’ retaliation against authoritarianism, with Lithuania leading the way. Humphrey Hawksley reports from Vilnius

In a business district a couple of miles from Vilnius’ Medieval Old Town, an office block sign lists organisations and companies working there. Nestled between a company called BaltCap and the big accountancy firm Price water house Coopers is the Taiwanese Representative Office in Lithuania, a building which has lit a spark, pitting tiny Lithuania against China.

Taiwan has many similar offices around the world, but they are designated only under the capital city, Taipei, as opposed to the island territory, Taiwan, which resonates far more as the rebel independent nation that China constantly threatens to recover.

For allowing the title ‘Taiwanese’, Lithuania has been accused by Beijing of violating the 1979 One China Policy, whereby governments can have diplomatic relations with either Taiwan or China, but not both.  Only 15 recognise Taiwan.

Lithuania denies the accusation. But, undoubtedly, it is taking a lead in pushing back against China’s growing influence in Europe.

‘We love Taiwan,’ Lithuanian member of parliament Matas Maldeikis told Asian Affairs. ‘We are very sceptical of China. Show me an example of a country in a win-win situation with China. The European Union is a win-win for us. The United States is a win-win.  With China, I only see a country that uses you.’

By deliberately upgrading Taiwan’s status, Lithuania has rocked the boat both with Beijing and the European Union, where senior figures have accused Lithuania of unilaterally and unnecessarily provoking China.  ‘They were telling us that billions would be lost in trade because of our stupid position on Taiwan,’ recalled Maldeikis.

When the Taiwanese Representative Office opened in October last year, Beijing responded by withdrawing its ambassador and implementing a raft of trade and economic sanctions.  It blocked all imports from Lithuania and threatened secondary sanctions against companies which dealt with Lithuania.

The dispute became a test case for the European Union, which had preferred sticking with its more non-confrontational China policies. But, in January, the EU came down on the side of its member state and referred Beijing to the World Trade Organisation for acting illegally.

The WTO case may take years to resolve but, a month later, Russia launched its war in Ukraine and the lines between authoritarianism and democracy sharpened. China’s possible invasion of Taiwan came into focus as a comparative scenario in Asia.

With a population of fewer than three million, Lithuania has a record of putting down markers against dictatorship. It was the first Soviet state to win independence in 1991, against the wishes of both Moscow and Washington.  At the time, the US wanted the Soviet Union to remain intact in order to support the reforming vision of then President Mikhail Gorbachev.

A generation later, Lithuania broke away from Beijing’s Seventeen-plus-One trade grouping with Central and Eastern Europe on the grounds that it was a mechanism to break up the EU.

The country has spent years diversifying energy supply chains such that, after the Ukraine invasion, it was the first European government to announce an end to gas purchases from Russia.

‘Countries need to understand that it is in their long-term interest to strengthen their supply chains with democracies instead of becoming over-dependent of authoritarian states.’

Flanked by the national flag in his high-rise office overlooking the River Neris, Huang explains that Taipei is setting up initial investment funds in Lithuania worth $1.2 billion, with an emphasis on technology.  He believes that, as more Taiwanese companies move out of China, Lithuania could prove to be an ideal new European base.

‘Are you not tempting the fracturing of the One China Policy?’ I ask.

‘I wouldn’t say this is a trigger,’Huang replies carefully. ‘But it is a useful indication.’

‘And would you like Lithuania to recognise Taiwan as an independent nation?’

‘Yes, of course, we would,’ he says enthusiastically. ‘The whole world understands that we are our own nation. Only the Chinese government does not recognise that reality.’

Earlier hair-line fractures in the One China Policy appeared in December 2016 when Donald Trump took a congratulatory election call from President Tsai Ing-wen.

Since then, a stream of high-ranking American officials has visited Taiwan, and the EU has declared China to be a ‘systemic rival’. The once-hailed Belt and Road Initiative has faltered and stories of pushback against China range from Lithuania to Pakistan to the tiny South Pacific island of Nauru.

With China increasing its threats against Taiwan and refusing to condemn Russia’s war in Ukraine, Lithuania’s unilateral upgrading of Taiwan’s status raises an inevitable question about the sustainability of the One China Policy.

Together with Moscow, Beijing now lies in the crosshairs of the fight-back from liberal democracies.

‘The question is not one of independence. It’s about the withdrawal of the Chinese Communist Party which is occupying that territory,’ answered Maldeikis.

‘But if Lithuania’s independence triggered the collapse of the Soviet Union,’ I countered, ‘might your recognition of Taiwan trigger a global change with China?’

‘I would like that,’ replied Maldeikis, his tone edged with caution. ‘But this is not a decision that could come from Lithuania alone. It would have to be a decision of the European Union.’

Within the unpredictability prompted by the Ukraine war, scenarios of readjustment that seemed far-fetched less than a year ago are edging closer to the centre of the world stage.

Humphrey Hawksley is a former BBC Beijing Bureau Chief and Asia Correspondent and host to the monthly Democracy Forum Debates.  His latest book Asian Waters: The Struggle Over the South China Sea and the Challenge to American Power is published by Abrams Press.