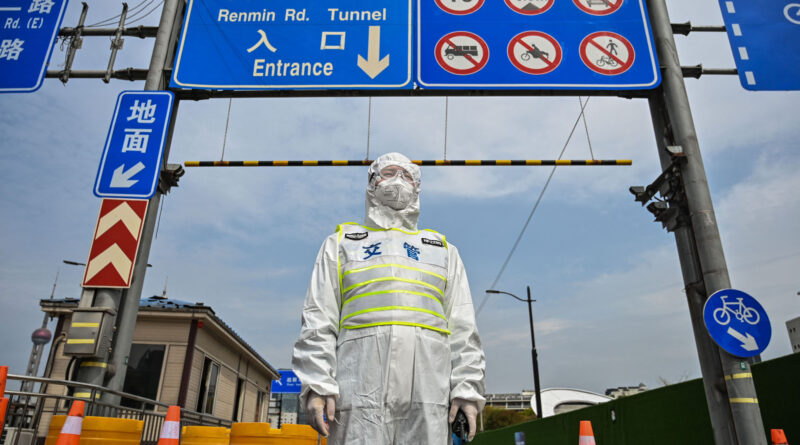 Disruption to the global economy caused by China’s ‘zero-Covid’ lockdowns have focused attention on the country’s response to the pandemic. Duncan Bartlett sees a choice of interpretations

There are two distinctly different narratives surrounding the decision to place Shanghai and other parts of China into a prolonged lockdown in the spring and early summer of 2022.

In the official communications of the Chinese Communist Party, the precaution was needed to save thousands, if not millions of lives. In this version of events, the action was disruptive but effective.

By mid-May, Shanghai’s health commissioner Zhao Dandan declared: ‘All 16 districts in the city have achieved the societal zero-Covid goal.’

The phrase ‘societal zero-Covid’ refers to the idea that new cases were limited to those among people who were being detained in centralised quarantine, and infections were not spreading through the wider community.

Yet there is another interpretation of events, which is much more critical of China.

In the international media, especially American newspapers, readers are often informed that China over-reacted to the Covid problem, imposing ‘draconian’ measures, in line with the authoritarian approach of its government.

The lockdowns were a display of power by Xi Jinping and served as a reminder that ‘the people’s war on Covid’ is an ideological struggle, in which personal freedoms must be sacrificed in the national interest. This is why ‘socialism with Chinese characteristics’ remains the core slogan of the government.

One of the flaws of the latter explanation is that China did not move towards such a draconian approach at the start of the pandemic. True, there was a lockdown in Wuhan, where Covid was first identified. But for the best part of two years, in other places and on the whole, Chinese people enjoyed more freedoms than those in many other parts of the world.

Indeed, for a long time it seemed as though the relatively limited impact of Covid on China would ensure its continued prosperity and enable it to emerge as an engine of global growth in the post-pandemic era.

That hope, however, is diminishing. Few economists expect China to reach its stated growth target of 5.5 percent this year.

Twenty percent of China’s international trade flows through Shanghai, so when the port was hit by a lockdown at the beginning of April this year, the repercussions quickly rippled across the globe. Companies such as Apple, Tesla, Adidas and Estée Lauder all warned of disruption to their supply chains and the likelihood of higher costs for consumers.

Those who wish to analyse China’s response to Covid face further challenges. It is unwise to take the data spread through Chinese official channels at face value, as statisticians often tend to twist information to add a rosy gloss to bad situations.

This presents a problem when it comes to knowing how many people in China were actually infected by Covid, or died from it, before the wave of the highly infectious Omicron variant in 2022.

In addition to that problem, it is hard to know for sure how many people have been vaccinated, particularly the elderly.

The Economist magazine claimed that the vast majority of people who died in Hong Kong were unvaccinated old people. It said around 65 per cent of over-80s in Hong Kong had not been jabbed when the Omicron wave started. It is therefore likely that China’s less developed regions had an even lower vaccination rate.

Then there is the debate about the efficacy of the types of vaccines China has been using.

By mid-May 2022, China claimed 90 percent of its population had been jabbed using the domestically manufactured CoronaVac and Sinopharm vaccines. About a year previously, the World Health Organisation had approved those two types of shots for emergency use, on the basis of limited clinical-trial data suggesting that CoronaVac was 51 per cent effective at preventing symptomatic disease, and Sinopharm 79 per cent effective.

This was on a par with the 63 per cent efficacy reported for the University of Oxford AstraZeneca’s vaccine at the time of its WHO listing, but lower than the 90-plus per cent efficacies of vaccines developed by Pfizer BioNTech and Moderna.

When the authorities in China began to lock down strategically important regions such as Shanghai, the immediate question was: have the vaccines been a failure? This created international concern, as the Chinese vaccines have also been exported to other countries, including Pakistan, the Seychelles and Indonesia.

Scientists say that no vaccine can stop the spread of Covid but many can be effective in reducing its symptoms and preventing people from dying of the disease. For that reason, in China and many other countries, vaccines and lockdowns formed part of a coordinated pandemic response.

Controversially, the Chinese chose to confine those who tested positive in separate quarantine facilities. This created fear among those who were told to stay in their homes for weeks on end. Would they too be hauled off by police in hazmat suits to places where the disease was rife?

The authorities in Shanghai and other Chinese cities also established ‘precautionary zones’ – residential compounds where no infections had been identified in the previous 14 days.

By mid-May, people were creeping out of those areas, to buy food or visit the dentist. Chinese TV showed the relief on people’s faces when they were finally allowed out for brief periods.

The Chinese state has been maintaining a largely upbeat interpretation of the story, praising people for their fortitude in a time of crisis. But for those watching through the lenses of foreign media, the messages are far more downbeat.

This is not a particular worry for president Xi, who has long been adept at brushing off criticism of China from abroad. He knows that if the lockdowns are lifted by the end of 2022 and trade starts to flow again, the shortcomings of the Chinese health system and its pandemic measures will slide down the media’s agenda. That would leave China’s Covid response as a matter of concern to a few foreign specialists, as well, of course, to the citizens of China itself.

Duncan Bartlett is the Editor of Asian Affairs and a research associate at the SOAS China Institute, University of London