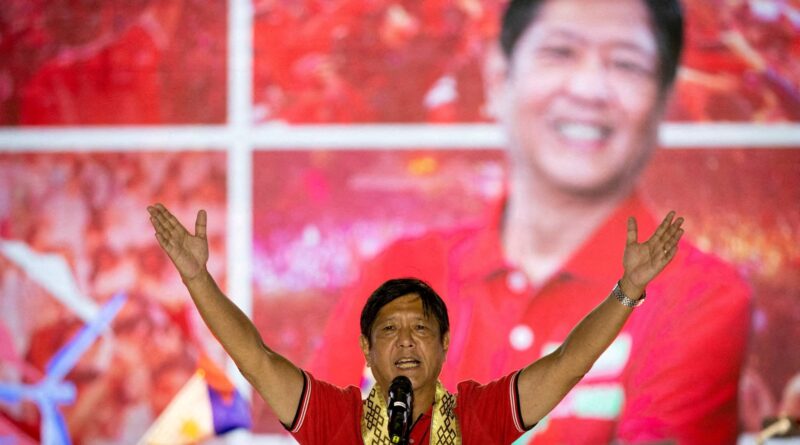 Richard Gregson assesses the outcome of the Philippines’ presidential election and what it may mean for the country, particularly vis-à-vis relations with China

‘Bongbong’ has emerged triumphant from the Philippines’ presidential election. What might appear surprising to many is that Ferdinand ‘Bongbong’ Marcos Jnr, son and namesake of the former Filipino dictator, who was forced to flee the country in the wake of the armed, forces-backed People Power Revolution that returned democracy to the country in 1986, won the May 9 presidential hands down – 36 years after his father’s ignominious dethroning.

Marcos Snr ruled the country for 21 years with an iron hand, 14 of them under martial law, when he resorted to torture, jailing and assassinating his critics and opponents. The dictator and his cronies looted the country, and Marcos stashed away billions in secret foreign bank accounts, while owning lush properties at home and abroad.

Yet, despite his background, Bongbong won. Slush with funds, his election campaign was aggressively run on social media and via a blizzard of advertising and paid stories in the media. So much so that he succeeded in ‘erasing’ his family’s inglorious past from the public memory, particularly among those who voted for him. Rather, he was able to paint a rosy picture of prosperity and stability during his father’s autocratic regime, as compared to the chaotic times that followed Marcos’ flight to Hawaii, where he died in 1989.A Hawaii court awarded $2 billion from his estate as compensation to more than 9,000 Filipinos who filed a lawsuit against him for torture, incarceration, extrajudicial killings and disappearances.

An archipelago comprising around 7,640 islands and covering inland bodies of water spread over 300,000 square kilometres, the Philippines has the world’s fifth-longest coastline. With its strategic location, it has been one of the United States’ oldest allies in the region. The Spanish colonial ruler ceded the islands to the US in 1898, and the Americans occupied the country till the brutal Japanese invasion in World War II, in which it is estimated that over a million Filipinos died as they resisted the invading forces. The Philippines was granted independence by the US in 1946.

Aquino Snr, it may be recalled, was assassinated in 1983 on his return to the Philippines from exile in the US, triggering massive demonstrations against Marcosled by his widow, Corazon ‘Cory’ Aquino. The events culminated in the People Power Revolution and the ouster of Marcos Snr in 1986. Corazon Aquino was subsequently elected president. The Marcos family, however, was allowed to return to the Philippines in 1992.Since then, they have been meticulously planning their comeback.

Bongbong’s partnership with Sara Duterte, incumbent President Rodrigo Duterte’s daughter, as his vice presidential running mate gave him a clear edge. Robredo had to relyon 2 million grassroots volunteers who conducted a door-to-door campaign to woo voters and counter the onslaught of online disinformation unleashed by the Marcos clan. She even attracted huge crowds at her ‘pink’ rallies that were compared to the ‘yellow’ People Power rallies of 1986. But she was unable to counter the insidious torrent of disinformation unleashed by Marcos’ campaign managers. Moreover, the Marcos-Duterte dynasts also enjoyed the backing of the corrupt elite families, who wield enormous influence in their respective regions.

While Robredo’s election pitch focused on good governance and an anti-corruption crusade, Marcos Jnr called on voters not to judge him by his ‘ancestors’, but by his ‘actions’. He desisted from making any concrete policy statements or participating in presidential debate.  His slogan was ‘Together we shall rise again’, alluding to his father’s days.

The people took the bait. Filipinos tend to harbour scepticism about politicians as they are wary of widespread corruption, social unrest and widening economic disparities. The Southeast Asian nation has seen so many ups and downs since the restoration of democracy: coup attempts, Maoist and separatist insurgencies, economic meltdown. Hence the people feel helpless and resigned to their fate.

The return of a Marcos raised concerns among sections of the people, including those who had suffered during his father’s dictatorship. Thousands gathered at the election commission’s office at Manila to protest against electoral fraud and irregularities. A dark spot is that of foreign affairs and the Philippines’ relations with its neighbours, ASEAN and the US. The president-elect has given no clear hint about the course he will take, especially regarding ties with China and the US.

Both Washington and Beijing are closely observing political developments in the Philippines. Outgoing President Rodrigo Duterte had, after coming to power in 2016, pursued a foreign policy favouring China. His ‘war on drugs’ prompted accusations by the West of gross human rights abuses, which were not received kindly by Duterte as he drew closer to China.

The Biden administration, however, is more optimistic. Over the last year, the Chinese maritime militia and coast guard have been transgressing the disputed waters/reefs in the West Philippines Sea. This did not sit well with Manila. Moreover, infrastructure development pledges made by China did not materialise; nor did Chinese vaccine diplomacy. The US and UK donated more vaccines to the Philippines than China. The Visiting Forces Agreement (VFA), a key bilateral security pact, was announced last year during US Defence Secretary Lloyd Austin’s visit to Manila. The acquisition of Brahmos anti-ship cruise missiles from India is another indication of souring Sino-Filipino relations.

Although the US administration would have been more at home with Robredo, Washington perceives Marcos as ideologically closer to the US than his predecessor. President Biden was one of the first heads of state to greet Marcos after he won the election.  But Marcos might follow a more pragmatic path, not wanting to enrage his powerful western neighbour. In a recent statement, he said that South China Sea tensions would be resolved bilaterally with China, without American involvement – a line toed by President Duterte.

As we know, China refuses to accept the ruling of the South China Sea Arbitration, given under Annex VII of the United Nations Convention on the Law of the Sea. It gives the Philippines sovereignty over the disputed territory of the West Philippines Sea, which is the official designation given by the government of the Philippines to the waters/reefs of the South China Sea that are its exclusive economic zone. The Duterte administration had adopted a non-confrontational approach to the dispute, while batting for greater trade with China and inviting Chinese investment in infrastructure projects. The new government in Manila is also likely to ‘engage with China’ and avoid being drawn into US-China antagonism.

Similarly, there is no clarity regarding the domestic policies that Marcos Jnr will pursue. His family has long been a part of the Philippines’ kleptocracy. Having been backed by Duterte, and with Sara Duterte as his vice-president, Marcos Jnr may not open investigations into human rights violations and extrajudicial killings committed during Duterte’s ‘war on drugs’ crackdown. The violations are under investigation by the International Criminal Court.

Amnesty International has expressed concern and Human Rights Watch has called on Marcos Jnr to end the ‘war on drugs’, order impartial investigation and prosecute those found responsible for the killings.

So, as dynasts and kleptocrats continue to rule the roost in the Philippines, the people of this beautiful archipelago may look forward to electing a pro-people government that will fulfil their dreams– but that may lie some way in the future.