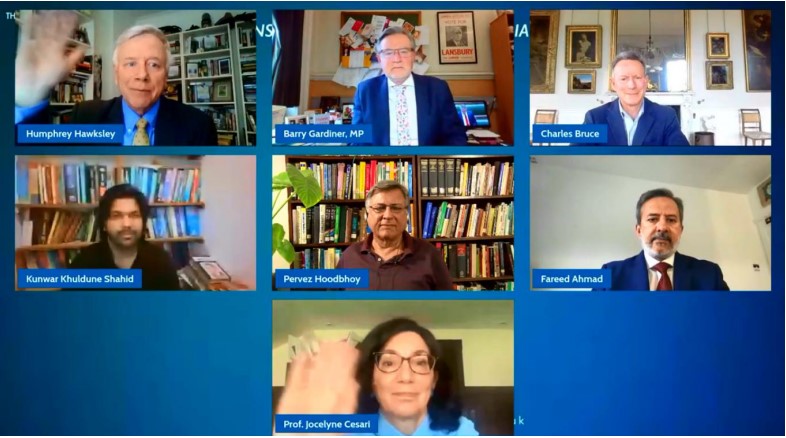 A complex, sensitive and emotive issue was the focus of The Democracy Forum’s latest seminar, which explored the labyrinthine theme of Pakistan’s Islamophobia syndrome

Pakistan’s systemic use of religion to establish legitimacy for state power was a key talking point at The Democracy Forum’s recent virtual seminar, titled ‘Making sense of Pakistan’s Islamophobia syndrome’, at which a panel of experts gathered to discuss, among other ideas, the concept and definition of Islamophobia, and how it manifests both within and outside Pakistan.

Introducing the event, TDF President Lord Bruce said the webinar had been convened to consider the contradictory attitudes to Islamophobia which have come to define the Pakistan state. In reference to the sanctity for religious tolerance in Pakistan claimed by former PM Imran Khan and the country’s founder, Mohammed Ali Jinnah, Lord Bruce argued that the founding principles of theological tolerance and religious pluralism expressed by Jinnah have, unfortunately, ‘never been given a chance to take root in Pakistan’, and that ‘intolerance has been pursued by the state in a deliberately divisive political strategy, with the intention of undermining the security of sub-state and minority groups’.  He also highlighted how intolerance and persecution of minority Muslim groups has continued unabated for almost as long as Pakistan has existed, and spoke of how sectarian conflict between different Muslim sects has been instrumentalised by the Pakistan state, thus exacerbating Shia-Sunni differences. Furthermore, sub-state nationalism has continued to plague relations between the Pakistan government and its peripheral regions of Baluchistan and NWFP, while the strategic imperative of retaining a territorial interest in Jammu and Kashmir condemns India and Pakistan never to find a solution to this conflict. The creation of a ‘fundamental dichotomy’ at the base of Pakistan’s statehood, concluded Lord Bruce, sustains its political instability, justifies the dominance of its military interests and consequently stifles the growth of its democratic institutions.

It is important to separate Islamophobia from Muslim-phobia, insisted nuclear physicist and activist Dr Pervez Hoodbhoy. Discrimination against or mistreatment of Muslims will not raise resentment to the level that criticism of Islam will invoke, as Islam is said to be perfect, whereas Muslims, as people, can be imperfect. Protests against critiques of Islam do happen in other Muslim nations such as Iran and Indonesia, said Hoodbhoy, but not to the same extent as in Pakistan, where rioting has taken place in reaction to provocations such as the Charlie Hebdo case. This, he believed, is because in Pakistan there has been a systemic use of religion to achieve legitimacy for political power and individual acceptance into society. A consequence has been a seepage of religious indoctrination into the entire education system, which has led to a charged populace that will react very readily to the slogan that Islam has been insulted. This, said Hoodbhoy, is qualitatively different from elsewhere in the world, and the use of religion in Pakistan has become elevated to a point where it has become virtually impossible to act against forces that claim to be Islamic forces. The kind of teaching that happens in Pakistani schools, he added, reflects what is taught in madrassas, which has led to the elevation of religion as a major force in Pakistani politics. Concluding with a warning that Imran Khan, in seeking to return to power, is using symbols of religion, as well as Western conspiracy, Hoodbhoy said the future of Pakistan is ‘in the clouds’, with unprecedented levels of tension, as even the army is split into pro- and anti- Khan camps.

Arguing that the term ‘Islamophobia’ is itself problematic was Kunwar Khuldune Shahid, a correspondent for The Diplomat, who said this was because it placed the focus on Islam, not Muslims. The vast majority of the Muslim world seems to be more interested in shielding Islam from critique than in protecting Muslims from persecution, he said, with Pakistan, for example, remaining silent about what is happening in China to the Uyghur Muslims. Indeed, the term ‘Islamophobia’ is used more frequently about France’s satirical Charlie Hebdo publication than about the Communist Party of China, which is incarcerating Uyghur Muslims in concentration camps. Shahid considered how the global ‘Islamophobia’ narrative has failed to discuss this, and how it has been co-opted by progressives, to leave dissenters at the mercy of Islamists in the Muslim world, more specifically Pakistan. In highlighting Pakistan’s draconian blasphemy laws, which have been ‘weaponised’, Shahid said these make it perfectly rational to fear Islam, as there is no other country in the world where you can be put to death or imprisoned for critiquing Islam. And no Muslim country treats its Muslims as Pakistan treats its Ahmadis – only China, in its treatment of the Uyghurs, comes close. How, then, asked Shahid, can Pakistan take any kind of moral high ground about religious discrimination when it behaves as it does, and is a microcosm of the ailment affecting the Muslim world?

Jocelyne Cesari, J. Dermot Dunphy Visiting Professor of’ Religion, Violence, and Peace building at Harvard Divinity School, and Professor of Religion and Politics at the University of Birmingham, outlined Pakistan’s legislative trajectory, from a state aimed at being a shelter for Muslimsand inclusive of religious diversity, towards an ever more sectarian form of Islamic state. Reflecting on the root causes of the country’s home grown Islamophobia, she explored ‘hegemonic Islam’ and ‘Salafisation’, underscoring the nationalisation of Islamic institutions, and the Islamicisation of both the law – wherebythe state ‘brings the existing laws into conformity with the injunctions of Islam as set out in the Qu’ran and Sunnah’, with no law contradictory to such injunctions to be enacted – and the national narrative. With most religious authorities having become incorporated into the bureaucracy of the state, there is little scope for critical thinking, and the common good has become the good of the state. Cesari also considered the state of the public education system, with low literacy rates, and the growing influence, since the 1980s, of Saudi-funded madrassas, where Wahabi and Deobandi teachings merge. Also problematic is the rise of public morality, which impacts personal freedoms, the growing influence of Islamic radical groups, and the ‘Talibanisation’ of Pakistani society.

Problems faced by Ahmadi Muslims in Pakistan, said Fareed Ahmad, National Secretary for External Affairs of the Ahmadiyya Muslim Community UK, show how government calls to tackle Islamophobia (Pakistan was a key actor in the adoption of the UN resolution in March this year) are undermined by the country’s own worsening track record, which damages it in many ways. While Ahmad welcomed Pakistan’s call for less hatred and greater social harmony, he stressed that the country needs to lean towards greater self-examination, and to lead by example. One cannot, he argued, ignore internal persecution while calling for an end to international religious hatred. He pointed to the suffering of Pakistan’s minority religious communities as a stark example, none more so than the Ahmadiyya Muslim Community, which faces institutional discrimination ‘from cradle to grave’, including being denied the right to vote. When federal laws target a religious community to deny them their religious and civic rights, Ahmad argued, it undermines the very cause Pakistan is seeking to champion overseas. Far better to build cohesion at home and show in practice how Islam means and brings peace. That in itself, he concluded, will be the best tool to challenge Islamophobia and all forms of religious hatred around the world.

Summing up was TDF Chair Barry Gardiner MP, who touched on the distinction between the personal and institutional spheres and the problems of pluralism, saying that Pakistan, like other nations, has been unable to find a way of allowing society to both sign up to an ‘absolute, ultimate truth’, and yet still be tolerant of others who don’t share it. This is a question, he concluded, that goes to the heart of how we form society and how the nation state operates as it seeks to unite people with very different views of what ultimate truth is.

Examining contrasting national security responses to the war in Ukraine from China, Iran and India, and the complex historical and economic reasons which lie behind such positions, was Burzine Waghmar, Inaugural Indian Visiting Fellow at the Royal United Services Institute. He spoke of support for Russia among India’s intelligentsia both right and left and also within the populace, with frequent complaints circulating on social media about how the USA came to age during the third Indo-Pakistan war of 1971, ignoring the fact how Kennedy saved Nehru’s and India in 1962. Meanwhile, while former officials at the Indian foreign office privately reminisce what a hard bargain Russia has been on trade and military deals, India is reluctance to denounce the invasion and displease China’s wrong side. The speaker noted that Sino-Indo flare-ups and fatalities have been ongoing since 2017 and that Putin has been very vocal in his displeasure of India joining the group. Indeed, even Mikhail Gorbachev as last visiting soviet premier made it plain to India in November 1986 that the USSR cannot be counted upon. Notably, the Soviets, like the Indians in 1962, had a brief border war with Mao in 1969 and Gorbachev oversaw the first joint demarcation settlement in 1999. Moreover, in terms of economics, India is the third largest military spender after the USA and China and second largest importer of weapons from Saudi Arabia. Since 2007, the USA has secured deals worth more than 21 billion dollars from India and India has spent over 800 billion in arms deals during the last 15 years from Russia. While the trio congratulate themselves on the strength of these ties, the relationships are in reality based on deception and lies and hallmarked by national interests.