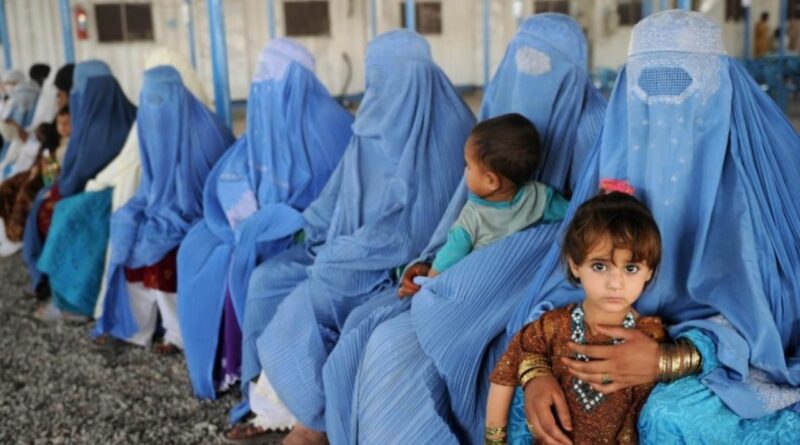 Despite promises and hopes of a more moderate stance on Afghan women’s rights, the current Taliban regime is proving to be as regressive as ever, writes Sudha Ramachandran

In recent months, the Taliban regime has escalated its suppression of Afghan women. It has issued a string of edicts that not only severely restrict their lives but also reaffirm long-standing apprehensions in the international community over the Taliban’s misogyny.

On May 7, Taliban chief Hibatullah Akhundzada announced that all women should wear the all-encompassing blue burqa in public. Officials described the pronouncement as ‘advice’, but they also made known punishments that would be meted out to women and their male ‘guardians’ for not heeding such ‘advice’.

To the international community, the blue burqa with a narrow mesh panel at the eyes is astark symbol of Taliban rule. During the group’s first regime (1996-2001), this attire was imposed on women under the threat of the gun. And now, despite earlier assertions that things would change, the Taliban has done it again.

When the militant movement captured power in Kabul in August 2021, its proponents at home and abroad claimed that the new regime was different from the first. The Taliban, they claimed, had learnt lessons from its failed governance in the past. It was more adept at diplomacy and dealing with a globalised world.

Several foreign diplomats went along with this argument, hoping that the Taliban had indeed mended its ways. Eager to secure the approval of the international community, especially to attract funds to save the teetering Afghan economy, perhaps the new regime would choose moderation, diplomats thought.

In the regime’s first press conference, spokesperson Zabiullah Mujahid said that women would be allowed their rights. ‘We are going to allow women to work and study within our frameworks,’ he said. ‘Women are going to be very active within our society.’

There were other signs of planned moderation. The regime assured girls that they would be able to attend school once the security situation improved and enough female teachers were found to teach them. In December 2021, Akhundzada decreed that women should not be treated as ‘property.’

From the start of their second stint in power, there were indications that the Taliban had not changed

‘Both [women and men] should be equal,’ he said, adding that ‘no one can force women to marry by coercion or pressure’.

But right from the start of their second stint in power, there were troubling indications that the Taliban had not changed. Their misogyny and medieval mindset were on display even in August-September last year, in the appointment of an all-male cabinet. The Ministry of Women’s Affairs was abolished and replaced with the Ministry for Preaching and Guidance and the Propagation of Virtue and the Prevention of Vice.

Women were banned from most jobs. The number of female journalists shrank from 700 to 100 by the end of 2021, according to Reporters Sans Frontières. Women who participated in street protests were beaten, pepper-sprayed, abducted, and even shot dead. In a sinister form of social airbrushing, they were vanishing from Afghanistan’s public life.

Increasingly the Taliban leadership is issuing edicts and orders restricting women’s rights, visibility and movement. Since late December, women are forbidden from taking long-distance road trips on their own; they must be accompanied by a male relative for any road journey beyond 72 km. Moreover, women are not allowed to fly out of the country without a male relative.

The early promises that the Taliban regime made to women regarding education have not been fulfilled. Secondary schools for girls were to reopen on March 23 this year. However, when girls showed up, excited to be back after a gap of seven months, they found the regime had changed its mind. Schools would remain out of bounds for girls until ‘appropriate dress codes’ are agreed upon for them, a statement from the Ministry for the Promotion of Virtue and Prevention of Vice declared. If orders to women to stay at home pushed them out of public life, the edict on wearing the full burqa will make Afghan women invisible.

This recent string of regressive rulings is being attributed to an ongoing battle within the Taliban between its hardline conservatives and the more pragmatic leaders. In this fight, it is the hardliners who have apparently gained ascendance in the regime.

As a result, the hopes and aspirations of millions of Afghan women have been shattered. Several had gained an education over the past two decades and were looking to earn a livelihood. Their expectations have been dashed.

Many households in Afghanistan are headed by women, as male members of the family lost their lives in decades of civil war. These households thus depend on the earnings of women. With women being forced indoors and forbidden to study or work, who will support these families?

By pushing women out of the public space, education and economy, the Taliban has dealt a deadly blow to the Afghan economy. Over the past 20 years, women entered the workforce in significant numbers. According to World Bank figures, they comprised 22 per cent of the Afghan labour force. Yet now this whole section of the country’s potential economic lifeblood has been denied their right to earn a livelihood.

Afghanistan’s healthcare is being hit hard too. It will be difficult for women and children to access healthcare, especially if the family lacks a male member to accompany a woman to a health centre.

According to a blog published in the September 2021 issue of the British Medical Journal, women comprise nearly half of Afghanistan’s community health workers. The program will suffer without them.‘Without women, Afghanistan is at high risk of losing public health gains. The exorbitant impact of forcing women out of the health system will be paid by men, women, and children in the entire country and possibly the world,’the blog pointed out.

It has also become impossible now for women to escape domestic violence. If they cannot travel without a male ‘guardian’, they have little chance of escaping their abuser.

On May 18, Taliban officials prevented female college students from entering a college in Kabul as they were wearing coloured hijabs. Deeming their attire to be too colourful, the Taliban sent them back home.

In the Taliban’s cruel, violent, ugly and dreary world, where humanity comes a distant second to ideology, even a hint of colour is forbidden.