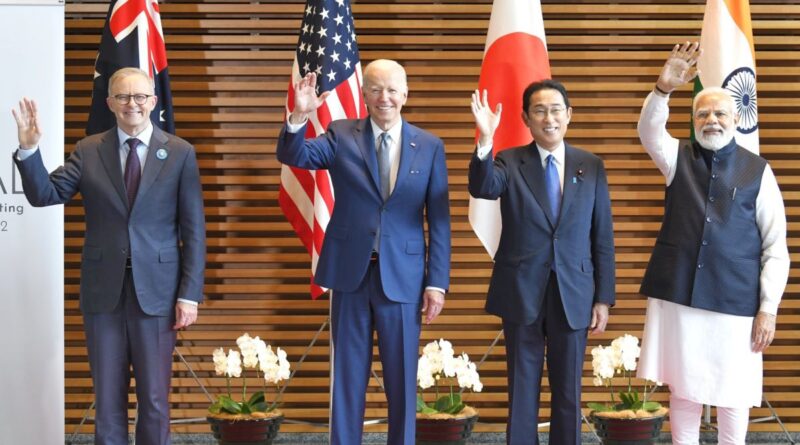 A force for good

A recent meeting of Quad leaders highlighted the grouping’s renewed and sharper focus on securing the Indo-Pacific from an ever more forceful China. Amit Agnihotri reports

In a significant development, the US-led Quadrilateral Security Dialogue, popularly known as the Quad, regained focus on its primary objective – securing the strategic Indo-Pacific from growing Chinese assertiveness – weeks after the grouping became distracted by the Russia-Ukraine war.

Over the past two months, as unprecedented Russian aggression in Ukraine shocked the world, the West became totally engrossed in controlling Moscow, allowing an unhindered China to gain ground in the process.

However, the Quad leaders’ May 24 summit in Tokyo reset the compass of the grouping as US President Joe Biden, Indian Prime Minister Narendra Modi, Japanese Premier Fumio Kishida and Australian Prime Minister Anthony Albanese reiterated their commitment to keep the Indo-Pacific ‘free and rules-based’.

The vast expanse across the two great oceans has become one of the world’s most important shipping lanes, given that 30-40 percent of global trade passes through the region, which has witnessed increasing Chinese forcefulness over the past years. Against this background, the Quad was born in 2020.

Most notable about the Tokyo summit was that the Quad’s focus on the security aspect was sharper than ever and a new consensus allowed the member nations to announce a slew of measures to counter China, which has moved closer to Russia since Moscow raided Ukraine.

Despite the US’ apprehensions over India’s purchases of discounted Russian oil, as Moscow reeled under global sanctions, the two democracies were finally able to converge on their larger strategic objective: containing China.

This mega investment plan is an attempt by the Quad to offer an alternative to the Association of South-East Asian Nations (ASEAN), who benefit from their trade relations with Beijing, and have been reluctant to fully embrace the anti-China grouping.

The launch of the US-led Indo-Pacific Economic Framework (IPEF), which has 13 regional players as members, aims to promote regional growth, sustainability and inclusivity in the region and was a step in the right direction.

India’s ‘Quad is a force for good’ line was appreciated by the leaders and served as a message to China, which dubs the grouping an ‘Asian NATO’ and accuses it of ‘stoking geopolitical rivalries.’

The Quad leaders reiterated their commitment to containing Chinese aggression in the South China Sea and warned Beijing’s ally North Korea over its recent ballistic missile tests that pose a direct threat to Japan.

US President Joe Biden also issued a stern warning to China over any attempts to repeat a Ukraine-like misadventure in Taiwan, days after his Secretary of State Antony Blinken reassured the world that Washington’s primary focus remained on China, even amidst the Russia-Ukraine war.

Besides the Quad summit, the biennial RIMPAC naval exercises, involving the Pacific Ocean rim countries, was another pointer to the fact that the US and its allies were resetting their focus back to the Indo-Pacific.

In an important development, the Philippines, Malaysia, Brunei, Indonesia and Singapore, who have some kind of maritime dispute with China, are among the 26 nations taking part in the mega naval exercises from June 29 to August 4 in Honolulu and San Diego.

‘RIMPAC 2022 contributes to the increased interoperability, resiliency and agility needed … to deter and defeat aggression by major powers across all domains and levels of conflict,’ a US statement said. ‘During RIMPAC, a network of capable, adaptive partners train and operate together in order to strengthen their collective forces and promote a free and open Indo-Pacific.’

The Quad leaders’ summit took place at a time when all four members have some kind of dispute with China.

Beijing’s alleged defence pact with the Solomon Islands allows China to use the islands to launch attacks on Australia. In 2020, Australia’s demand for a probe into the origins of the deadly Coronavirus had invited tariff barriers from China.

Japan, for its part, has become increasingly wary of what it calls routine ‘incursions’ from the Chinese navy. Over the past years, China, which claims most of the disputed South China Sea as well as the Japan-held Senkaku islands in the East China Sea, has downplayed its growing maritime activities, saying that Beijing had the right to defend its sovereignty, security and development interests.

Japan is also worried that China has been threatening Taiwan by flying fighter jets into its air defence zone, while North Korea is deliberately challenging the international nuclear non-proliferation order.Not only is Pyongyang amassing a large stockpile of missiles that can hit Japan, italso recently test-fired a new ballistic missile from a submarine that landed in the Sea of Japan, forcing a review of Tokyo’s missile defence program.

India has been locked in a bitter border row with China along the Line of Actual Control in eastern Ladakh since May 2020.

And as far as the US is concerned, much before the Russia-Ukraine war started, Washington had already entered into an undeclared cold war with China over a race for global supremacy.

Blinken reassured the world that Washington’s primary focus remained on China, even amidst the Russia-Ukraine war.

The Quad’s resolve to do everything possible to deal with an assertive China was reflected in the joint statement issued after the four leaders discussed the issue.

‘We strongly support the principles of freedom, rule of law, democratic values, sovereignty and territorial integrity, peaceful settlement of disputes without resorting to threat or use of force, any unilateral attempt to change the status quo, and freedom of navigation and overflight, all of which are essential to the peace, stability and prosperity of the Indo-Pacific region and to the world.

‘We will continue to act decisively together to advance these principles in the region and beyond. We reaffirm our resolve to uphold the international rules-based order where countries are free from all forms of military, economic and political coercion.’

Powerful words that indicate a strong and reinvigorated focus from the Quad, and may indeed make it a ‘force for good’ for the region and beyond.