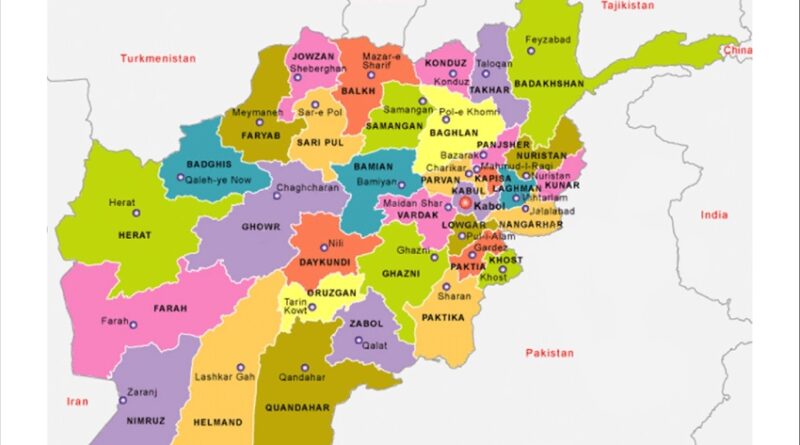 As one of only 14 nations to maintain diplomatic ties with the Taliban, China seems to be playing the long game in Afghanistan, writes Yvonne Gill

The unceremonious withdrawal of US-led forces from Afghanistan last year, and the Taliban takeover, has left a serious security void in South Asia.  Neighbours like India, Iran and the Central Asian republics have found themselves impaled on the proverbial horns of a dilemma: whether or not to maintain relations with the fanatic Taliban government; and if so, to what extent?

Pakistan has been actively backing the Taliban. Yet its relations with the new incumbent in Kabul are more complex than it appears. It is, in effect, riding a tiger, and now Islamabad doesn’t know how to dismount the ferocious creature it has nurtured all these years.

As for China, it has cleverly dug its heels into the mountainous country, where it is among just 13 others to continue a diplomatic presence there. Beijing is playing a pragmatic long-term game of geopolitics, weighing up all options from infrastructural investments in this largely backward nation to security cooperation with the Taliban regime.

China was one of the first to offer humanitarian assistance to Afghanistan in the wake of the deadly earthquake that struck in Khost province bordering Pakistan early on June 22, killing more than 1,000 people, and injuring many more.

Earlier, in March, Chinese Foreign Minister Wang Yi made a surprise visit to Kabul and met with Taliban leaders ‘to discuss various issues, including the extension of political relations, economic, and transit cooperation’. Wang’s trip coincided with the visit of Russian President Vladimir Putin’s special envoy to Afghanistan, Zamir Kabulov, who met with the foreign minister, Amir Khan Muttaqi, among others.Apparently, this shows that the China-Russia dynamic was already at work in Afghanistan.

There is no gain saying that the American intervention in Afghanistan spawned new terrorist groups like the Islamic State-Khorasan (IS-K) and al-Qaeda splinters. The proliferation of these pan-Islamic groups gave a new lease oflife to the East Turkistan Islamic Movement (ETIM), an outfitwhich China accuses of spreading separatist ideology among Uyghurs and plotting terrorist attacks in the Xinjiang Autonomous Region of Western China. Beijing wants Afghanistan not to provide safe haven to the ETIM or other groups responsible foroccasional attacks in Western China.

In July 2021, before the collapse of the US-backed Kabul government, Taliban leaders had promised China that they would not allow foreign fighters to use Afghanistan as a base to attack China. And it seems that, after taking the reins of power, the Taliban relocated the Uyghur armed groups from Badakhshan Province in the northeast, close to the Chinese border, to Baghlan and Takhar provinces in central Afghanistan. However, reports have it that this did not go down well with the Uyghur separatists, pushing them closer to IS-K, which is responsible for many terror bombings and killings in Afghanistan. This is a big headache for the Taliban as well as China.

Another problem is the Tahreek-e-Taliban Pakistan (TTP), which operates on both sides of the Afghan-Pakistan border. The Pakistan Army has sought the Afghan Taliban’s cooperation to negotiate a truce with the TTP, an organisation mothered by the Pakistan army, but one thatwent rogue when Pakistan allowed American drones to strike at terrorist hideouts deep in the Pashtun-dominated Khyber Pakhtunkhwa and northern Baluchistan provinces of Pakistan. China, a close ally of Pakistan, has also been prodding the Taliban regime to help tame the TTP, in order to safeguard Chinese interests in Pakistan, particularly, the ambitious China-Pakistan Economic Corridor (CPEC) that could finally pass through Afghanistan, connecting Central Asia.

Given the dire economic condition of Afghanistan after the US withdrawal, the Taliban desperately expects economic support and investment from the Chinese side. This is perhaps the only glimmer of hope for them as the world has closed its doors in their face. As far as the Chinese are concerned, it does not matter whether Afghan girls go to school or women have any freedom.Beijing’s main bargaining chip is that the Talibanuse their brute force to annihilate other terrorist groups, especially the ETIM, a group that seeks to liberate Xinjiang Province and the Uyghur people from the grip of communism and impose Islamic rule there.Much like the people of the Tibetan plateau, the Uyghur people are victimsof genocidal suppression by the Chinese authorities and are very much against the communist regime.

The Chinese are also wary about the security of their technicians and workers in Afghanistan – all the more so after the rising number of terrorist attacks on Chinese citizens in Pakistan. Chinese industry, hungry for rawmaterials, sees a lot of potential in the explored and unexplored mineral wealth of Afghanistan, estimated to be worth more than one trillion dollars. Yet, while there has been much talk of the Chinese investing in different projects, nothing tangible has materialisedso far. One reason is that the Taliban has been unable to guarantee security for future projects that might come up. Terror attacks across Afghanistan have not abated and even Kabul is not safe. With the increase in terrorist attacks against Chinese citizens in Pakistan, China will not want to take similar risks in Afghanistan. It would prefer to wait till the Taliban consolidatesits position, allowing its writ to runthroughout the country. Even copper mining projects like Mes Aynak remain stalled, although the MoU was signed 24 years ago. Afghanistan has the world’s second largest copper deposits, and, perhaps, the largest lithium deposits.

China has also been working closely with Russia to fill the security void created by the US withdrawal. While Russia has security concerns and would not like any spill-over of fanaticism into the Central Asian countries from Afghanistan, the Chinese are trying to engage in the economic sphere. The Russians are also concerned about poppy cultivation in Afghanistan, as drug trafficking and opium addiction have become a menace in Russia. The Taliban has lately been cracking down on poppy farmers and destroying their crops. No one knows whether the anti-poppy drive is serious or mere tokenism.

In 2021, the Russians had significantly increased their military presence in Tajikistan and Kyrgyzstan following the US withdrawal from Afghanistan. It is not clear whether the troops have been withdrawn after it launched its military operations in Ukraine. China, too, has a military presence in Tajikistan near the Wakhan corridor. This obviously aims to protect Chinese investments in Central Asia. But it also provides China with an additional layer of security on its border with Afghanistan.

China is already entrenched in Afghanistan and waiting for the right moment to encash the riches hidden under the Hindu Kush mountains. Together with Pakistan, it could, over a period of time, extend the CPEC through Afghanistan to Central Asia. In fact, the western strategy of isolating the Taliban through sanctions and punishing them for their lack of civilised behaviour has helped the Chinese to embed themselves further in Afghanistan. Wouldn’t it have been better if the world engaged with whoever is ruling Kabul?