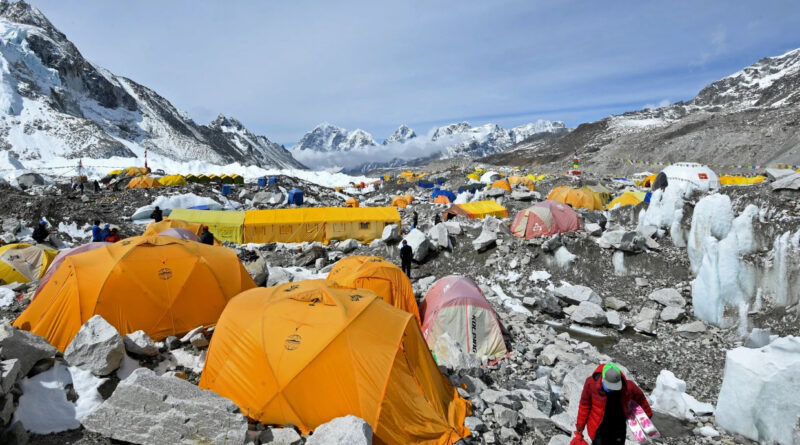 In June this year, the Nepal government announced that it was preparing to shift the Everest base camp. The camp, which is used as a springboard by those attempting to climb the world’s highest peak, is at present located at an altitude of 5,364 metres on the Khumbu glacier.

But global warming and climate change are causing the world’s glaciers to melt and the Khumbu glacier is thawingat a rapid rate and has become unstable. Deadly crevasses are appearing at the base camp overnight and with growing frequency, endangering the lives of mountaineers and trekkers. This has prompted the Nepali authorities to shift the base camp.

According to Taranath Adhikari, director general of Nepal’s tourism department, the new camp will be located at an altitude around 200 to 400 metres lower than the current one.

At a recent webinar, ‘Impending Himalayan water crisis: causes and effects’, hosted by The Democracy Forum (TDF), climate scientists and water experts discussed the many challenges that Asian countries are facing as a result of global warming and melting glaciers, as well as human activity.

Global warming is occurring at a faster rate in high-altitude regions around the world. TDF Chair Barry Gardiner MP pointed out that even if the world is to achieve the Paris Agreement goal of limiting global warming to 1.5 degrees Celsius compared to pre-industrial levels, we can expect to see a 2.1 degree rise in the Hindu Kush Himalayan region. This would result in a 36% loss of the current volume of glaciers in the region, he said.

According to research led by the University of Leeds and published in the journal Scientific Reports in December 2021, glaciers in the Himalayan region are shrinking at an ‘exceptional’ rate compared to those in other regions. These glaciers have melted ten times faster in the past few decades than the average rate over past centuries.

The Hindu Kush Himalayan region is often referred to as the ‘Third Pole’, as it is home to the third largest expanse of ice sheets in the world, after Antarctica and the Arctic. Nestling in this region are around 54,000 glaciers. Several of Asia’s mightiest rivers, including the Indus, Ganges, the Brahmaputra, Yangtze and Irrawaddy, are fed by these glaciers.

A vital source of freshwater, these rivers sustain the lives and livelihoods of around 1.9 billion people, support agriculture and ecosystems, and supply hydropower.

The melting of Himalayan ice sheets directly impacts the amount of water flowing in these rivers and is predicted to dramatically impact our lives. Indeed, its devastating impact is already unfolding in South Asia.

Natural disasters of greater magnitude are striking the region, and with growing frequency. On February 7, 2021, a portion of the Nanda Devi glacier broke off, triggering an avalanche and massive flash floods in the Dhauliganga and Alaknanda rivers in Chamoli district in the northern Indian state of Uttarakhand. Worryingly, the cleaving of the glacier happened in winter. Over 200 people are believed to have lost their lives and two hydropower projects suffered extensive damage in the disaster.

In June 2013, massive glacial lake outburst floods, accompanied by heavy cloudbursts, resulted in the Mandakini, Alaknanda, Bhagirathi and Kali rivers swelling suddenly. Kedarnath, an important pilgrim centre, was swallowed up by the swirling waters. As it was summer time in the Himalayas, tens of thousands of pilgrims were in the area when disaster struck; an estimated 5,000 people are said to have died.

It is not just the mountain areas that are likely to be hit by the impact of melting glaciers. Rising temperatures in the Himalayan region will bring floods and destruction to the lower reaches as well. The severe floods that have hit India’s Northeast and Bangladesh in recent months, which are said to be the worst in decades, were caused by heavy rains. While rains and floods are an annual occurrence in South Asia during the monsoons, this year’s floods hit the region even before the start of the monsoon season. It is likely that spring and summer this year, which saw northern India singed by repeated heatwaves, would have accelerated glacial melting.

Scientists say that the melting of glaciers will initially result in flooding of rivers that they feed. But over time, shrinking glaciers will mean the drying of rivers. Its impact will be felt most strongly on downstream populations, agriculture and energy production.

Over time, shrinking glaciers will mean the drying of rivers

According to a study by the Kathmandu-based International Centre for Integrated Mountain Development (ICIMOD), Utrecht University and others, global warming is causing glaciers to start melting earlier in the year, providing more water to crops that are sown then. However, this means that there is less meltwater available later in the year, when crops need it most. The shortage forces them to rely on groundwater, which is fast depleting.

As important as the quantity of meltwater available for crops is the timing of its availability. When crops are impacted, it devastates food security.

Among the main issues of concern regarding global warming in the Himalayas is that it is likely to trigger conflicts over water and exacerbate existing tensions over this fast depleting resource. The Hindu Kush Himalayan region is the site of the some of the most complex geopolitical conflicts.

Several of the rivers that have their sources in the Himalayan glaciers are transboundary rivers. The Brahmaputra River, for instance, originates in Tibet, snakes through India’s Northeast before entering Bangladesh and finally empties its waters into the Bay of Bengal. India is apprehensive that Chinese dam building activity on the Brahmaputra, known as River Yarlung Tsangpo in Tibet, will reduce the flow of water in the river. It is worried that China will open floodgates, resulting in worsening floods downstream. Bangladesh harbours similar fears about China and India.

Such apprehensions will intensify as global warming gathers pace and melts the Himalayan glaciers. It will result not only in floods, droughts and food insecurity, but in conflicts and animosity between peoples and countries over water.