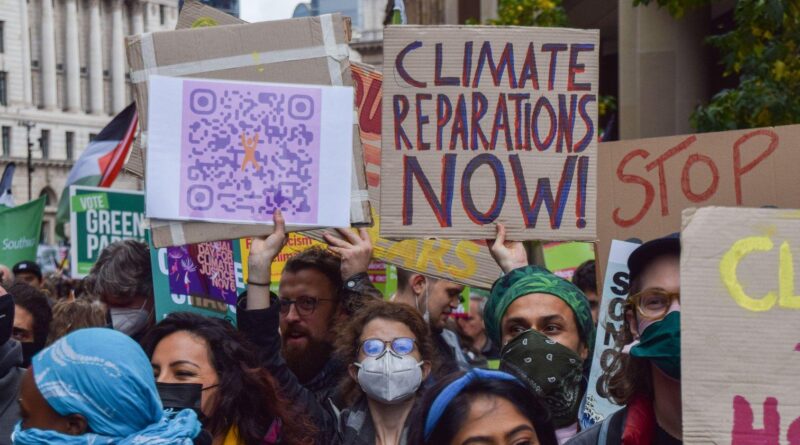 Natural resources have been plundered from poor countries for centuries, say activists, leaving a legacy of debt. Duncan Bartlett considers whether debt cancellation – or even reparations – are needed to help fund Asia’s response to climate change

Climate activists are calling for dramatic action in response to global warming.

Their demands are often repeated on social media, especially in the wake of natural disasters in Asia, such as the recent floods in Bangladesh, India and Pakistan. Their core ideas sound desirable and even, at first glance, straightforward: cancel the debts of poor nations and lend them money as they switch from fossil fuels to sustainable sources of energy.

Another suggestion is for rich nations to pay reparations for so-called ‘human, economic and ecological crimes committed in history’.

These demands are sometimes combined into a ‘manifesto for climate justice’, a phrase much used by left-wing groups.

It is easy to see the appeal. The slogans have a nice ring to them on Twitter, and people are inspired by their righteous tone.

Yet Twitter does not require a slogan to be scrutinised, and the costs are hardly ever mentioned on social media. Many commentators, who do address these matters more deeply, believe that the costs are unaffordable, and the proposed plans politically over-ambitious.

However, climate activists respond by saying that now is the time to stop worrying about money, given the huge economic disaster posed by global climate change.

So, in appraising the so-called climate justice manifesto, I’ve used my extensive experience in writing about economics to try to weigh up the policies.

Like many people, I am shocked and saddened by the increasing number of disasters linked to extreme weather in Asia.

Lidy Nacpil from the Asian People’s Movement on Debt and Development, based in Manila, believes that the government’s ability to respond to climate change is hampered by its obligation to use money to repay debt.

‘Illegitimate debts, debt servicing and conditionalities all straitjacket us,’ she says.

To get an idea of the scale of the debt, I turned to one of the national newspapers, the Philippine Star. It explains that the country’s external debt has been steadily rising from $73 billion in 2017 to $106 billion in 2021.

Despite the increase, the paper describes the approach to debt repayment as ‘prudent’ and claims the Philippines central bank has enough funds in reserve to cope.

The issue of debt relief is by no means confined to the margins of economic debate.

At a news conference earlier this year, the World Bank President David Malpass called for efforts to step up debt relief, warning that some middle-income countries are potentially at risk of defaulting, due to the cost of Covid, as well as attempts to speed the transition towards a low-carbon economy.

Yet when it comes to cancelling debt, or handing out loans, governments and international organisations take an understandably cautious approach. Their main concern is that money should not be mismanaged or wasted.

Take the case of Sudan in central Africa. Debt cancellation was the main objective of its civilian government, which worked hard on political and legal reforms. Sudan was on the verge of persuading the United States to remove it from the list of countries which are state sponsors of terrorism when suddenly the civilian government was overthrown by a military coup in 2021.

Since then, Sudan’s links to the World Bank and the IMF have been frozen.

In Asia, the government of Pakistan is currently seeking a loan of $37 billion to finance its debt and other payments. While it waits for the decision, inflation is soaring and the rupee dropped to 210 against the US dollar in the middle of June.

IMF loans come with conditions. In the case of Pakistan, the government must slash spending and raise taxes. Similar conditions apply in Sri Lanka in return for IMF loans.

Inevitably, these cause resentment. Climate activist Melani Gunathilaka describes it as ‘foreign interference’.

‘For countries like Sri Lanka to make good decisions for the energy adaptation plans, we cannot do it with other countries telling us what to do and how we can use the loans we have got from them,’ says Mr Gunathilaka.

In the view of the IMF and the World Bank, credit is an indispensable means of financing development. Japan and South Korea borrowed huge sums as they went through their rapid growth periods, during which their economies were transformed.

With this in mind, I believe there is a strong case for the international community to help nations through times of crisis. Yet ultimately, the goal is to nudge governments towards a responsible approach, so that they are trusted by the private lenders, enabling them to attract direct investment. Singapore provides an excellent example in this regard.

Elsewhere in South-East Asia, it is a major achievement of the government of the Philippines that it is now able to borrow money from the international markets to finance its climate change mitigation projects. It is doubtful that this would have happened if it had been ‘forgiven’ for all its previous debt.

Lastly, what of the most contentious concept on the manifesto: reparations, or compensation?

In the mind of the Filipino activist Lidy Nacpil, there’s a clear link between foreign debt, colonialism and reparations. The islands have been colonised by Spain, the United States and Japan. According to Ms Nacpil, ‘the problem of debt is a consequence of a long history of colonial and neo-colonial plunder of the resources and wealth of the South’.

At the end of the Japanese occupation period in World War II, the Philippines’ economy was in a sorry state: not a single coconut oil mill was operable.

Japanese businesses and investors soon returned to the islands and today, many Japanese corporations work with their Filipino partners on sustainable energy projects.

The real obstacle which stands in the way of paying reparations is the attitude of rich countries, which recoil at the suggestion that they should use the taxes raised by their citizens to make up for ‘loss and damage’ abroad, like criminals compensating victims.

At the COP26 conference in Glasgow last year, the governments of the United States and the European Union made it clear they were not going to authorise payments described in such terms, revealing a wide gap between the language of the idealistic climate change activists and the tone of modern diplomacy.

It is clear why the current financial response to climate changes seems a slow and frustrating process; even immoral in the mind of some activists. ‘Why are people talking and not taking immediate action?’ they cry.

Yet international relations are a complex issue, especially in the field of economics. Twitter manifestos are fine for igniting a debate and firing people up. The next stages of the process require a lot of time-consuming hard work.

Activists would do well to remember that politicians specialise in writing manifestos. They have also learned how to justify in careful words why they have fallen short of keeping all the promises they contain.