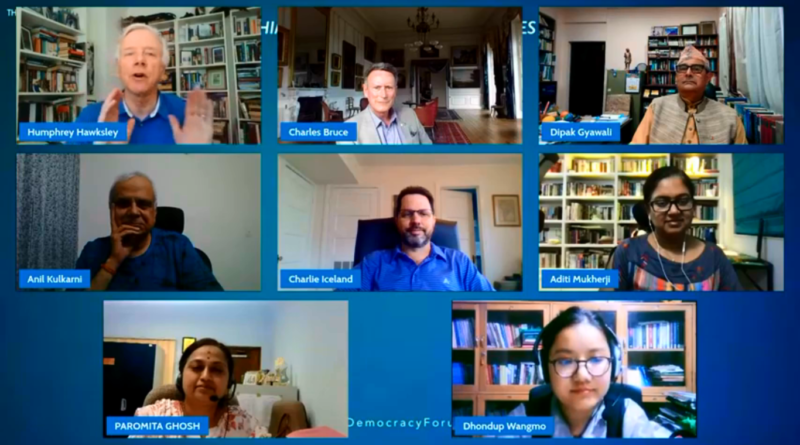 The weight of water

Asia’s ‘Water Tower’ was the subject of a recent  The Democracy Forum’s panel debate on the water crisis facing the region, and its impact both locally and globally

The politicisation of water and China’s responsibility to develop a more consensual approach to water in the Himalayas were among points discussed by participants at a June 22 seminar hosted by London-based not-for-profit The Democracy Forum, titled ‘Impending Himalayan water crisis: causes and effects’.

In his opening comments, TDF Chair Barry Gardiner MP spoke of how the webinar brought together complex natural phenomena such as climate change and its effects on fresh water, and the most complex geopolitical problems, such as the tense relationship between those countries that depend on Hindu Kush Himalaya. He addressed stresses in both water demand and supply: more use through increasing urbanisation, rising industrial production, intensive dam-building, etc, compounded, on the supply side, by the threat of climate change. Since climate rises faster at high altitude, even meeting the Paris goal of keeping to 1.5 degrees as a global average could still see a 2.1 degree rise in the HKH, a scenario that would see drastic glacier melt, which would have significant impact on food and energy production, and on wildlife. One-third of people living in HKH and depending on its resources already live below the poverty line, said Gardiner, and half face malnutrition – so the threat to agricultural production becomes a political issue.

Indus Water Treaty provides over 70% of glacial water to Pakistan, and less than 30% to India

The transboundary nature of the region’s water resources, added Gardiner, creates the potential for serious political and security impacts, and riparian countries need to seek opportunities for cooperation. Because China controls the Tibetan Plateau, it controls the head-waters of transboundary rivers that stretch across all four regions of Himalayan Asia. Yet its own needs are huge, with limited water supply and gargantuan demand. China’s upstream position gives it outsize power, and this hydrological asymmetry is matched by geopolitical asymmetry. China refuses to participate in multilateral forums surrounding transport boundary water use; instead, it negotiates through bilateral economic diplomacy, such as through the BRI, where it holds the whip hand. India’s existential fear is that China will someday divert the Brahmaputra River northward, while China also views India’s intentions through a security lens, seeing India as a threat. There are also deep wells of distrust between India and Pakistan over the Indus, and Gardiner wondered if the Indus Water Treaty is either comprehensive or malleable enough to deal with novel challenges such as climate-driven changes in Indus water levels.

Dr Paromita Ghosh, a scientist at the G.B. Pant National Institute of Himalayan Environment, approached the discussion on the Himalayan water crisis, its causes and effects from an ecological and socio-economic perspective. She addressed issues such as deforestation, climate change, melting and retreating glaciers, change in land use, landscape alterations by building roads, dams and hydropower projects and loss of religious and cultural values regarding water, all of which have led to the Himalayan water crisis.Scarcity of water is leading to loss of livelihoods in agriculture, tourism and other water-related occupations, argued Dr Ghosh, and also leads to food insecurity, while lack of clean water results in water-borne diseases and other health threats. Water deficit causes human conflicts too, not only across nations and states but at local and regional level, and is one of the major factors of outward migration from the hills. There is a need to create curricula in simple language, and local leaders are required who have knowledge of hydrological cycling in their region and are able to motivate people towards participatory conservation and management of Himalayan water. Social science, economics and ecology must be blended with hydrology and hydro-geology, concluded Dr Ghosh, to prevent the impending Himalayan water crisis.

Dr Anil Kulkarni, Distinguished Scientist at the Divecha Center for Climate Change, Indian Institute of Science, examined the fate of the Himalayan cryosphere under a warm climate and how this will affect water security in the subcontinent. He addressed issues of temperature change, decrease in rain and snowfall, the vulnerability of drying mountain streams, the problem of glaciers rapidly losing mass – especially in the Karakoram region, where there is little water coming from monsoons – and how investment is needed to help communities, particularly agricultural, affected by glacier melt. Dr Kulkarni also highlighted the great inequity of the Indus Water Treaty, which provides over 70% of glacial water to Pakistan, and less than 30% to India. With a differential loss in mass balance – the eastern river mass loss is higher than the western – this can influence water sharing.

Is the Himalayan water crisis ‘natural’ or the result of bad science, mal-development and mismanagement? wondered Dipak Gyawali, an Academician at Nepal Academy of Science and Technology (NAST), and a former Minister of Water Resources of Nepal. He looked at the drivers of the problem, the biggest of which is verticality, as people can’t carry water from great heights and the cost of pumping it is prohibitive. He also considered six different types and qualities of Himalayan water, saying that for each of these ‘problems’, there is not even an agreed definition of what they are or who created them, let alone solutions. Gyawali also addressed the concerns of very different social organising styles that regard water differently: for example, as private goods to be taken care of by the market and those with money; public goods, which need regulating by municipalities, government departments etc; or common pool goods. Himalayan waters are going to find salvation, said Gyawali, only when different organising stylesall find a place at the democratic policy table, and have their voices not only heard but also responded to. But, he concluded, we are very far from that stage.

The focus for Dr Aditi Mukherji, Principal Researcher, International Water Management Institute (New Delhi), was on some of the latest findings from the IPCC and the Hindu Kush Himalayan Assessment on the impact of climate change in the region. Climate change is man-made, not natural, she insisted, and human influence has warmed the climate at a rate unprecedented in at least the last 2,000 years. We are thus living in a climate-changed world – it is not a future phenomenon. Hot extremes are increasing in almost all regions, as is heavy precipitation, and this has an impact across the world. So, what do global changes mean for the Himalayas? she asked. HKH will warm more compared to the global mean and warm more rapidly at higher elevation. Even 1.5 degrees is too hot for the Himalayas, as at that temperature, glaciers will lose 36% volume by 2100.Regarding what these changes mean for the region’s water resources, Dr Mukherji spoke of climate justice issue – those that have contributed least to global warming, with the lowest carbon footprints, are worst and disproportionately affected. So while we need infrastructure, we need to rely less on hydropower and more on solar. The IPPC reports say this must be decade of mitigation, adaptation and adopt just transitions. Dr Mukherji concluded with the warning: ‘Every bit of warming matters, every year matters and every choice matters.’

Wangmo agreed with some previous speakers that climate change was anthropogenic, activities, and she spoke of the impact of the Chinese invasion of Tibet, such as excessive development and mining. On the question of how to save the Third Pole, Wangmo said importance should be given to ecological processes vital for sustaining the mountain system. With China being the supreme power of rivers flowing downstream, all involved countries should be integrated with China in combating the water crisis, and China should be pressurised into negotiating with them.  In the name of ‘development’, China’s continued dam-building has ignored human rights, and social and environmental impacts.Hydropower projects should, Wangmo stressed, be built only with the consensus of local people, while the wider issue should be addressed at a global level.

Offering an overview and broader perspective on water security and global water risk was Charles Iceland, Global Director, Water (Acting) at the World Resources Institute. He addressed the matter of chronic risk – using too much water relative to what we have naturally from rainfall – and episodic risk, such as flooding. Iceland also discussed problems of forced migration or displacement caused by water shortages, conflict over water scarcity, and spoke of how droughts and floods can contribute to food price spikes, food insecurity and subsequent unrest.  Like his fellow panellists, he addressed the political aspects of water, referring to the Indus Treaty, simmering tensions between India and Pakistan over water, and between India and China over potential damming.

In his closing remarks, TDF President Lord Bruce said the politicisation of water was a recurring theme throughout the seminar, and referred to the need for China, given its control of Tibet, to take responsibility for developing a more consensual approach to water in the Himalayan region.

Examining contrasting national security responses to the war in Ukraine from China, Iran and India, and the complex historical and economic reasons which lie behind such positions, was Burzine Waghmar, Inaugural Indian Visiting Fellow at the Royal United Services Institute. He spoke of support for Russia among India’s intelligentsia both right and left and also within the populace, with frequent complaints circulating on social media about how the USA came to age during the third Indo-Pakistan war of 1971, ignoring the fact how Kennedy saved Nehru’s and India in 1962. Meanwhile, while former officials at the Indian foreign office privately reminisce what a hard bargain Russia has been on trade and military deals, India is reluctance to denounce the invasion and displease China’s wrong side. The speaker noted that Sino-Indo flare-ups and fatalities have been ongoing since 2017 and that Putin has been very vocal in his displeasure of India joining the group. Indeed, even Mikhail Gorbachev as last visiting soviet premier made it plain to India in November 1986 that the USSR cannot be counted upon. Notably, the Soviets, like the Indians in 1962, had a brief border war with Mao in 1969 and Gorbachev oversaw the first joint demarcation settlement in 1999. Moreover, in terms of economics, India is the third largest military spender after the USA and China and second largest importer of weapons from Saudi Arabia. Since 2007, the USA has secured deals worth more than 21 billion dollars from India and India has spent over 800 billion in arms deals during the last 15 years from Russia. While the trio congratulate themselves on the strength of these ties, the relationships are in reality based on deception and lies and hallmarked by national interests.