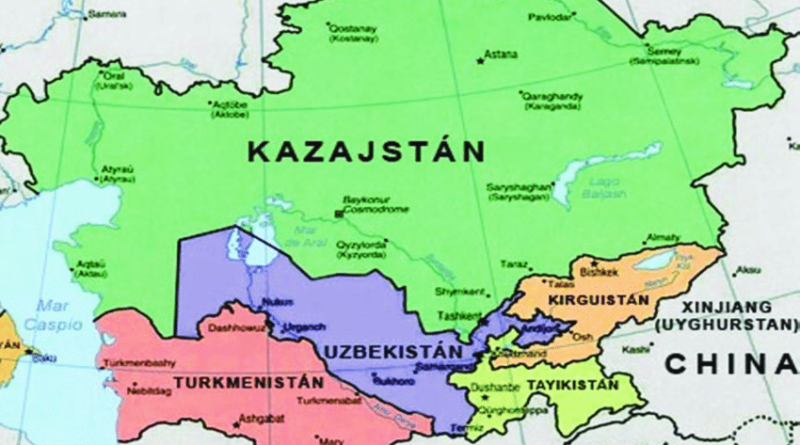 A region in turmoil

Yvonne Gill highlights the growing civil unrest and violent state crackdowns in Kazakhstan, Tajikistan and Uzbekistan, as the people stand up to their corrupt political elites

The ongoing Covid-19 pandemic and the current war in Ukraine, bringing rising energy and food prices, have, along with general inflation, led an economic downturn that is felt across the world. Nowhere is this more evident than in Central Asia.

Fed up with the oligarchies that rule the five former Soviet republics of Central Asia, Kazakhstan erupted at new year against gas price hikes in this energy-surplus country. In May, people took to the streets in Gorno-Badakhshan Autonomous Oblast (GBAO) of Tajikistan against extra-judicial killings.  And in July, protests swept the autonomous region of Karakalpakstan in Uzbekistan against the government’s move to strip the region of its autonomy.

So far this year, well over 272 people are reported to have been killed and hundreds injured in clashes and repressive measures taken by the state in Kazakhstan, Tajikistan and Uzbekistan.  As if taking a cue from each other, the governments blocked the internet and blamed foreign terrorists for the violence. Notably, the protests in all three countries began in poverty-stricken regions that have long been neglected. The politicians and the bureaucracy of these republics are thoroughly corrupt, wallowing in wealth while the common people suffer economic deprivation and joblessness. The governments have no accountability. Hence the frustration and anger among the people.

It all started in what activists describe as ‘Bloody January’, when hundreds of people took to the streets on January 2 in the oil-producing city of Zhanaozen in western Kazakhstan. The immediate provocation was the lifting of the price cap on liquefied petroleum gas and a subsequent sharp price increase. The protests quickly spread to other cities, including the nation’s largest, Almaty, where violent riots were witnessed. During the week-long protests and brutal state crackdown, 228 people were killed and over 9,900 were arrested, according to official sources. It was the worst violence in Kazakhstan since its independence.

President Kassym-Jomart Tokayev took the opportunity to initiate reforms and to strip the country’s former president, Nursultan Nazarbayev, of the clout he enjoyed among the powerful elite through his relatives and cronies. Tokayev also called in Russian troops under the Moscow-led Collective Security Treaty Organisation (CSTO) to stand by in case his security forces were overwhelmed by the agitators.

The Pamiri people, an Eastern Iranian ethnic group who are a majority of the 230,000 inhabitants of GBAO autonomous region of Tajikistan, have held a grudge against the government for neglecting the development of their region. Comprising almost 40 per cent of the country’s area, it is rich in minerals and other natural resources. Unlike other parts of Tajikistan, the GBAO has had a strong civic rights movement which the Emomali Rahmon government detests. Economic crisis grips the region, with unemployment as high as 30 per cent. The situation has worsened following the outbreak of the war in Ukraine.

Tensions have been high in the GBAO since last November, when Gulbiddin Ziyobekov, a young Pamiri minority representative, was tortured and killed by Tajik security forces. Two Pamiri men were shot dead and 17 wounded during the agitation that followed. Around mid-May, nearly a thousand protesters gathered in Khorog. They had declared that an indefinite agitation would be launched from May 16 onwards unless the regional leader, Alisher Mirzonabot, resigned and a proper investigation was conducted into the cold-blooded killing of Ziyobekov.

The army and police units went into action, putting up road-blocks in the city centre and major streets. They launched a pre-emptive crackdown, arresting informal leaders and identified protestors. The military and special forces violently dispersed the peaceful protesters, killing at least one and injuring many. The security forces attacked civilians using tear gas, stun grenades and live bullets. Internet across the entire GBAO region was blocked.

The highest number of civilian casualties was reported from the town of Vamar, the centre of the Rush on district on the road from Dushanbe to Khorugh. On May 17, a group of residents from Vamar attempted to block a military column that was moving to the provincial centre. The army and police opened fire on the crowd, killing dozens. Those who escaped were shot at from helicopters, say human rights activists. Reports have it that 40 civilians were killed. The forces are alleged to have thrown many of the dead into the Panj River.

A media blackout was imposed and journalists were ordered not to report the police action. Prominent human rights defenders were jailed on false charges. Hundreds were arrested in a region-wide crackdown. The government said it had launched a ‘counter-terror operation’ to cleanse the Gorno-Badakhshan region of anti-national elements. Tajikistan’s president of 28 years, Emomali Rahmon, is actually said to be preparing the ground to hand over the top job to his eldest son Rustam Emomali, currently Chairman of the National Assembly of Tajikistan and Mayor of Dushanbe. So the autocracy passes on from one generation to the other.

Tajikistan’s president of 28 years, Emomali Rahmon, is said to be preparing to hand over the top job to his eldest son

At the beginning of July Uzbekistan saw violent protests in the autonomous region of Karakalpakstan as people took to the streets in the region’s capital, Nukus. Soon the protests spread over to other cities. The people were angry because President Shavkat Mirziyoyev had proposed changes to the Uzbek Constitution that would take away the right of autonomous Karakalpakstan to secede from Uzbekistan by a referendum.

Uzbek government sources said 18 people died and at least 243 were injured during the first week of July. Mairziyoyev promptly announced that no such changes would be made to the Constitution. But an uneasy calm prevails in the province.

Karakalpakstan, an autonomous republic within Uzbekistan, is a unique example of how wrong agricultural practices, combined with climate change, can lead to an environmental catastrophe. Though it forms almost 37 percent of Uzbekistan’s territory, its population of 2 million is less than 6 percent of Kazakhstan’s total population of 34 million. People living there are poor and suffer from many diseases as they breathe the toxic, salt and pesticides laden air that blows off the arid part of the Aral Sea, which is drying up.

The region became a part of Uzbekistan in 1993, but was given an option to secede through a referendum within 20 years. The Republic of Karakalpakstan has a separate constitution, Article 1 of which recognises the autonomy of the region. It has its own state emblem and an anthem. Ethnic Karakalpaks are mainly Sunni Muslims and culturally and linguistically related to the Kazakhs.

President Shavkat Mirziyoyev, who has been re-elected for a second term, wants to amend the constitution –which puts a two-term limit for the president – to give himself a third term. His mentor, Islam Karimov, who ruled Uzbekistan from 1991 until his death in 2016, wouldn’t have cared for such niceties. But Mirziyoyev wanted to do things the right way. While proposing the amendment, he ventured to suggest rephrasing the provisions giving rights to Karakalpakstan, including the right to secede – making the provision rather ambiguous.

Dauletmurat Tazhimuratov, a blogger and activist living in Nukus, took note of the proposed amendment on July 1 and called for a public protest. He was arrested. But as people started gathering in the city’s central market, the authorities released him. The next day, crowds of people surrounded the parliament building and agitation spread to other cities. The police hit back, killing many. Large numbers were charged with criminal acts. The president blamed Uzbek opposition figures in exile for provoking the violent protests.

Namesake democracy exists in the Central Asian Republics. The autocrats have had their way and created powerful oligarchies, which ruthlessly trample upon the rights of the people and plunder the public exchequer while fattening a small elite and creating unthinkable inequalities. Mirziyoyev of Uzbekistan and Kassym-Jomart Tokayev of Kazakhstan have taken baby steps to make the system less corrupt and responsive, but if the political elite don’t listen to the wakeup call of popular discontent, the ruling autocracies could well be in for a rude shock.