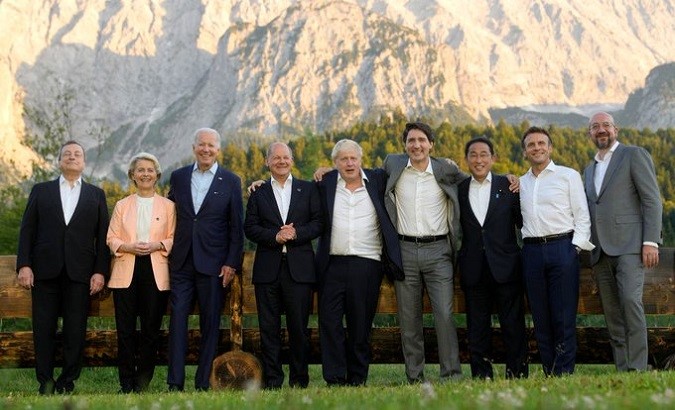 One may call these rivalries of the progressive kind.

Having long been concerned over China’s ambitious Belt and Road Initiative (BRI), whose aim is to create global infrastructure that will take Beijing to markets across West, Central, South-East and South Asia, Africa and Europe, the world’s developed countries are finally facing up to the challenge. They have announced their own multi-billion dollar funds to counteract the Asian Dragon.

In 2013, Chinese President Xi Jinping launched the BRI, which provides funds to developing countries to build infrastructure such as ports, roads and bridges.

China’s mega plan, funded by state-owned financial institutions, involves over 60 nations and is expected to cost $1 trillion by 2027. But, despite the praise it originally garnered, the initiative now faces criticism that it is predatory and destroys the host economies.

The West has been discussing ways to deal with the BRI challenge for some time, but it is only recently that it has been able to firm up a response.

Days after the US-led Quad –of which India, Japan and Australia are also members – announced a $50 billion infrastructure plan for the strategic Indo-Pacific region, the G7 (a group of seven wealthy nations comprising Canada, France, Germany, Italy, Japan, the United Kingdom and the United States) promised to mobilise $600 billion to counter the BRI over the next five years.

The Quad is part of the US strategy to offset China’s influence in the Indo-Pacific through regional partnerships, and it is presented as a forum of democracies against an authoritarian regime. The United States has been locked in a global race for supremacy with China over the past years, while the other three Quad members have their own disputes with Beijing.

Yet it was the G7 conclave held in Germany in June this year that was especially significant, as it was attended by the European Union and countries including Argentina, India, Indonesia, Senegal and South Africa, dubbed by German Chancellor Olaf Scholz as ‘democracies of the future and with a future’.

As well as expressing concerns over human rights violations in China’s Xinjiang province, the G7 also drew the world’s attention to Taiwan, which faces the threat of an invasion from Beijing along the lines of how Moscow violated Ukraine. Such an act of aggression would be bound to send economic ripples across the globe due to Taiwan’s dominance in the critical supply of high-end semiconductors, and would further add to the tensions between the West and China.

Both the Quad and the G7 members have taken note of the new-found Beijing-Moscow bonding, which presents a strategic as well as an economic challenge to the developed world. Already, the raging Russia-Ukraine war has disrupted global supply chains and impacted world economies.

Against this backdrop, the two mega funds announced by the Quad and the G7 aim to create meaningful, people-friendly infrastructure in the developing countries. This would, in the process, inject much-needed investments into the global system.

The move aims to match China’s global trade network, which creates economic value for the developing countries and stops them from fully embracing the Quad’s stated objectives.

Over the past years, China has used the massive funds at its disposal and routed aid through the various BRI projects to advance its business as well as its strategic interests across the world.

However, the flipside to the BRI story is making beneficiary nations wary of becoming embroiled in Beijing’s ‘debt-trap’ diplomacy. This has been witnessed in several countries across the globe, though nowhere has it been so glaring as in the collapse of the Sri Lankan economy.

In other parts of South Asia, China is pushing BRI projects worth $60 billion – the biggest so far is in Pakistan-occupied Kashmir – with the twin objectives of reaching West Asian markets through the Gwadar port in Balochistan province, and countering its main regional rival, India.

Understanding that developing countries needed heavy funding to boost their infrastructure requirements, the developed world drew up a plan called the ‘Build Back Better World’ at last year’s G7 summit in the UK.

However, the plan did not materialise. It was formally unveiled again this year at the G7 gathering in Germany under a different guise: the Partnership for Global Infrastructure and Investment (PGII).

According to the memorandum on the PGII, released by the White House, many low and middle-income countries lack adequate access to high-quality financing that meets their long-term infrastructure investment needs.

Internationally, infrastructure has long been underfunded, with over $40 trillion estimated to be needed in the developing world – a need that will only increase with the climate crisis and population growth, the memorandum stated.

US President Joe Biden, who aims to mobilise $200 billion for the PGII over the next five years through grants, federal financing and leveraging private sector investments, presented the plan as a ‘partnership of democracies’ versus ‘authoritarian’ China. The fund, he said, will mobilise strategic investments in areas vital to sustainable development and shared global security.

‘I want to be clear, the G7’s announcement of a new global infrastructure partnership isn’t aid or charity. It’s an investment that will deliver returns for everyone, including the American people, and boost all of our economies,’ Biden insisted, adding that it would ‘allow countries to see the concrete benefits of partnering with democracies’.

Beijing, suspicious over the West’s recent moves to rope in the developing and democratic countries against it, reacted to the G7 conclave as might be expected.

‘There is only one international system and one order in the world with the United Nations at the core and the international order based on international law, not the so-called system and order advocated by a handful of countries,’ a Chinese Foreign Ministry statement said, while alleging that the G7 was trying to push its ‘democracy versus authoritarianism’ narrative.

All eyes will now be on the G20 summit to be held in Indonesia in November, amid concerns that China and Russia could skip the meeting. Indonesia is the current chair of the G20 and India will assume the grouping’s presidency in 2023.

New Delhi’s plans to hold some of the G20 meetings in the Union Territories of Jammu and Kashmir and Ladakh have already made China’s protégé, Pakistan, anxious.

Among the other two invitees to the G7 summit, Senegal chairs the African Union and Argentina heads the Commonwealth of Latin American and Caribbean States, indicating the focus areas of the West.

How the economic outreach of the world’s wealthiest countries pans out and impacts China remains to be seen.