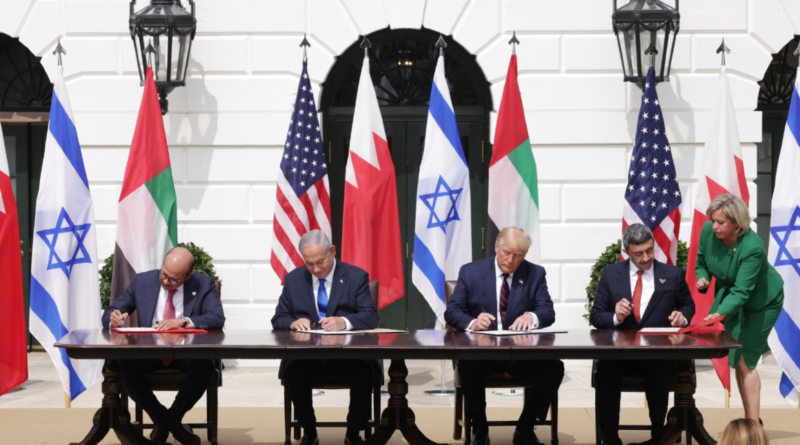 Tanya Vatsa reflects on the potential advantages of improved Arab-Israeli relations and a prospective ‘I2U2’ coalition, while warning against complacency over the Palestinian issue

The historic Arab-Israeli conflict has its roots in the post-colonial Partition Plan, which created the Jewish homeland of Israel in 1948. Millions of Palestinians were displaced, and the Arab heart continues to beat for the cause decades after regional territorial wars altered the map of the peninsula consisting of Israel, the West Bank, the Gaza Strip and the Golan Heights.

However, current foreign policy discourse has sought to change the ancient narrative and shift the axis of hostility between Tel Aviv and the Arab world away from Palestine. In hindsight, the impact of the Arab Spring caused massive turbulence in the political as well as economic discourse of the Arab autocracies. While the weaker ones succumbed to the fatal blows and spiralled into chaos, the stronger ones took the Western anchor to climb towards prosperous trade and economy. In the quest to become globally significant and geo-economically relevant, the historic issues may have taken a back seat. This has resulted in a warming of relations between the Arabs and the Jews.

The signing of the Abraham Accords between the UAE, Bahrain, Israel and the US in 2020 was the first step in the direction of normalising ties in West Asia. It opened diplomatic channels between the countries and dealt with cooperation in trade, tourism and security. Embassies were opened in Tel Aviv and Abu Dhabi for direct communication – a first between the Israelis and the Emiratis.

These Accords were symbolic of the current times, in sync with the changing winds. The tectonic plates underlying the regional power dynamics have shifted colossally since the advent of the 21st century. While the Emiratis sought to gain from their oil and generated wealth, the Israelis have constructively advanced their technology, economy and Jewish political influence in Washington. Apart from gaining from each other’s strengths, both nations form the core of American strategic assets in the most volatile region of the world. Such circumstances, coupled with the constant engagement in conflicts, have made cooperation in intelligence and security a solid building block for the new-found partnership.

Collectively and individually, the two stand to gain from a functional partnership. The rising clout of Iran, despite tremendous American pressure applied to that country, has shaken the power statistics in the Middle East. The US is assembling its allies to present a united front. At such a crucial time, when an old American ally like Turkey is declaring strategic autonomy, Tel Aviv and Abu Dhabi seem to have common enemies. With fragile domestic politics in Washington,the continued favourable partnership and influence enjoyed by Israel, irrespective of the ruling government, is an advantage the Emiratis might seek to gain from. For Tel Aviv, the Accords have marked a major policy change, ending its prolonged regional isolation and preparing it for future alliances, especially within Asia. They were also hailed as a strategic win for the Trump administration, considering it had little to boast about after the breakdown of talks with North Korea and the failure of its relentless sanctioning of Tehran.

Tel Aviv and Abu Dhabi seem to have common enemies

Chinks in the armour

The alliance seems to be the starting point for Israel’s inroads into the Arab heartland, with more nations likely to follow suit. Bahrain, Morocco and Sudan have already opened diplomatic channels with Tel Aviv. Many scholars consider this a betrayal of the Palestinian cause,since no serious breakthrough has been achieved to enable such acceptance by an Arab nation. Normalisation of Arab-Israeli ties was envisaged as a bargaining chip for a Palestine homeland. The Emirates, however, claim that the accord ‘immediately stops’ the annexation of the West Bank, while Tel Aviv says it ‘suspends’ action at their end. Hence, despite Abu Dhabi’s claims that they have signed a deal for ushering peace into the region, the perceptions of the two vastly differ, given their respective political trajectory.

Over a year after the agreement was signed, no consensus has been reached among the leaders of the Arabian Peninsula. Riyadh continues to raise the call for an independent Palestine, with East Jerusalem as its capital. In fact, the advancement of the Accords might result in a division among the Arabs on the question of Palestine. Meanwhile, the Israelis might misconstrue it as a diplomatic victory, leading to greater violence and resentment in the region. Another faction, the Houthis in Yemen, backed by Iran, launched missiles towards the UAE to express their disaffection with the said initiative, following the visit of the President of Israel.

The formation of I2U2

One of the more fruitful outcomes of the Abraham Accords, however, was the inception of the West Asian multilateral alliance, now being called I2U2 (India, Israel, the US and the UAE). Speculation was that it would imitate the ‘Quad’ military alliance in the Indo Pacific. But, despite the US’ habitual creation of military strongholds in distant strategically important regions, the I2U2 has started off on an economic developmental footing. The leaders of the four countries met to promote investments in water, energy, transportation, space, health, and food security.

The alliance might find it difficult to evolve into a military grouping, due to their lack of consensus on the security front.Tel Aviv and Abu Dhabi have no prima facie threats from Beijing and, apart from Washington, none of these nations hasentirely sanctioned Russia for its invasion of Ukraine. Unlike the Indo-Pacific, there isn’t a regional protection program which calls for the engagement of New Delhi, considering Tehran is a friend of India’s.

Tet, despite the foreign policy mismatch, each participant has much to add financially, materially and in their respective areas of expertise – Israel’s agriculture and defence technology, Abu Dhabi’s abundant energy, Washington’s wealth and global clout and India’s lightning economic and technological progress. The policy orientations of the member nations of I2U2 might vary, but the strength of the alliance lies in the diversity of gains its contributors have to offer.

For Israel, this is one of its first multilateral engagements on the geopolitical front, especially with Asian nations. As a resetting of ties ensues, there might come a time when Tel Aviv no longer needs Washington to broker participation. The Arab-Jew equation still remains in its nascent stage and much depends on how the regional politics will unfold as Riyadh continues to occupy the central stage.

The Emiratis and Israelis may have pulled a temporary lever on the Palestinian question but this must not create an illusion of any permanent settlements. In uncertain times plagued with a never-ending pandemic, an ongoing war in the continent, rising fuel prices and a glaring food crisis, every nation will require all the support it can garner from the world around it. The leaders of Israel and the UAE seem to have taken the necessary steps in their respective national interests.

Tanya Vatsa, a law graduate from National Law University, Lucknow and an incoming LLM candidate at the University of Edinburgh, is a former assistant advocate. She is currently a geopolitical analyst with The Synergia Foundation, an India-based think tank. Her writing on international relations has been published by the Diplomatist, International Policy Digest and The Kootneeti