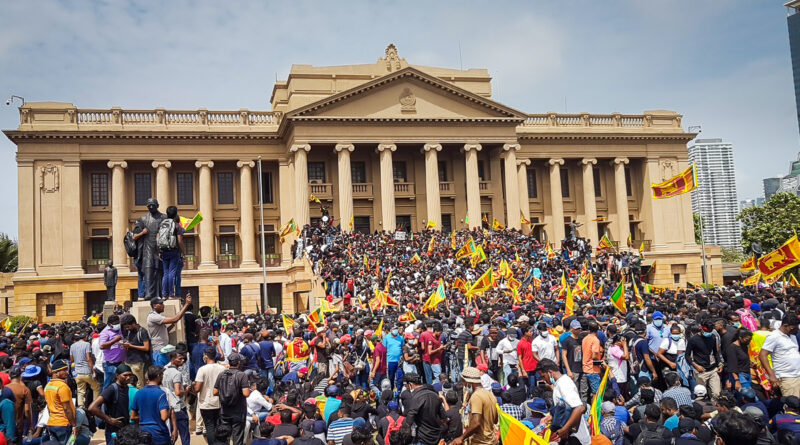 Sri Lanka’s former ruling family may have been ousted from office but, writes  Neville de Silva, they still have an ally at the pinnacle of power

Never in Sri Lanka’s 74-year post-independence history has a democratically elected leader been forced to flee the country, running away from the economic shambles and social disarray he was largely responsible for creating.

Gotabaya Rajapaksa, with 6.9 million votes under his belt, was elected president at the end of 2019. Two and a half years later, despite being a member of the most powerful political family in the country, he was forced out of his private residence on the outskirts of the capital Colombo by angry crowds, as essentials such as fuel, cooking gas and medicines ran out, and some foods were hard to find.

On April 1 the country’s president retreated to the 200-year old colonial building built by the last Dutch governor, Johan van Angelbeek, in the 1790s. Later it was sold it to the British, who named it variously ‘King’s House’and‘Queen’s House’, depending on the monarch at the time, and for many decades called it ‘Governor’s House’. That was until 1972, when Sri Lanka became a republic and shed its colonial appendage.

Since then, the majestic-looking building with sprawling gardens and manicured lawns has been the official residence of Sri Lanka’s head of state. It came to be known as‘President’s House’, though foreign journalists mistakenly call it ‘Palace’.

For almost four months President Rajapaksa lived in this high security area, guarded by contingents of police and military and rarely seen in public.

Meanwhile, ever multiplying numbers of Sri Lankan citizenry, led mainly by educated youth, angry and increasingly frustrated at the nepotistic and corrupt system under which the rulers, their cronies and political acolytes fattened themselves at the expense of the people and the state, demanded their resignation and return of stolen state assets.

Thousands set themselves up in the seaside promenade right opposite the Presidential Secretariat, another stately colonial building once home to the country’s parliament. From the early days of the protest movement this promenade where many thousands drawn from Sri Lanka’s multi-ethnic and multi-religious society pitched camp, was appropriately named ‘GotaGoGama’ –‘gama’ meaning village. The clarion call of the Aragalaya (struggle) was ‘GotaGoHome’, a demand for the ouster of President Gotabaya and the rest of the Rajapaksa clan, and his return to his Los Angeles home.

This was initially an orderly, peaceful and non-violent movement, until it was infiltrated by more politically-motivated and violence-prone youth.

The last days of Gotabaya Rajapaksa’s rule saw him his escaping by land, sea and air, starting from President’s House, where he allegedly used a secret underground tunnel that led to the nearby Colombo port. Eventually he landed in Singapore via neighbouring Maldives, with Singapore claiming he was on a visitor’s visa.

Earlier, he, his wife and entourage were reportedly set to fly from Colombo to Dubai on a Sri Lankan Airlines commercial flight. But the captain and crew refused to accommodate Gotabaya, who was still the country’s president, after a passenger apparently said he and his friends would man handle the entourage if they were on aboard.

All this seemed like something out of the pages of fiction, especially when the letter of resignation the president had promised to send the speaker of parliament on July 13 had still not reached him by 10pm.

Speculation was rife. Was this another sleight-of-hand to cling on to power, giving the Rajapaksas time to regroup and re-enter politics, with the help of the armed forces of which Gotabaya was still chief? Multiple stories circulated as the hours ticked by.

What is ironic, however, was the coming change of guard at the very top, even before Gotabaya Rajapaksa flew the coop and sent his belated resignation by email from Singapore. The document had been signed in the presence of Sri Lanka’s High Commissioner there on July 14, who arranged for it to be flown to Colombo expeditiously by a diplomatic staffer from the Sri Lanka mission, reports said.

What would have been considered political comedy straight out of ‘Yes Prime Minister’, had it not been so serious, are the events that followed the resignation of Gotabaya Rajapaksa’s elder brother Mahinda from the premiership on May 9 this year.

Pro-government armed thugs attacked peaceful protesters opposite the premier’s official residence, and later marched to GotaGoGama over a kilometre away, assaulting protesters there and destroying their make shift village, while the police stood by nonchalantly.

With Mahinda’s resignation, Gotabaya had to search for a new prime minister from outside his Sri Lanka People’s Front (SLPP) party that dominated parliament. While some he approached were consulting their respective parties, Gotabaya chose Ranil Wickremesinghe.

Some suspect that this was a ruse to make Wickremesinghe – said to be a friend of the Rajapaksas, which Wickremesinghe stoutly denies –‘hold the fort’, steering the country out of its economic mess, until the Rajapaksa clan could rebuild its political base.

The problem is that the public currently appears to have even less faith in Ranil Wickremesinghe than they do in the Rajapaksas. They are seen as belonging to the same political elite, which survives by scratching each other’s backs while the people bleed. Public ire turned against Wickremesinghe, as he and his party are considered to lack both political and moral legitimacy.

So his sudden rise from zero to hero in two months, becoming the country’s executive president without a people’s mandate,is viewed with grave suspicion by a public which has lost all faith in politicians.

Ranil Wickremesinghe had been prime minister five times. Three months ago President Gotabaya elevated him for the sixth time, though Wickremesinghe has never completed a full term and twice lost the presidential election in 1999 and 2005.

But his most humiliating defeat was in 2020, when the United National Party (UNP), one of the country’s oldest parties, which he has led for many years, was totally wiped out at the parliamentary election, losing every seat it contested, including his own.

His entry into parliament was in a way fortuitous. His party was entitled to one bonus seat for garnering 2 per cent of the national vote at that election. He grabbed it but bided his time  entering parliament. He did soonly in June 2021, when much of the derision that would have greeted him as a publicly rejected leader creeping in through the back door had died down.The Rajapaksa government, meanwhile, was too busy trying to undo the economic and other policy foolhardiness that had brought the country to its knees.

Observers believe that the Rajapaksas were willing to have Wickremesinghe complete the rest of Gotabaya’s presidential term, which runs for another two-and-a-half years, during which time he would look after the Rajapaksa interests.

Secondly Wickremesinghe has pro-US and pro-Western proclivities,which are critical to secure the assistance of the IMF and other international lending institutions and donor nations, needed for Sri Lanka to emerge from its economic shambles.

When the MPs voted on July 20 to elect the new president – as stipulated by the constitution – Wickremesinghe won 134 votes in the 225-member parliament. His opponent, a dissident SLPP-er but still a party member, received 82.

That was sufficient evidence for a sceptical public that a deal had been struck between them.

One of President Wickremesinghe’s first acts the day after assuming office was to let loose the police and armed forces on protesters still occupying the presidential secretariat and the protest site.

Hours before dawn, armed police and military swooped down on the sleeping protesters, including women and differently abled persons, and beat them up. They attacked lawyers who went to their assistance and, journalists, sending several to hospital.

What is difficult to fathom is why, so soon after assuming office, the president, who desperately needs international goodwill right now, should let loose the dogs of war on the innocent.

Some believe that President Wickremesinghe is trying to prove to the Rajapaksas, who nudged him into the top job that has eluded him so long, that he is ready to crush those who dislodged the Rajapaksa family from their political edifice.

Neville de Silva is a veteran Sri Lankan journalist who held senior roles in Hong Kong at The Standard and worked in London for Gemini News Service. He has been a correspondent for foreign media including the New York Times and Le Monde. More recently he was Sri Lanka’s Deputy High Commissioner in London