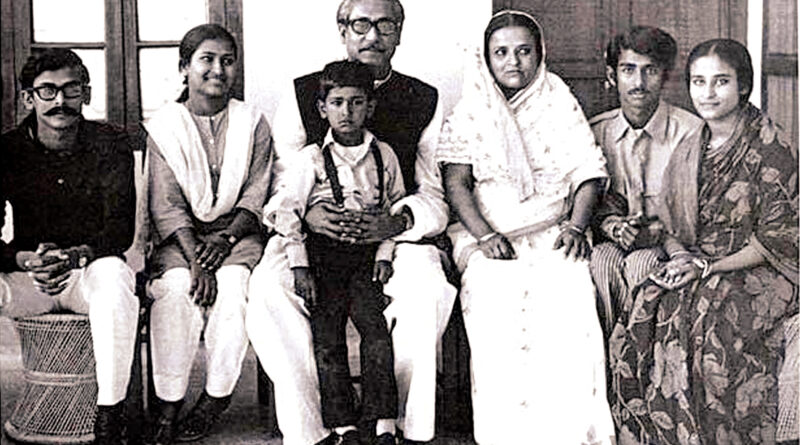 Syed Badrul Ahsan takes a trip down the long, tortuous road trodden by Bangladeshis since August 1975

Every August is a reminder for the people of Bangladesh of the biggest tragedy visited upon them: the assassination of their nation’s founder, Bangabandhu Sheikh Mujibur Rahman. Along with Mujib were killed, on 15 August 1975, most members of his family, at the hands of renegade soldiers. Only his two daughters, Sheikh Hasina and Sheikh Rehana, survived, for they happened to be abroad at the time.

Twenty-one years would go by before the rule of law was restored in Bangladesh, through the return to power, in June 1996, of the Awami League, led by Mujib’s daughter Sheikh Hasina. Even so, at this point it is fitting and proper to offeran overview of the ramifications of the 1975 assassinations, the fundamental objective of which was to inaugurate a medieval political system that undermined the four core principles of Bangladesh’s statehood – nationalism, socialism, secularism and democracy – enshrined in the country’s constitution, as it was adopted in November 1972.

Once the murderous majors and colonels seized the state on the morning of 15 August, they installed Khondokar Moshtaq Ahmed – the commerce minister in Mujib’s government, whose role in the planning and implementation of the conspiracy has never been in doubt – as the country’s new president. News of the coup in Dhaka cheered the Pakistani government of Zulfikar Ali Bhutto, who swiftly announced his recognition of the ‘Islamic Republic of Bangladesh’, when in fact the state remained a People’s Republic, despite the clear Islamic tenor employed in the assassins’ pronouncements.

Within days of Mujib’s assassination, formal recognition of Bangladesh’s independent existence was granted by China and Saudi Arabia, two countries which had been opposed to its1971 War of Liberation.Meanwhile, the usurper regime of Moshtaq began to convey every sign of the rightwing nature of the change that had come over the country. Terms reminiscent of Pakistan-era politics, such as ‘Bangladesh Zindabad’ in place of ‘Joi Bangla’ and ‘Nara-e-Takbir’, entered the political lexicon.

At the end of September 1975, the Moshtaq regime promulgated the infamous Indemnity Ordinance, which barred any questioning about the assassinations, or the trial of Sheikh Mujibur Rahman’s assassins in any court of law in Bangladesh. The ordinance was subsequently to be incorporated into the fifth amendment to the country’s constitution by the military regime of General Ziaur Rahman in 1979. Zia seized power after a series of coups and counter-coups which left many Bangladesh army officers, all freedom fighters, dead in early November 1975.

November 1975 was a period of renewed bloodletting in Bangladesh, with leading political leaders and military officers murdered in prison and in the cantonments. General Ziaur Rahman, himself a freedom fighter, had no qualms about fiddling with the constitution. Through dictatorial fiat, he removed the principles of secularism and socialism from the constitution, replacing them with his concepts of belief in Allah and social justice.

In terms of damage to the structure of the state, Ziaur Rahman and his followers went even further when they imposed the concept of ‘Bangladeshi nationalism’. That was an assault on Bengali political heritage as exemplified by Bengali nationalism, the political means through which Sheikh Mujib and the Awami League had voiced Bengali aspirations in pre-1971 Pakistan, and during the course of the War of Liberation.

The Zia period was dominated by a series of attempted coups d’état, 18 in all, against his regime, followed by swift government retribution. Hundreds were sent to the gallows or shot out right at the end of every abortive coup. Zia fell on the 19th coup attempt in Chittagong in May 1981. The details of the coup remain shrouded in mystery to this day, but what has never been a mystery is that once again, a number of military officers were marched to the gallows in the aftermath of Ziaur Rahman’s assassination.

Zia’s killing was followed by an interregnum lasting a few months, in the course of which his vice president, the elderly Justice Abdus Sattar, was elected president in his own right in November 1981. But the Sattar government was overthrown by the chief of army staff, General Hussein Muhammad Ershad, on 24 March 1982. It was the beginning of the second phase in Bangladesh’s journey through political darkness, for Ershad built on Ziaur Rahman’s communal politics.

Where Ziaur Rahman had opened the doors to former collaborators of the Pakistan occupation army to return to politics in a country whose birth they had violently opposed in 1971, Ershad appointed many of them to his cabinet. Moulana Abdul Mannan, accused of being a mastermind behind the murder of Bengali intellectuals on the eve of Bangladesh’s liberation, became religious affairs minister in the regime.

The period following the tragic events of August and November 1975 saw Bangladesh subjected to the ordeal of watching its progressive politics subjugated to a revival of communalism in an overt form. General Ershad decreed Friday as a weekly day off, ostensibly to pander to Muslim majoritarian sentiments. Worse, he imposed Islam on the country as the official state religion. It was a step which immediately relegated all other religions in the country to second class status and clearly stood the constitution on its head.

Gen. Ziaur Rahman’s presidency was dominated by a series of attempted coups d’état

Ershad’s ouster through a popular movement in December 1990 did not matter much, in so far as a return of the country to its original ideals was concerned. The government led by Khaleda Zia, the widow of General Ziaur Rahman, elected at the February 1991general elections, carried the process of de-secularisation further through its alliance with the Jamaat-i-Islami, a party notorious for its collaboration with the Yahya Khan regime and the liquidation of Bengali intellectuals in 1971.

During her second stint in government between 2001 and 2006, Begum Zia took into her cabinet Motiur Rahman Nizami and Ali Ahsan Muhammad Mujaheed, infamous for their pro-Pakistan activities in 1971. Also brought into the fold was Salahuddin Quader Chowdhury, who, along with his father, played a leading role in the capture and murder of Bengali freedom fighters in Chittagong in 1971.

Bangladesh’s darkness did not lift until June 1996, when Sheikh Hasina led the Awami League, her father’s political organisation, back to power 21 years after his death. In the course of leading the country, a process interrupted between 2001 and 2006, Sheikh Hasina has been rolling back much of the detritus of the Moshtaq-Zia-Ershad-Khaleda period. The infamous Indemnity Ordinance has been repealed; six of Bangabandhu’s assassins have been tried and executed, while five others remain fugitive outside the country; and a number of the collaborators of the Pakistan occupation army have been tried for war crimes, convicted and sent to the gallows.

And yet much remains to be done, given that the dark legacy of the military and quasi-military regimes is yet to be fully wiped out. In recent years, the murder of liberal writers and thinkers by Islamist fanatics has been a cause of grave concern for the country. The series of assaults on Hindu homes and families, the latest instances being the attacks on Hindu families in Narail, are proof of how much remains to be done to cleanse the country of the evils it is up against.

And let it not be forgotten, either, that Sheikh Hasina’s government itself has been under grave and justified criticism over its use of such draconian laws as the Digital Security Act, a law which clearly impedes the functioning of a free media in Bangladesh.

In the region of the economy, the Prime Minister has presided over a robust growth of GDP and has overseen an expansion of both agriculture and industrialisation across the country. The government’s efforts in providing relief to Rohingya refugees fleeing Myanmar has put strains on the national economy and yet it has done its job well. The Padma Bridge, recently inaugurated, is a powerful sign of the confidence Bangladesh exudes today in looking to the future.

Today, it is a proper democratic order based on unfettered secular principles and social justice to which the people of Bangladesh can look forward. A mature leadership, one which is decisive in its approach to the issues and capable of leading the nation into a difficult future – climate change, global economic recession, regional military conflict – is the need of the hour. Sheikh Hasina is clearly equipped to carry out such a role.

But then comes the question: ‘After Hasina, who?’